Nearly half of bank robbery cash found on arrested trio

The arrested trio — from Jharkhand — are Prabhakar Sikdar, 32, and Arun Sarkar, 31, both from Sahebganj, and Biswajit Rai, 26, from Radhanagar 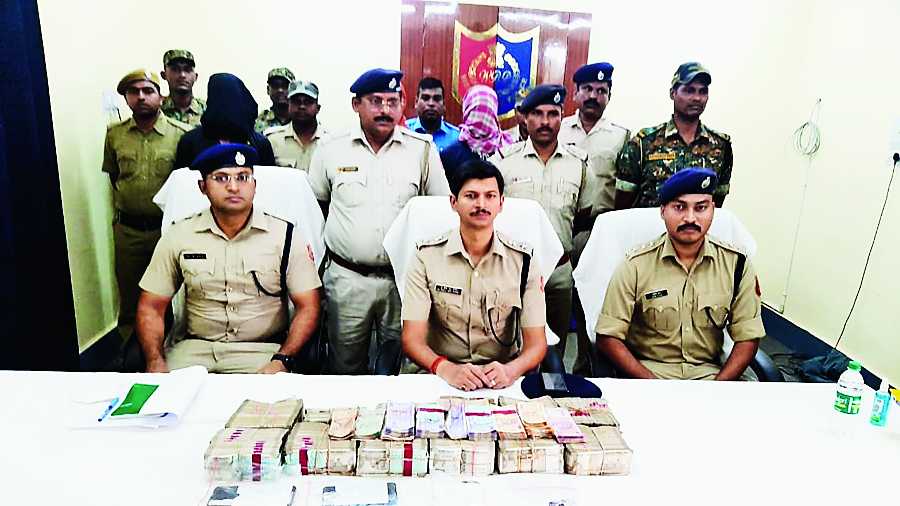 Jangipur police district SP Bholanath Pandey on Thursday said Rs 54.67 lakh of the Rs 1.1 crore robbed from a private bank in Farakka on Wednesday had been recovered.

Speaking to reporters at Farakka police station, Pandey said masked robbers had on Wednesday made away with Rs 1.1 crore in cash from the vaults of Axis Bank at NTPC More in Farakka. “However, Rs 54.67 lakh has been recovered,” said Pandey.

The recovery, Pandey said, was possible as cops had nabbed three suspects immediately after the robbery.

The arrested trio — from Jharkhand — are Prabhakar Sikdar, 32, and Arun Sarkar, 31, both from Sahebganj, and Biswajit Rai, 26, from Radhanagar.They were produced at the Jangipur additional chief judicial magistrate’s court and remanded in 14 days of police custody.

Police sources said on Thursday that three teams led by the additional SP, the SDPO, and the IG (Farakka), respectively, were carrying out raids in Jharkhand to arrest the rest of the 10-member gang.

BSF authorities stopped one Ansar Ali, 26, on Wednesday night near the India-Bangladesh border zero point in Firojpurchar and found eight gold bars weighing 922gm on him, valued around Rs 51 lakh.

BSF authorities said bike-borne Ali was suspected to be smuggling gold from Bangladesh. He has since been handed over to customs authorities. He was produced at Jangipur additional chief judicial magistrate’s court on Thursday and remanded in police custody for three days.