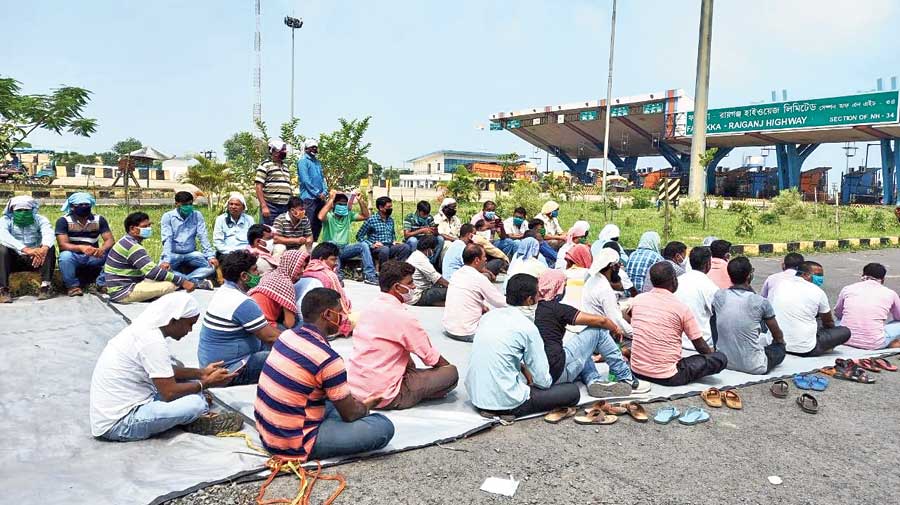 Officials of the National Highways Authority of India (NHAI) in Malda have been caught in a deadlock by two movements, both of which are being spearheaded by the Trinamul Congress.

On one hand, the district Trinamul and its youth wing are staging protests and sit-in demonstrations demanding immediate repair of the stretch of NH12 that passes through Malda.

On the other hand, around 400 workers, who are backed by the All India Workers’ Federation that is close to Trinamul and have been engaged by a company that is developing the highway, have decided not to join their duties. They have decided to refrain from repairing the road or running the toll plaza at Baishnabnagar in Malda because of non-payment of their wages for over nine months.

In total, around 1,100 workers serve under the Hindustan Construction Company Limited (HCCL). On Wednesday, over one-third of them assembled near the office of the company in Baishnabnagar, demanding immediate payment of their dues.

“Repair of the damaged stretches of the NH is likely to commence from the first week of next month. But if we are not paid our dues, we will not join the work,” said Ramesh Singh, one of the demonstrators.

According to them, the total dues of the workers are around Rs 20 crore.

“The workers who serve here are from different states. Their salary and wages have been pending for nine months. They will not join the repair and expansion work of the highway if they do not get their dues,” said Sunil Sarkar, general secretary of federation.

The demonstrating workers might also close down the toll plaza on October 8 if they are not paid by then, said sources.

On September 16, district Trinamul leaders had sat on a “dharna” in front of the toll-plaza in Baishnabnagar. The agitation was withdrawn only after the NHAI officials gave it in writing that the repairs would start from October.

Recently, a delegation of Trinamul Youth Congress had submitted a memorandum to the project director of the NHAI, reminding him of his promises.

“The private company and the NHAI will have to see how they can arrange the salaries and wages of the workers. We want the repairs to start in the interest of lakhs of people who commute on the highway every day,” he said.

With such being the situation, officials of HCCL said they were trying to arrange for funds.

“The issue has been conveyed to higher authorities. We hope a part of the dues would be paid ahead of the festive season,” said Gautam Biswas, a personnel manager of the HCCL, who conceded that the workers had not been paid their dues for around nine months.

The demonstrations by Trinamul and the workers have also put the NHAI authorities under pressure.

D.K. Hansaria, the project director of NHAI in Malda, said they had plans to start the repairs from October as the monsoon would be over.

“We hope the problems would be resolved and repair works will start soon,” he said.