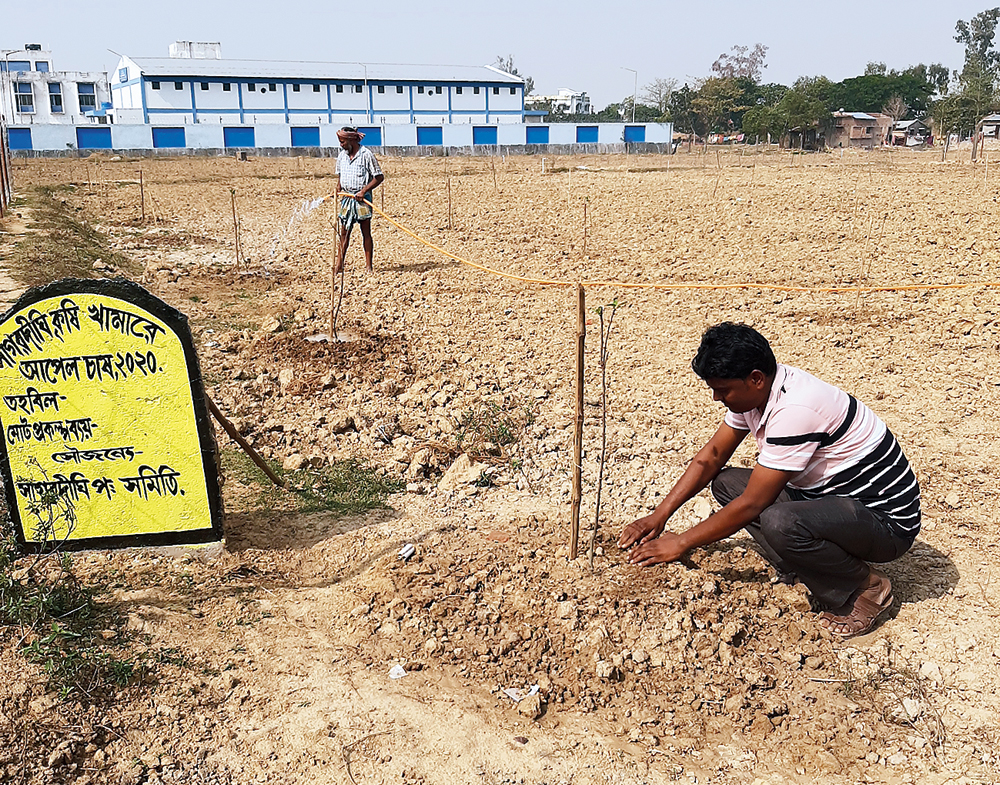 Four villages in Murshidabad’s Sagardighi have started a trial run of an ambitious agricultural project that, if successful, will ensure employment for thousands of skilled youths.

Local body functionaries, aided by officials of department of horticulture and forests, enlisted the help of the Indian Institute of Spices Research in Meerut last month to begin planting 1,400-odd Italian apple saplings on small patches of land at Sagardighi, Kabilpur, Dhumarpahar and Chandpara.

The initiative is the first effort for job creation at the local level announced by the administration following the killing of five migrant labourers from Sagardighi’s Bahalnagar in a terrorist attack in Kashmir’s Kulgam in October last year.

District officials had said then that seasonal wage opportunities on Kashmir’s apple orchards attracted roughly 30,000 youths from Murshidabad, who earned anywhere between Rs 25,000 and Rs 35,000 in less than two months.

“But the terrorist attack made all of them come home. They are all unemployed now because our agricultural economy is not strong,” said a panchayat official.

“We have seen a successful cultivation of apples in Bankura, so why not in Murshidabad,” asked Ray, explaining that the Italian variety of apples were far more amenable to tropical climates than the Kashmiri varieties.

“Italian apples require 2,000 hours of cultivation at 10 degrees Celsius, which is possible in Murshidabad in winter,” he said, adding that the variety could withstand temperatures up to 40 degrees.

In late January, the first signs of an apple tree sprouting leaves was visible on the panchayat samiti’s 1.5 acres of land in Sagardighi that has been given out for farming the tree. Similar results were reported at Kabilpur’s 1-acre plot and the half acre plots at Dhumarpahar and Chandpara, respectively.

“If we are able to successfully establish apple cultivation here, then it would mean a lot for the local economy,” said Ray. “All unemployed youths, who are now unable to make their yearly journey to Kashmir, will have jobs at hand right here,” he added.

Bahalnagar resident Noor Alam and Popara resident Ainur Sheikh both made yearly journeys to Kashmir for more than 12 years before returning for good in November last year.

“The Kashmir journey was a happy one for us. But since it is a thing of the past, we can hopefully begin a new future in apple cultivation at home itself,” said Noor.

A professor of horticulture and orchard department at the Bidhan Chandra Agricultural University in Kalyani said: “Cultivation of apple in tropical climate is a major experiment. Personally, I have doubts about the quality of the fruit, particularly in hot and humid climate of south Bengal where mercury level often cross the 40 degrees mark. Nevertheless, it is a laudable initiative. If the quality of the fruits do not come according to the expectation, it will be difficult to sustain the project in future.”

Sagardighi BDO Subhankar Kundu said: “Thousands of these youths are in dire need of employment. We are monitoring the efforts at apple cultivation in the district and will provide financial help as required. We hope it will be a success.”