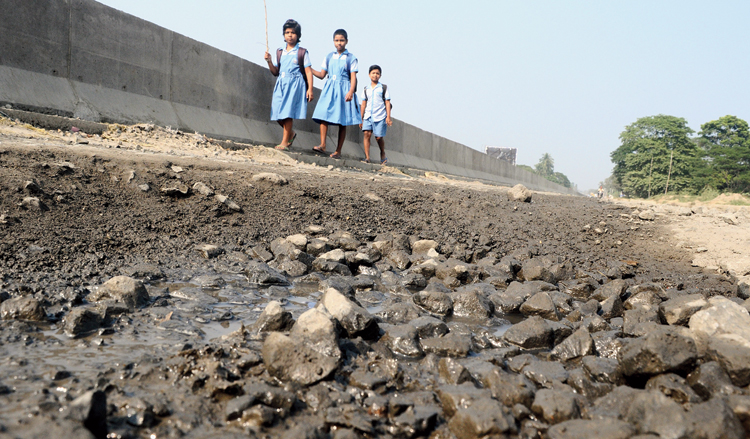 The first few phases of the nationwide lockdown had brought traffic to a screeching halt but the advantage of an empty NH12 was not used by its keeper to treat the battered and bruised surface of the highway that remained without repairs for years.

The highway connects Bakkhali down in south to Dalkhola up in north while crisscrossing the districts of South 24-Parganas, North 24-Parganas, Nadia, Murshidabad, Malda and North Dinajpur.

The National Highways Authority of India has promised prompt action to treat NH12.

“Negotiating NH12 is no less an exploration as the surface has been resembling crater-filled moon surface at some spots, underdeveloped village road for long stretches and killer cesspools elsewhere for years,” said a motorist.

The widening of NH12 (formerly NH34), widely regarded as the spine of Bengal as it links the south of the state to the north, had started during the Left Front regime in 2009 and was supposed to be completed by 2013.

But the project to widen the 84km Barasat-Krishnagar stretch ran into protests orchestrated by the Trinamul Congress against land acquisition in 2009. The work came to a grinding halt with the change of guard in Bengal in 2011. The Mamata Banerjee government made efforts to acquire land in 2015 when the stretch had turned into a nightmare for motorists. 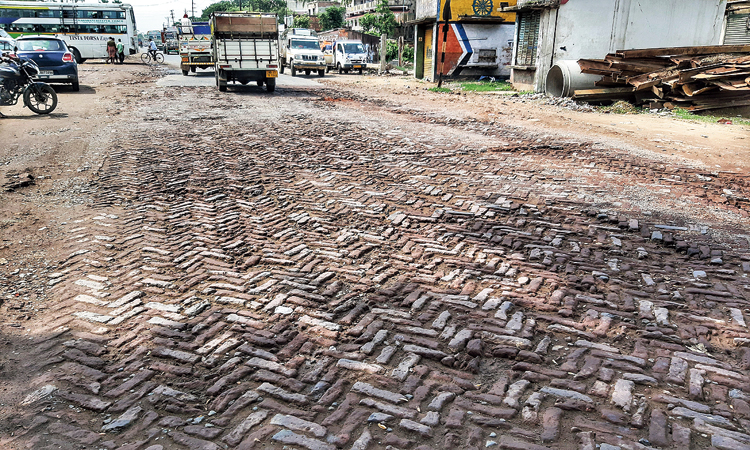 The issue snowballed into one of political one-upmanship in 2017 with Prime Minister Narendra Modi pulling up the Mamata government for delaying the widening of the highway between Barasat and Krishnagar and escalating costs by more than three times from Rs 800 crore in 2010 to Rs 2,600 crore then.

In the following two-and-a-half years, things didn’t change much for the highway as motorists continue to risk their lives while the NHAI keeps itself content with patchworks. In October last year, the NHAI started the much-awaited widening of the 67km stretch of NH12 from Baro Jagulia to Krishnagar. Just before that, widening of an adjoining 26km stretch from Baro Jagulia to Barasat had been undertaken. But the work and the traffic on either stretch were suspended following imposition of the lockdown to battle the novel coronavirus.

Sources said the NHAI, the keeper of the highway, should have sought special permission from the state government to carry on with the work while adhering to Covid-19 protocol.

With the state government gradually relaxing lockdown norms over the past few weeks, a large number of vehicles started plying on NH12, further damaging different stretches and exposing motorists to the risk of accidents.

Chandan Sarkar, a professional driver, said: “It becomes difficult to undertake maintenance with vehicles on the move. I shudder to think of the condition of the highway when it will rain.”

A major part of the stretch between Baro Jagulia and Krishnagar is particularly risky for vehicles. The NHAI had planned to repair the stretch while widening it but the lockdown-induced delay has turned it into a nightmare for motorists.

On the other hand, a major part of the nearly 6km stretch from Amdanga to Barasat has turned worse. A large stretch between Moyna and Suripukur, where widening began last year, has made little progress turning the road into a pool of rubble and dust that turns into a lake whenever it rains.

NHAI project director Soutam Pal said: “We will soon resume maintenance from the Krishnagar end by next week. We will begin with filling up potholes on a priority basis to make the road motorable. There are several cratered stretches in the Ranaghat portion of the highway. It will take a month to complete the job. However, the bituminous layer will be laid only after monsoon.”

“However, the job on the stretch between Baro Jagulia and Barasat will take at least two months to complete. Work on the stretch will start on Monday,” Pal added.