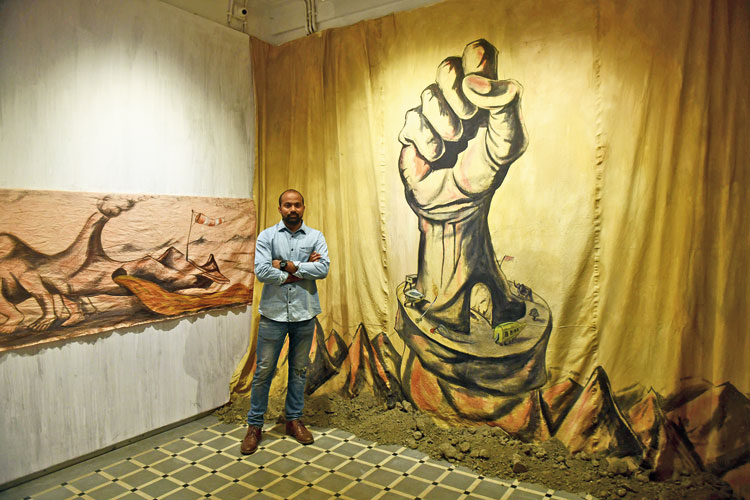 The topicality and relevance of Prabhakar Pachpute’s work become apparent when you realise that only a few days ago, social media was in a frenzy over reports that proved to be false of huge gold deposits — five times the volume of the country’s existing gold reserve — being discovered in Uttar Pradesh.

Speculation was rife about the golden future of that state in turmoil, and although the Geological Survey of India shot down the reports almost the very next day, the sensation they created is a measure of human greed, and that, too, for what was, in effect, fool’s gold.

The artist, born in 1986, has a remarkable ability to examine with detachment human rapacity and amorality through his huge drawings on stretches of canvas and installations using naturally available materials and pigments and stop motion animation.

Villages blackened with soot are denuded of their greenery by mining. Hillocks like waves in an ocean disappear as they are mined for coal. A giant clenched fist raised above the parched land out of which it seems to have shot up in an explosion of anger. The land is furrowed by years of ceaseless mining. A human being or a body part that has turned into a machine. The roving (literally) eyes behind a pair of binoculars scanning the terrain for traces of ore. These are some of the signposts of Pachpute’s art that quietly seethes with anger and despair.

He investigates the relentless depredation of nature and our environment by humankind, and the devastating effect it has had on us both physically and mentally. These are issues he deals with in his current exhibition, Beneath the Palpable, (till April 4) at Experimenter’s 45 Ballygunge Place gallery.

Yet, when you learn that this bearded and balding man dressed smartly in denims was born in a remote Maharshtra village named Sasti, whose father was a small farmer, and who went to local schools, you cannot help wondering how he manages to speak English so well, never going wrong on any art historical term. And that is the story of Pachpute’s struggle as an artist and a human being deeply involved in the affairs of those for whom life is an everyday battle to remain alive.

When I met Pachpute recently at Experimenter, he was categorical about the fact that “I have always been interested in the human body. Everything is connected to what I feel and what I see. I am always looking back to my hometown experiences.”

That included the mines where many of his relatives worked. In his growing years art was remote from his life, and his schooling was in three towns of Maharashtra, all Marathi medium. Yet he was always interested in drawing, and his neighbour, Manoj Bobade, an artist, poet and writer, had introduced him to Marathi literature.

The turning point in his life came when he joined the Indira Indira Kala Sangit Vishwavidyalaya, of Khairagarh in Chhattisgarh because it was cheap, and there he became acquainted with music, theatre and dance. The head of the department was sculptor Shiva Prasad Choudhury from Tripura, who was trained in Santiniketan. Pachpute’s perspective changed as he met students from all over India and made friends with those who knew English, a language he was interested in learning. At MS University of Baroda, knowledge of English was imperative.

Pachpute moved to Mumbai in 2011, and began to assist Tushar Jog, the artist who died young in 2018. Clark House Initiative, a curatorial collaborative and a union of artists based in Mumbai, provided him with a platform for sharing and exchanging ideas. Finally, it was extensive travel that shifted his outlook. In 2014, he was invited to the Sao Paolo Biennale, when he travelled extensively in South America visiting mines — salt, iron, lignite, gold — and marble mines in Carrara, Italy. “That’s how I developed my concept of mining,” says Pachpute.

His dissertation at Baroda was on exploring the possibilities of drawing, and his stop motion animation videos (he used YouTube for technical know-how and sought the help of a friend as well) are an extension of that.

His large wall drawings are site specific, and he challenged himself as they evolved and grew in size. “They are ephemeral, connected with the concept of destroying, which is linked with mining,” says Pachpute.

The humanoid characters he creates developed from doodles and sketches. “The human body has gone far in engaging itself with new technology,” so he is “breaking the form” as humans interact with tools.

His farming background brings Pachpute close to peasant movements as well. The giant fist signifies “akrosh” or anger and acrimony that finds expression in the march of farmers from Nasik to Mumbai in 2018. Wildfires spreading the world over turn into volcanoes. Wind indicators in airports become symbols of migration. Death takes the form of a giant vulture.

Yet, amidst this climate of futility, there are images of “unity and connectivity” like the strips of cloth stretching from different directions tied into a tight knot, and the anthills and the Tower of Babel, which was constructed by a united human race speaking a single language, suggesting people coming together.

The Tower of Babel like his miner’s boots (shades of Vincent Van Gogh) and machines metamorphosed into animals and humans are all made of unfired clay. The anthills, which are being sprayed with insecticide, too, are “forms of unity and connectivity”. “Resistance and survival” in the face of adversity.

So if his work has grown out of his concern for the people back home, do they ever get to see it? He has shown his work in his home town and elsewhere, too, particularly through projection of the stop motion animation. Says Pachpute: “That’s when I feel so connected.”