Mason's home in Kalna was actually a snake pit 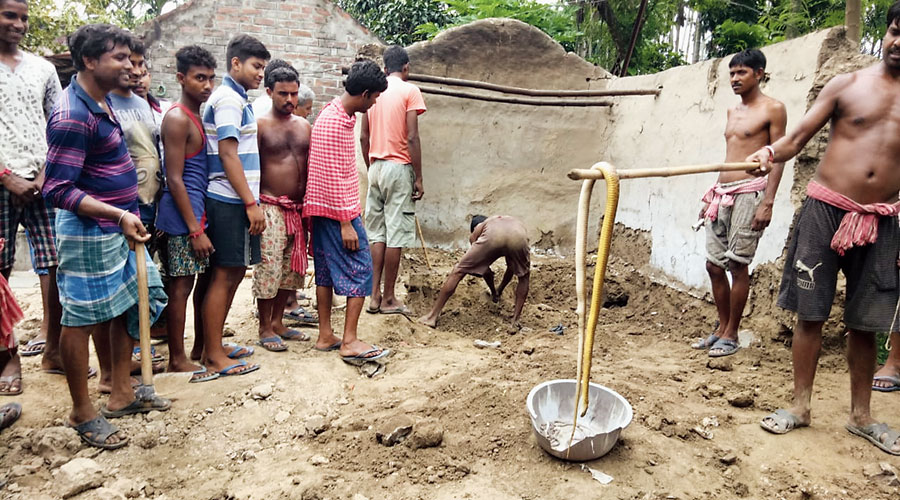 A mason from East Burdwan’s Kalna discovered at least 50 snakes, including deadly Indian cobras, between Wednesday and Thursday in his 40-year-old mud house on Thursday morning.

Haru Majhi, 40, a resident of Piyarinagar village in East Burdwan’s Kalna, demolished his home on Thursday.

The Majhi family’s terrifying ordeal started on Wednesday when his wife Tagori spotted a cobra in the kitchen.

“By Wednesday evening, we had found at least 12 snakes slithering down mud walls. We have three children and my elderly parents live with us. We decided to demolish the home for safety,” Haru said.

Early in the morning, when Haru decided to break down the walls, a greater shock awaited him. “Over three dozen snakes, mostly cobras, emerged,” Haru said.

Dinabandhu Biswas, a snake rescuer and member of the Wildlife Crime Control Bureau in Birbhum, said a mother cobra might live with as many as 35-37 baby snakes.

Haru added that he and fellow villagers were so scared and shocked over the number of snakes that they forgot to alert foresters or the police. “We were just terrified.”

Haru, Tagori and their children have now shifted to the one-room home that his father Rakhal received under a government scheme.

“It is better to live in one room than share space with poisonous snakes,” Tagori said. “Apart from the snakes, we also discovered 26 empty shells of snake eggs,” she added.

Haru’s mother, Kajoli Majhi, would sleep on a bed near the wall where most of the reptiles were found. She said on Thursday that she was in a state of shock.

“I cannot believe that I used to sleep for years in the room and near the wall from where most of the snakes were found,” said the elderly woman.

Villagers said they were surprised to see so many snakes inside a house, adding that it was a rare occurrence in their village.

“Snakes abound in rural areas but I have never seen them in such large numbers from one home. We are in shock. There were many holes in the mud house that gave safe shelter to the snakes,” said Sudarshan Kumar Dey, a neighbour.

Dinabandhu Biswas, a snake rescuer and member of the Wildlife Crime Control Bureau in Birbhum, said that a mother cobra might live with as many as 35-37 baby snakes in mud homes.

“If there are more female snakes, the number of snakes will multiply. Snakes usually take shelter in holes. The owner of a mud home should keep vigil on holes made by rats and plug them before monsoon or else snakes will take shelter.”

Baishakhi Saha, the local gram panchayat member, said the Majhi family’s panic on seeing such a large number of snakes was natural.

“However, it was unfortunate that he had to demolish the house as they are poor people,” she said.