The delay happened as the construction of a viaduct was stalled 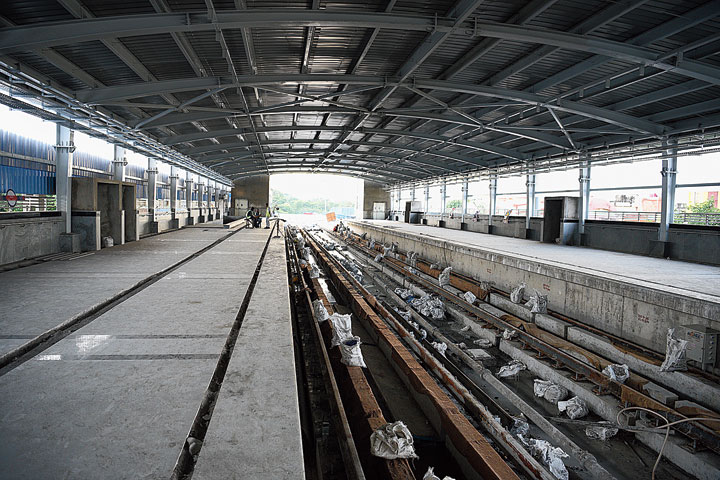 A new Metro line between Noapara and Dakshineswar that can ease the pressure on Tallah bridge is almost ready but it will not become operational before March next year despite railways and the state government pushing for an earlier commissioning.

The work for the 3.78km project is about 80 per cent complete but a delay of over a month last year has made it difficult to bring the deadline forward, said officials of Rail Vikas Nigam Ltd (RVNL), the implementing agency for the Noapara-Dakshineswar line.

The delay happened as the construction of a viaduct was stalled and there were problems to build tracks over a busy BT Road.

Thousands of commuters from the northern fringes of Calcutta, who now use the BT Road and so the Tallah bridge to travel to the heart of the city, will find it faster to use the new Metro link.

With the Tallah bridge closed to buses, they have to come to Noapara or take a bus to Dum Dum to take a Metro. But because of the diversion, the bus routes to Dum Dum from BT Road have become more congested.

“We have requested the general manager of Metro Railway and senior RVNL officials to commission the Noapara-Dakshineswar project as fast as possible given the condition of the Tallah bridge. But they are saying it would be difficult to complete the project and then the mandatory trials before March 2020,” said Narayan Swaroop Nigam, state transport secretary.

RVNL officials said the civil construction was almost complete barring a 180-metre stretch of viaduct beside the Dunlop bridge.

The laying of tracks and installing signalling and electrical systems have already started. Interior works of the stations is also going on, they said.

“We are trying to complete the civil construction work by November. We are hopeful that the project will be commissioned by March next year,” said Rajesh Prasad, executive director of RVNL in Calcutta.

RVNL officials said the work was delayed when dismantling of a 150m stretch of the Belghoria Expressway that was no longer in use, was stalled. Around 100m of the span had been razed when work had to be stopped in September 2018 for urgent repairs on a flyover in Dunlop 100m away.

The decision to carry out the repairs was taken after a public works department team, which was inspecting all flyovers and bridges following the collapse of the Majerhat bridge on September 4, detected some problems in its bearings.

“This deferred the completion of the project. Now we are trying to speed up the work but construction over the busy BT Road has to be done with caution. Also, the viaduct is being built parallel to Belghoria Expressway on one side and suburban railway tracks on the other. So there too, we have to work with more caution,” said a RVNL official.

“Since it’s a short stretch, it is unlikely there will be truncated services between Noapara and Dakshineswar. There are plans to operate trains every five minutes,” said a railway official.

He said with more rakes about to be inducted in the Metro fleet, it would be possible to run trains till Dakshineswar at five minutes frequency at least during peak hours.