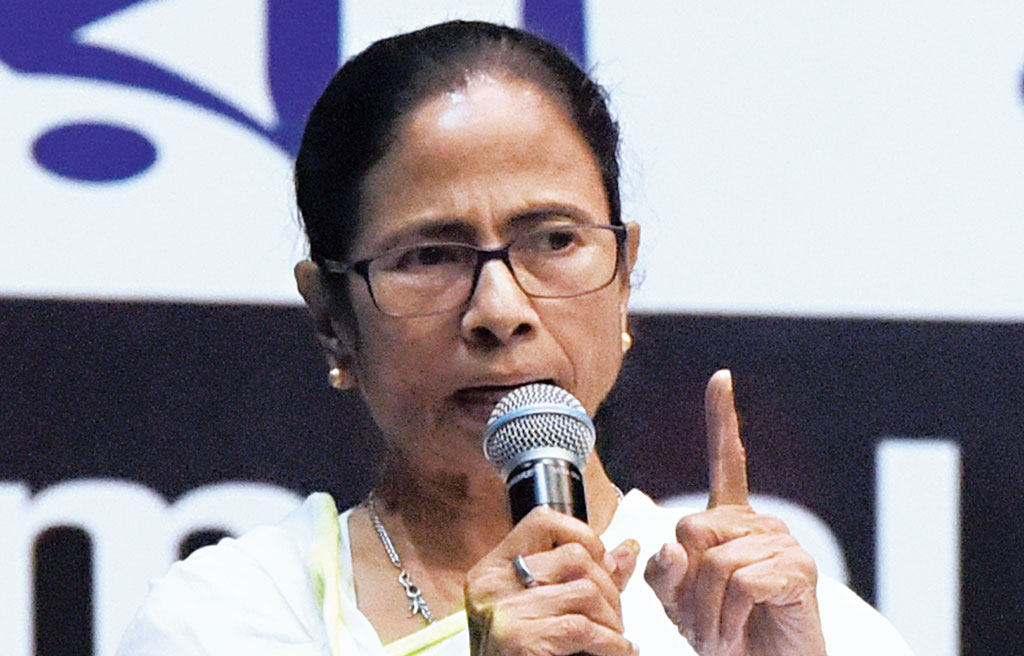 Chief minister Mamata Banerjee on Monday sought to address fatal panic over the National Register of Citizens (NRC), renewing her pledge to keep Bengal out of the exercise and offering people a tip to calm their fears over documents.

The chief minister told a convention of the Trinamul Congress’s labour arm that people should file FIRs in police stations stating that they have lost vital documents deemed necessary for inclusion in the NRC.

“If you have the FIRs, nothing can happen. Everybody knows Bengal experiences a lot of floods. Floods, natural disasters… documents get lost, nobody can do anything about it. Go to the nearest police station, file an FIR, relax. If you must, deal with this intelligently,” she added.

Mamata condoled the death of six people in Bengal that she attributed to fears over the possibility of an Assam-like NRC exercise in the state. She ruled out such a possibility and lambasted the BJP, which she held responsible for the panic.

The chief minister brought up the NRC issue to try and dispel fears of the exercise being replicated in Bengal, which the BJP has been vowing to do, should it come to power in the state.

“They need the state machinery to be able to conduct the NRC. I am here. As long as I am here, they are not getting access to it,” said Mamata.

“Total shame on the BJP for creating such panic over the NRC in Bengal. It has caused six deaths already. So unfortunate…. I have been saying this repeatedly. Why won’t you believe this? There will be no NRC in Bengal. I will never, ever allow it here,” the Trinamul Congress chief said at the Netaji Indoor Stadium event.

In the past week, at least six deaths — four of them over the past three days in North 24-Parganas alone — were reported across Bengal, which the families attributed to fears over the NRC.

BJP leaders have made repeated assertions about bringing Bengal under the NRC.

BJP chief Amit Shah, during his visit to Calcutta on October 1, is scheduled to address a seminar on the NRC, party state general-secretary Sayantan Basu said on Monday.

With over 11 lakh Hindus said to be part of the 19 lakh names excluded from the Assam NRC, apprehensions over the exercise no longer remain confined to border areas and people from the minority communities.

She was referring to the accord signed in 1985 between the Rajiv Gandhi government at the Centre and the All Assam Students’ Union, bringing to an end a six-year movement against alleged illegal immigrants from Bangladesh.

Trinamul sources said now that even Hindus have started fearing the NRC, Mamata had sensed an opportunity to nullify the Sangh parivar’s agenda by driving home the message that even the majority is not safe under the BJP regime.

“They only know how to polarise and divide the people, now they have added the NRC to this. They talk about championing the cause of Hindus, yet 12 out of the 19 lakh names excluded in Assam are of Hindus…. In reality, they are not there for anybody,” she said.

Mamata underscored the opposition to the NRC by NDA partners, such as Janata Dal United chief Nitish Kumar.

“If they (the BJP) want the NRC so badly, first let them go and conduct it in Tripura. Their own chief minister (Biplab Deb) will not make the cut,” she said.

BJP Bengal unit chief Dilip Ghosh, who has been asserting that “one crore non-Hindu infiltrators” would be made to leave through the NRC after his party comes to power in the state, accused Mamata of trying to mislead Hindus over the NRC.