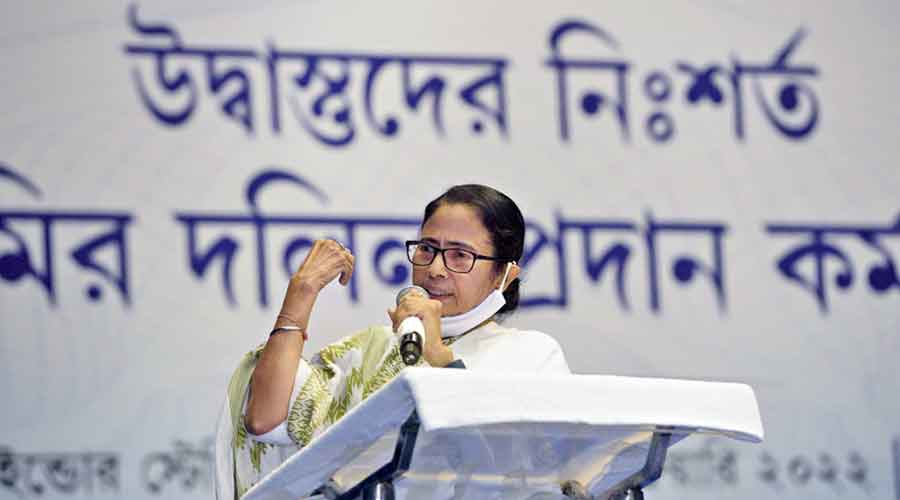 Mamata Banerjee on Thursday distributed freehold title deeds to over 2,000 residents of refugee colonies in Bengal at a government programme and used the occasion to mount a scathing offensive on the BJP-led central government for its alleged attempts at making countless people refugees through its contentious citizenship matrix.

The Bengal chief minister’s speech — some of it in Hindi, clearly aimed at a wider audience — was delivered on the day of the first phase of the Assembly elections in Uttar Pradesh.

“With these title deeds, you will have an address, finally…. Nobody did this for you through those 34 years (of the Left Front regime). Our government gave you this right… and the BJP is trying to snatch away these rights from the people, in the name of the NPR (the National Population Register) and the CAA (the am-ended citizenship law),” said the chief minister at the Netaji Indoor Stadium here.

She said her government had regularised 261 refugee colonies, set up on state government-owned land, and this would benefit 52,000 families across Bengal.

Sources said Mamata was tactically trying to woo the Matuas as well as those living in the refugee colonies through the programme with an eye on the general election of 2024.

“The BJP still has some support base in the refugee colonies and among the Matuas. The chief minister is trying to find some penetration among this section of people for the Lok Sabha polls,” said a source.

He said the Matuas, who hold the key to electoral success in at least two parliamentary constituencies in Bengal — Bongaon and Ranaghat — had not been happy with the BJP these days as the Centre had been delaying the implementation of the amended citizenship act.

“She is trying to utilise the dissatisfaction of the Matuas by giving pattas to the refugees, many of whom are members of the community. This will help her party in wooing the Matuas away from the BJP,” he added.

The chief minister did specifically mention that the Matuas would benefit from the initiative. “Nobody will be able to oust you from your land.... This will help the Matuas too,” she said.

Mamata also compared Bengal with the BJP-ruled UP to underscore how her government had been more humane than those in BJP-ruled states.

“The BJP-led Uttar Pradesh claims they have given 41 lakh dwelling units to the poor.… The state has a population of 24 crore. In Bengal, we have given 45 lakh units under Banglar Bari, although we have around 10.5 crore people here,” she said.

Mamata also addressed the issue of sticking to her policy against forceful land acquisition.

“Recently, some outfits have been trying to organise agitation, claiming the state government is trying to grab land at Deocha-Pachami for the coal mine project,” said an official.

Mamata explained the facilities that residents of the colonies would now get. “You will be able to sell your plots.... You will get loans, and most importantly you will get an address. Getting an address is really important,” she said.