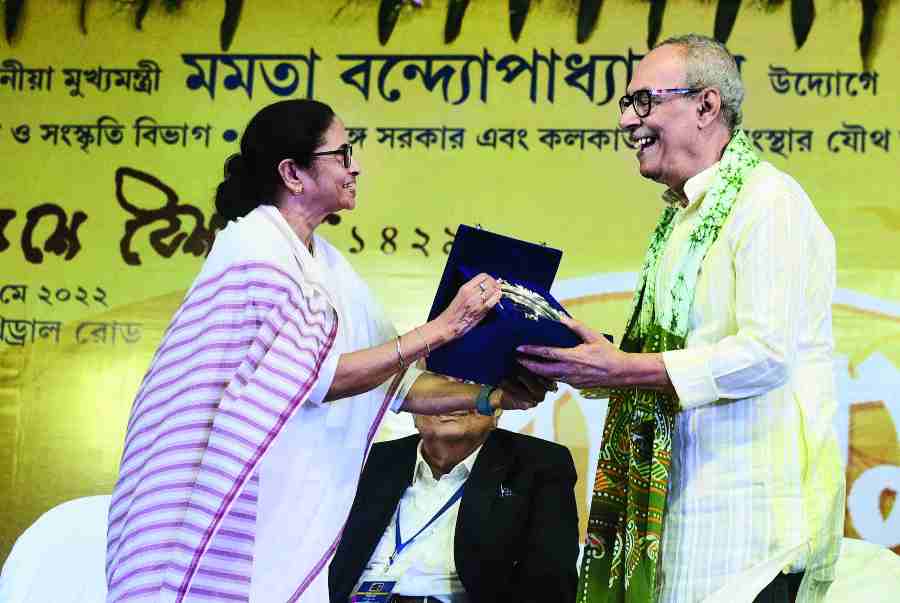 Mamata Banerjee used the occasion of the birth anniversary of Rabindranath Tagore on Monday to highlight the failure of the CBI in recovering the poet’s Nobel medallion that had been stolen from Visva-Bharati’s Rabindra Bhavana museum in 2004.

Her attack — coming at a time the central agency is probing a slew of cases in Bengal — was clearly aimed at the BJP, which according to many in Trinamul has made it a habit to seek CBI probes after any untoward incident in the state as part of its strategy to show the state police in poor light.

“I still feel sorry when I think that Tagore’s Nobel Prize is yet to be recovered even after so many years... It was an incident that happened during the time of the Left. The investigation was handed over to the CBI. The CBI has probably closed the case. I don’t know whether all the evidence is still intact... But it is a matter of disgrace for us, dishonour for us,” said Mamata at a government programme organised on the occasion of the Bard’s birth anniversary.

Tagore’s Nobel medal and several memorabilia were stolen from Visva-Bharati’s museum in Santiniketan in March 2004.

The case was immediately handed over to the CBI.

After an investigation lasting for over five years, the CBI finally in 2009 wrote to

the Visva-Bharati as well as the Bolpur court that they would temporarily close the case and will again reopen if the agency gets any further clues.

Mamata had earlier, in 2017 and 2019, said that the state agencies would probe the case if the CBI left it officially. In 2017, she announced this from Visva-Bharati while attending a programme and repeated the same point once again two years later. Sources said that the state police had even sent a proposal to the Centre seeking permission to start a probe in the Nobel theft case in 2019 but it was refused.

Mamata added that the works of Tagore were “in our hearts”.

Bengal, which is being used in the courts to demand CBI probes into incidents taking place in the Trinamul-ruled state.

like the Bogtui carnage or the gang-rape in Hanskhali. We will not let the BJP tarnish the image of Bengal government and its police when its

agency failed to crack the Nobel theft case, which has a sentimental connection with all Bengalis,” said a senior Trinamul leader in Calcutta.

During his two-day visit to Bengal, Union home minister Amit Shah had also raised the issue of how the courts were ordering CBI probes into most of the cases in Bengal.

A Trinamul insider said the party machinery is in the process of creating catchy slogans on the Nobel theft issue and the CBI's failure in cracking the case.

“Suney rakho CBI, Nobel padak ferat chai (hear us out CBI, we want the Nobel medallion back) is one of the slogans in this endeavour. We want to make the people of Bengal understand that the BJP’s demand for CBI probes is nothing but a political call,” said a Trinamul leader.

Not just the CBI's failure, the Trinamul ecosystem also highlighted the Centre’s apathy towards the Bard as Sukhendu Sekhar Roy, a national spokesperson of Trinamul and a Rajya Sabha member, said that the 161st birth anniversary event of Tagore at the Parliament had very few participants.

“It is extremely sad to see low attendance on such a special day! When Tagore’s birth anniversary was observed in the central hall of the Parliament, only three persons were present—the minister of state Pratima Bhowmik, myself Sukhendu Sekhar Roy and secretary general of Lok Sabha. No other member from any political party participated. It is really very shocking and painful,” said Roy.

BJP leaders in Bengal said that Trinamul can’t deflect attention from the state’s law and order by referring to the Nobel heist case.

“The point is that people of this state have lost faith in the law enforcing agencies in Bengal and this is why they are demanding probes by independent agencies…..The point raised by the chief minister regarding the Nobel prize is immaterial here,” said BJP spokesperson Shamik Bhattacharya.

Paschimbanga Bangla Academy on Monday conferred its special award to Mamata Banerjee for her book of poems, Kabita Bitan, and her relentless efforts to enrich Bengali literature.

The award was received by state education minister and chairman of the academy Bratya Basu.