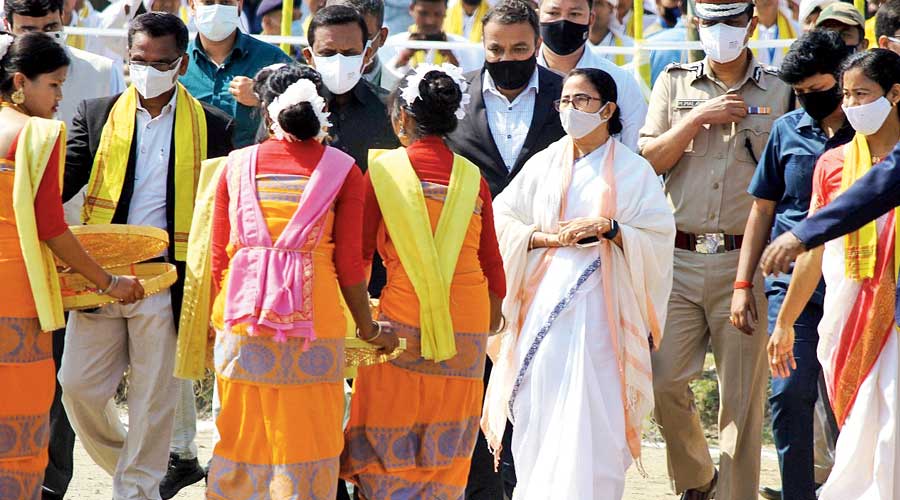 Mamata Banerjee went all out to woo the Rajbanshis — the most significant ethnic group in terms of electoral politics — on Wednesday as she addressed a one-lakh-plus gathering near here on the 512th birth anniversary of Chila Roy, an icon revered by the community.

Shukladhwaj, a member of the Cooch Behar royals, is known as Chila Roy and was the fiercest fighter of the family that had ruled the princely state till its merger with India in 1949.

The chief minister cut short her north Bengal trip and rushed back to Calcutta on Wednesday evening to take part in the funeral of singer Sandhya Mukherjee, but she made it a point to attend the programme, organised by the Ananta Roy (Maharaj) faction of the Greater Cooch Behar Peoples’ Association at Pushant Dabri in Cooch Behar 2 block. Pushant Dabri is around 15km from the district headquarters.

“Please have faith, please have trust... We have done a lot for the Rajbanshi community and will continue to work for them,” Mamata said in her brief address after she sat through a 20-minute cultural programme.

It was clear that she had come with the mission to charm the Rajbanshis, especially the Ananta faction. He had, till now, been rooting for the BJP. The support of the self-styled community leader, who is called Maharaj by his supporters, has been yielding rich political dividends for the BJP in north Bengal, where the party won 30 out of the 54 seats in the Assembly polls last year.

This is the first time that Mamata attended an event hosted by the Ananta faction of the GCPA. The other faction, headed by Bangshibadan Barman, has been with Trinamul for years.

Aware that a change in the community’s political preference would depend on meeting the demands linked to Rajbanshi identity, Mamata said: “Let me announce that the state government will spend Rs 18 lakh to install a 15ft-high statue of Chila Roy. Also, landscaping would be carried out in the adjoining area.”

The statue, Mamata said, will come up between the check-post at Baburhat and Jhinaidanga, located on the eastern outskirts of the town.

That Mamata tried to draw the support of Rajbanshis by stoking their sentiments with Chila Roy was evident when she announced construction of a community hall in his name in Cooch Behar 2 block for which the state would spend Rs 75 lakh.

A new bituminous road — around 2km- long — that was constructed ahead of her visit and connects the venue of Wednesday’s meeting with Baneswar, was named after the royal warrior. “The life and works of Panchanan Barma (a Rajbanshi social reformer) have been included in the school syllabus of our state. I would ask the education department to include Chila Roy’s life history in the syllabus in a similar manner,” said Mamata.

The chief minister used the occasion to address another major issue, the employment of the Rajbanshi youths.

She referred to Narayani Sena, as the followers of Ananta Roy call themselves, and said those youths would get a chance to avail themselves of state government jobs. There are over 700 such volunteers in the GCPA who move as an organised force, donning traditional white attires.

The royal troops of the erstwhile Cooch Behar state were called Narayani Sena.

“We have constituted a Narayani battalion in the state police. If you agree, these youths can be inducted into the state police force as civic volunteers, home guards and in other capacities according to the qualification, through a special drive,” Mamata said, addressing the GCPA leadership.

While Mamata tried her best to woo the Ananta Roy faction of the GCPA, a political analyst said winning them over would be easier said than done as Roy, who had been enjoying BJP patronage for around five years, was known for his hard bargaining skills.

The fact that Roy hasn’t fully committed to Mamata — despite inviting her personally to the programme — became clear within a few hours as he welcomed Nisith Pramanik, the BJP MP of Cooch Behar and the Union minister of state for home affairs and sports, to the same programme.

“He is trying his best to get a good deal from the BJP as well... For the time being, he is doing a balancing act and it remains to be seen which way he tilts in the coming days,” said a political observer.