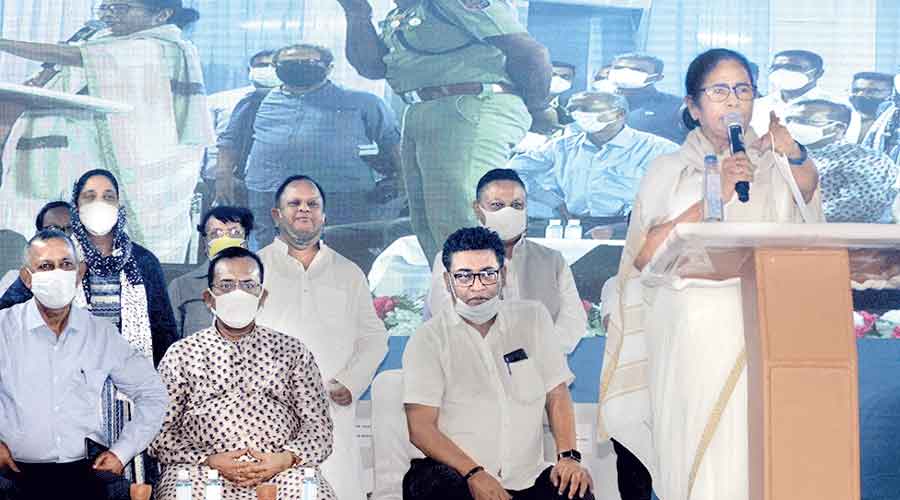 Mamata Banerjee landed at Bagdogra airport on the plains of Darjeeling district on Sunday afternoon but the rumbles were felt in the hills of Darjeeling.

This is because three major political forces in the hills; the Anit Thapa-headed Bharatiya Gorkha Prajatantrik Morcha (BGPM), the Bimal Gurung-led Gorkha Janmukti Morcha (GJM) and Binay Tamang, who plans to start his “third chapter” of his political career are all allies of Trinamul Congress but are intensely competing against each other to be the “closest” to the chief minister.

Amid the rivalry and the game of perception, Anit Thapa seems to be leading.

Only Thapa shared the dais at the chief minister’s function in Siliguri on Sunday afternoon.

The importance of Mamata’s invitation to Thapa for the Siliguri event could be gauged from the reactions in his party.

Pictures of Thapa at the event and also a 22-second video where Mamata addressed Thapa as our “bondhu (friend)” from Darjeeling were immediately and widely circulated by leaders of the BGPM.

Many believe that the perception of having the “blessings” of the state government has gained importance in the hills amid talks that elections to Gorkhaland Territorial Administration (GTA) and panchayats can be held immediately.

Thapa hands over an award at the same event.
Passang Yolmo

GTA elections are due since 2017. The last one-tier gram panchayat election in the hills was last held in 2000.

Thapa’s party leaders have also started creating a narrative that Mamata’s decision to hold the administrative meeting for Darjeeling and Kalimpong districts in Kurseong on October 26, is a further reinforcement of the state’s blessings to Thapa. Thapa hails from Kurseong.

In what many hill observers felt was a last-minute damage control measure, Thapa’s former leader Tamang issued a press release signed as “former GTA chairman” reminding all that an earlier administrative meeting had also been held at Kurseong in 2019.

Tamang also stated in his media statement that he would want to see Mamata Banerjee as the Prime Minister of India in 2024.

Asked if he was meeting Mamata, Tamang told this paper that nothing is confirmed.

The Bimal Gurung camp, however, was more candid. “We have sought an appointment to meet chief minister Mamata Banerjee but have not received any confirmation yet,” said Roshan Giri, the general secretary of GJM.

Bimal Gurung and Mamata Banerjee, despite being political allies now, have shared a blow-hot, blow-cold relationship in the past.

Even though Gurung decided to ally with Trinamul last year, ditching his decade-old ally BJP, there has been no public announcement of the two leaders meeting each other.

Rivals Thapa and Giri also hoped that elections either to GTA or two-tier panchayat elections will be held in Darjeeling soon.

According to a 1992 constitutional amendment, only a two-tier panchayat election (gram panchayat and panchayat samiti) can be held in the hills. There are no provisions for holding elections to the third tier, zilla parishad, unless the Constitution is amended again.

Even so, the elections to one tier, which is the gram panchayat, was last held in 2000.

Insiders maintain Thapa is planning on a rousing reception for Mamata when she ascends the hills on Tuesday.

Sources maintain that Thapa’s party is also looking at replacing office-bearers of Khas, Rai and minority development board. “The final decision, however, lies with the chief minister,” said a BGPM source.

The state government has formed 16 development boards for various hill communities. There are allegations of widespread corruption against certain boards.

Many in the hills are expecting the chief minister to take stock of the development surrounding the setting of Darjeeling Hills University, which has yet to make a headstart as a vice-chancellor to the university has not yet been appointed following difference of opinion between the state government and the governor on the issue.

The recent landslide and the administration’s promptness are also likely to be discussed in the administrative meeting. The district administration of Darjeeling and Kalimpong have been communicating to the media of the initiatives being taken to reopen NH-10 and other roads in the districts.

Political parties in the hills are also vying against each other in deploying earthmovers to clear roads, too.