Protesting students at the university welcome the chief minister’s comments 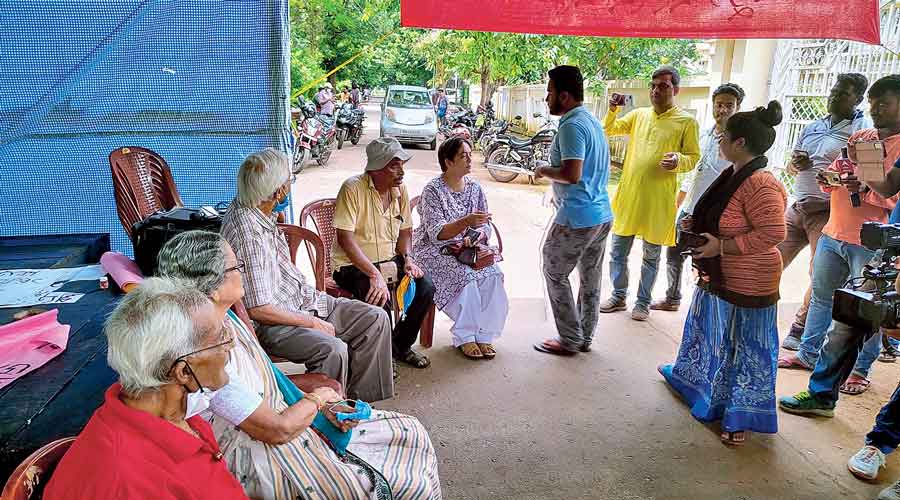 Mamata Banerjee on Thursday rued Visva-Bharati’s transition from a “place of pride” to an institution saddled with problems as the stalemate over student protests against alleged high-handed approach of vice-chancellor Bidyut Chakrabarty continued to persist at the varsity.

“Birbhum has its own legacy with Santiniketan and Visva-Bharati. Visva-Bharati was once a place of pride for us. But now, I am witnessing several problems there,” said the chief minister during a virtual felicitation of students who excelled in secondary and higher secondary examinations conducted by state boards.

Although Visva-Bharati is a central university, successive governments in Bengal have always extended support to the varsity set up by Rabindranath Tagore.

Mamata, who had spent a lot of time at her maternal uncle’s home in Birbhum in her childhood, has a special connection with the varsity because of her interest in art and culture. Within hours of Mamata expressing her concerns about the state of affairs at Visva-Bharati, some protesting students and teachers said they wanted her intervention to resolve the impasse, for which they blamed VC Chakrabarty’s attempts at saffronising the institution that has been an abode of Tagore’s inclusive principles.

“We know our chief minister has respect for Tagore and love for the students and her comments prove her concerns about what’s happening here…. We want her intervention to protect the institution and save us from the wrath of the VC, who has targeted us because of our protests against his saffronisation agenda,” said Falguni Pan, one of the three students whom the varsity had rusticated last week.

Since August 27, a section of students has been staging a ghearo of the VC’s official residence, demanding revocation of rustication of Pan, Somnath Sow and Rupa Chakraborty. The protesters have put up a tent in front of the VC’s home.

The varsity authorities had on Wednesday moved a petition before Calcutta High Court seeking judicial intervention in the ongoing stalemate over the agitation by a section of students and teachers. The petition which alleged that the agitators had the active support of “outsiders” demanded action against the protesters by the state government.

The petition is likely to be heard by the court of Justice Rajasekhar Mantha on Friday. Several students on the campus said the chief minister’s comments a day ahead of the hearing was reassuring for them as it meant that the state government would stand by the agitators.

Not just from the chief minister, the student community on Thursday got support from a group of elderly residents of Santiniketan also. The senior citizens met the protesters and promised their support in the battle against the “tyrannical rule” of VC Chakrabarty.

“The students are protesting with proper demand. We can’t accept their rustication for three years,” said Subir Banerjee, an old-timer.

Shanto Bhanu Sen, a cousin of Amartya Sen, also extended his support for the students before recalling how the VC had tried to insult the Nobel laureate economist.

“The present VC and his administration even did not spare someone like Amartya Sen and accused him of illegally holding varsity land.… It is not only the students, but anyone protesting against the VC’s wrong-doings is coming under attack. This approach of the authorities is very sad,” said Shanto Bhanu Sen.

On Thursday evening, tempers ran high outside the VC’s home when the students prevented two doctors (from the varsity’s Pearson Memorial Hospital) and a few staff from entering his residence.

“We wanted to send our two representatives with the doctors to see whether the VC is actually ill. We can’t take any chance as there are attempts to show us in poor light.… We would write to police and the state government to conduct a health check up of the VC by doctors from government hospitals,” said Somnath Sow, one of the rusticated students.

The doctors returned without examining Chakrabarty.

In the evening, a team of doctors with Bolpur subdivisional police officer Abhishek Ray reached the residence of the VC to know if he needed any medical support.

The police said they had called the VC but a woman who identified herself as the daughter of Chakrabarty said he didn’t need any medical assistance right now. “We have informed her that the VC may call the police anytime if he needs medical support,” said a senior police officer.