Didi bullish on job creation and industrialisation in Bengal 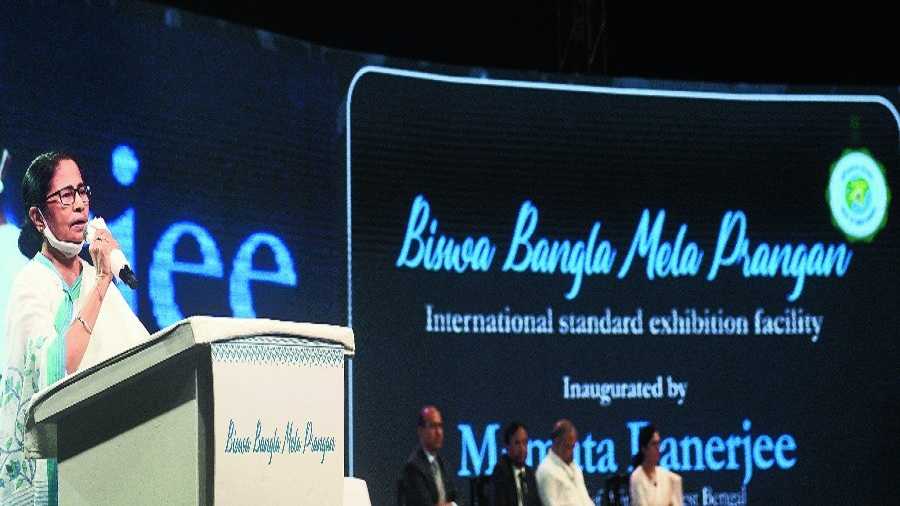 Mamata Banerjee during the inauguration of the Biswa Bangla Mela Prangan in Calcutta on Monday.
Telegraph photo
Pranesh Sarkar   |   Calcutta   |   Published 12.04.22, 02:33 AM

Mamata Banerjee on Monday inaugurated the Biswa Bangla Mela Prangan — a permanent exhibition centre — on the premises of erstwhile Milan Mela Prangan in Calcutta, claiming the new facility could draw business worth Rs 22,000 crore to the state and generate about 1 lakh employment opportunities.

Construction of the new centre spread across 22.35 acres had started almost three years ago and it was completed within the stipulated time-frame despite the Covid-19 pandemic.

Although the theme of the programme was about the new permanent exhibition venue, in her 43-minute speech, Mamata raised several local, national and international issues and criticised her political opponents.

The Telegraph takes a closer look at some of the points in Mamata’s speech.

Industrialisation: The chief minister said the government would organise the Bengal Global Business Summit (BGBS) on April 20 and 21 to draw investment to the state as her administration was laying stress on industrialisation and employment creation.

“We could not organise the BGBS in the past two years because of the pandemic. So far I know, 14 countries are participating in this year’s BGBS. I feel that Bengal is the gateway of industries,” said Mamata.

The chief minister pointed out that the state was working on several large projects, including the proposed coal mine at Deocha-Panchami in Birbhum district and the deep sea port at Tajpur in East Midnapore.

Economy and Sri Lanka: Mamata expressed concern over the economic condition of the country saying the effect of the economic disaster in Sri Lanka could leave an impact in India.

“The Reserve Bank of India is also worried about the country’s economy. Don’t you think what is happening in Sri Lanka would not have an effect here?” the chief minister said.

Then, she stressed that the policies of the BJP-led Centre were causing large-scale disruptions for Indian industry and this approach could spell disaster. “I condemn the policy to isolate industrialists and disturb them. It is not good for economic health,” said the chief minister.

The chief minister said if the industrialists fly away from the country, then industrialisation would suffer.

Attacking the BJP: The chief minister criticised the BJP for using agencies like the CBI and the ED to harass the Trinamul.

Without taking the name of the BJP, the chief minister said that if one misuses its power, people don’t forgive for long.

The chief minister explained why the BJP was trying to disturb the Trinamul-led state government.

Attacking the CPM: The chief minister criticised the CPM for destroying the work culture in the state and she pointed out that the party is still carrying with its policy that hurts the work culture.

“They call four strikes in a year. We have not allowed them to make any of the strikes successful. We support the issues but we don’t support strikes,” said Mamata.

The chief minister also wondered why the CPM was silent on the Russian invasion of Ukraine.

“I have seen in my childhood that the party used to hold rallies supporting Vietnam. But now, the party does not do anything even when people are being killed in Ukraine,” said the chief minister.

Sources in the administration said Mamata was furious at the CPM as it was regularly holding meetings and rallies against the state government after incidents like the Bogtui massacre and the unnatural death of Anish Khan.

“The chief minister feels that the incidents happened and her government has taken proper steps. This should be appreciated, she feels. As the CPM is holding rallies to protest such incidents, the chief minister was really angry with the party,” said a bureaucrat.