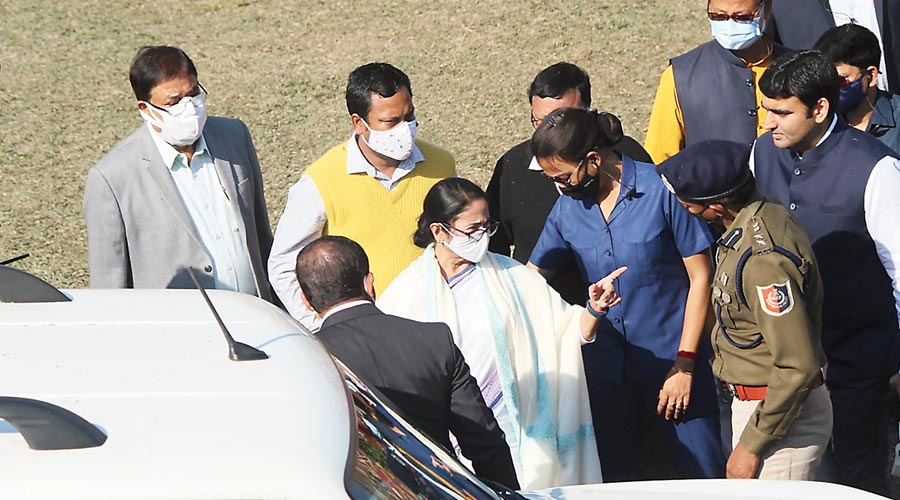 Mamata Banerjee on Tuesday chaired a meeting of the Tribal Advisory Council (TAC) and announced several initiatives for Adivasis — around 6 per cent of Bengal’s population — as part of a bid to woo them ahead of the 2023 panchayat polls and the 2024 Lok Sabha polls.

“We have decided to build 20 lakh houses for Scheduled Castes and Scheduled Tribes of the state in the next five years. All earthen huts would be replaced with houses. Also, 500 Ol Chiki-medium schools would be opened in another five years and 1,500 para-teachers would be recruited into these institutions,” Mamata said at the meeting.

She added that another 100 schools in Nepali, Hindi, Urdu, Kamtapuri and Kurmali mediums would be set up across Bengal while another 100 English-medium schools will be built for SC, ST students and those from economically weaker sections. Some announcements she made on Tuesday were part of budget proposals, but the fact that she said them again, a source said, meant the government was committing itself to the schemes starting this fiscal year.

The stress on schemes for tribal communities was clearly aimed at wooing them as the last few years have seen a rise in support for the BJP among these communities. In north Bengal, the ST communities form a considerable chunk of the vote bank after the Rajbanshis, especially in the tea belt. “Of 54 Assembly seats of the region, support of tribal people decides the results of around 12. In previous Lok Sabha and Assembly polls, most in north Bengal had voted for the BJP ,” said a political analyst.

On Tuesday, Mamata announced that the government would host a tribal convention, a first-of-its-kind initiative in the state, at the Netaji Indoor Stadium in Calcutta.

“We have finished all the work (that had been) taken up for the tribal community of the state. The tribal advisory council is working for them. We have drawn up some new plans and those would be taken up in due course,” said Mamata, while speaking to newspersons after the meeting.

An important highlight of the meeting was the presence of BJP MP of Malda (north) Khagen Murmu and former MP Dasrath Tirkey (also a BJP leader), who are members of the council, which meant that the chief minister was keen on taking the community leaders from Opposition parties in matters related to tribals.

A source at the meeting said she inquired about Manoj Tigga, the BJP MLA of Madarihat, who is also a member, but couldn't attend the meeting for “personal reasons”.

Later in the afternoon, she took a chopper to Cooch Behar. She landed at the helipad on the ABN Seal College campus of the town and headed for the Circuit House.

After her arrival, Bangshibadan Barman, who heads a faction of the Greater Cooch Behar Peoples’ Association (GCPA), went and met her.

“We will observe the birth anniversary of Chila Roy at Rashmela Ground (in Cooch Behar town) tomorrow (Wednesday). We requested her to attend the event but owing to paucity of time, she will send (state minister) Indranil Sen,” said Barman.

When told Mamata will attend a similar event in Cooch Behar-II block hosted by another faction of the GCPA led by Ananta Maharaj who is known to have links with the BJP, Barman said: “The chief minister knows well with whom he (Ananta) has connections. If she has decided to attend the event, it must be for some good reason.”