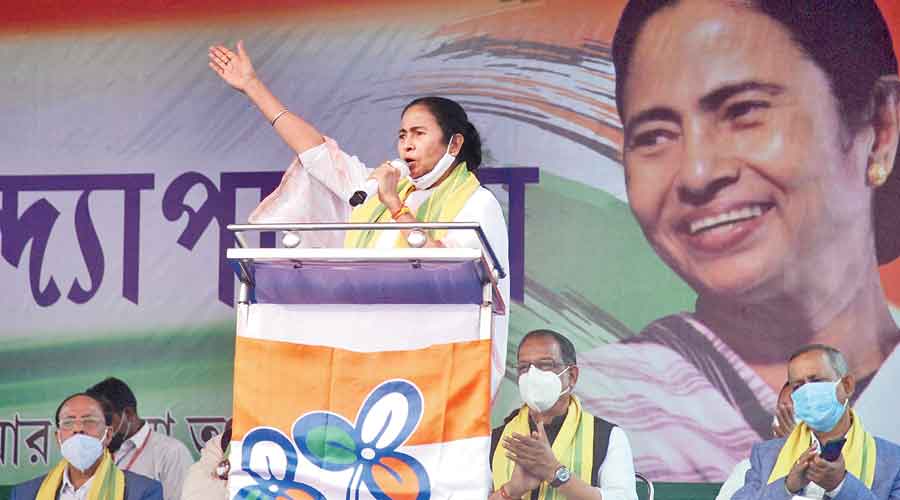 Chief minister Mamata Banerjee at the public meeting at ABPC Ground in Jalpaiguri on Tuesday
Biplab Basak
Our Correspondent   |   Jalpaiguri   |   Published 16.12.20, 01:12 AM

Chief minister and Trinamul supremo Mamata Banerjee on Tuesday told Bengal’s Gorkha population that only her party could come up with a “permanent political solution” for the hills, a term that her political adversary BJP had used before the 2019 Lok Sabha polls in response to the Gorkhaland demand.

Mamata, while speaking to a gathering of around 15,000 at the ABPC Ground here, slammed the BJP for “cheating” hill residents by promising a separate state of Gorkhaland.

“The BJP drew support from the hills time and again by promising Gorkhaland but eventually, it turned out to be a hollow promise. It is only us (Trinamul) who can bring a permanent political solution for the hills. I thank my brothers and sisters in the hills as they have finally realised that the BJP has duped them again and again over these years. We want peace to prevail in the hills and in the Dooars,” she said.

Mamata’s use of “permanent political solution”, a phrase the BJP used in its election manifesto last year, is significant, said a political observer. “We are committed to work towards finding a permanent political solution to the issue of Darjeeling Hills, Siliguri, Terai and Dooars region,” BJP’s manifesto had said. The 2019 election results proved that the BJP had indeed made deep inroads in the hills as in the entire north Bengal as the party won seven out of its eight Lok Sabha seats.

The political landscape in the hills changed significantly since May 2019, with long-time BJP ally Gorkha Janmukti Morcha leader Bimal Gurung dumping the party for Trinamul camp in October 2020.

A political analyst said Mamata’s speech on Tuesday was a clear indication that she was referring to a permanent political solution as part of her attempt to woo the Gorkha population, who play a decisive factor in five to six Assembly seats.

Mamata tried to explain how her approach was different from that of the BJP.

“We did not win (here) in the Lok Sabha polls, but we carried out our development (work). The BJP on the other hand did not do anything for the region. They promised to acquire closed tea estates... nothing happened. On the other hand, we took up a series of initiatives for people of this region, including the tribals and Rajbanshis,” she said, speaking on the housing scheme for tea workers, jobs for former militants and cultural board and language academies for the Rajbanshis.

Referring to the BJP, she said: “I am usually a peace-loving person but if I face any attack, I will retaliate in such a manner that it would be tough for you to counter. BJP is trying to foment tension among communities,” said Mamata.

Binay Tamang and Anit Thapa, the president and general secretary of one of the faction of the Morcha, headed for Calcutta on Tuesday on an “emergent assignment”, Keshav Raj Pokhrel, the faction’s spokesperson said. The trip is ahead of December 20 when Bimal Gurung, who heads the rival faction, will hold a public meeting in Darjeeling.