Thousands of labourers are trafficked out of India every day with promises of more money and a better life. But the reality is far from it 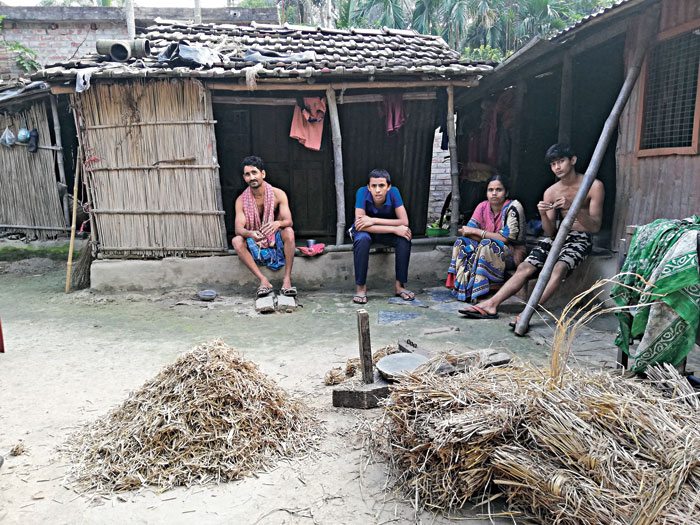 One might ask what stopped these people from returning home pronto once they discovered the reality. Truth is they were actually like slaves, bereft of any kind of agency or avenue of escape
Moumita Chaudhuri
Moumita Chaudhuri   |     |   Published 02.11.19, 08:31 PM

Time: 6 in the morning. Place: office of the National Anti-Trafficking Committee (NATC) in south Calcutta. The NATC is a non-government organisation. There are seven men sitting around a square table. They have landed hours ago from Kuala Lumpur, where they were working as labourers at a construction site and are now waiting to record their statements. Thereafter, they will head for their village in Ranaghat in Nadia district.

Prosenjit Paik, Shahjahan Mondal and Biplab Mistri are among the returning labourers. Each of them looks equally emaciated. Their eyes are red from many a sleepless night or from crying. Shahjahan, who is in his early twenties, appears nervous and stammers. Biplab breaks into tears without provocation. Prosenjit seems very angry.

It is Prosenjit who narrates how he and his companions were offered a job with Sky Master Construction Company, a Malaysian firm. The contract prepared on a Rs 10 stamp paper clearly said he would be paid 50 Malaysian ringgits or Rs 850 (1 ringgit equals Rs 17.01) per day as he had prior experience; novices would get 45 ringgits (Rs 766) per day.

But things were not as they sounded. “The moment we landed in Kuala Lumpur, our passports were taken away,” Prosenjit tells The Telegraph. When they reached the appointed lodgings, they were shocked. Shahjahan says, “A hall had been divided into cells. There were 35 of us in it. There was no provision for cooking.” The first day they went without food.

This is not the story of Prosenjit, Shahjahan or Biplab alone. It is the reality of thousands of others who are trafficked out of India every day. Sheikh Jinnar Ali, the national chairman of NATC, tells The Telegraph about the Calcutta-based “agent”, Kabir Hossain, who sold 600 men from different parts of India to a firm in Malaysia. Last week, 21 goldsmiths have been rescued from Jeddah. He says, “According to our investigation about a lakh-and-a-half of our people are still stuck in several countries — The United Arab Emirates, Qatar, Quwait, Tanzania, Iran, Indonesia, Malaysia, Saudi Arabia. Some have recently been sold to an agent in Afghanistan. We are trying to locate them.”

According to Ali, India ranks fourth in human trafficking in the world and Bengal ranks first in the country. “The reason is that the state has almost no economic development and not enough employment opportunities,” he says. He tells the story of one Sanjay Mallick from Barida village in the North 24-Parganas.

Best bait: Hanskhali and Dhantala villages witness an exodus of men like Rafiqul Tafadar to Malaysia, the UAE and Tanzania, notwithstanding their traumatic experiences
Moumita Chaudhuri

Mallick returned from Tanzania a few months before Prosenjit. In Barida, the 28-year-old worked sometimes as a farmhand and at other times as a daily wager. So when he was offered a job in a distant land that would pay him thrice of what he was making at home, he readily agreed.

Ali explains how labour trafficking happens. Middleman or agent meets Person A, who is unemployed or looking for better employment opportunities, and sells a dream. Agent arranges a single journey tourist visa for a fee — anything between Rs 1-2 lakh.

Says Ali, “What they actually do is sell these people for Rs 5-10 lakh each to agents in the country they are migrating to. It is the second agent who then assigns them work.”

But for Mallick, Prosenjit and their ilk, there is no happily-ever-after. Prosenjit and his mates were assigned work the day after their arrival in Malaysia. He says, “I was employed as a labourer and not as an expert as was mentioned in my contract.” Another notorious agent Srimanta Biswas is still behind bars.

Other contractual clauses too were flouted. For instance, the offer letter stated that a medical test would be conducted before the men got on the job. A fortnight went by and nothing happened. In the meantime, Biplab came down with fever. When the other men created a ruckus on his behalf for medical attention, they were asked to pay 500 ringgits (Rs 8,505). “How could we? We did not have a paisa on us,” says Prosenjit, throwing up his hands. They called up their Indian agent, Israfil, a relation of Kabir Hossain who had processed their papers. “He abused us and did not offer any solution,” he adds. Kabir was later arrested in connection with this case; he is now out on bail.

Prosenjit got his first salary after 56 days of work. And that’s how it was — late payments — throughout their nine-month stay. He claims the labourers were made to work for 10 hours or more and were not paid overtime or double payment for the working Sundays, as stated in the contract. “It was all a big fat lie,” he says, spitting out the words.

The disillusionment, however, did not end with a broken contract. That was the beginning. Every returning labourer this correspondent spoke to said they were ill-treated. Over phone from Barida, Mallick says, “Our supervisors were Chinese and they did not allow us any rest. If we took a minute’s rest or sat down to eat, they hit us with rods or helmets. We carried on our backs, slabs weighing at least 60 kilos. There were cranes, yet they would make the Indian labourers do it, as if they had something against Indians.” In one such incident, when Mallick sustained a serious nerve injury, he was promptly given the sack.

Biplab was tortured. He says, “They’d take off our helmets and hit us on the head with them. For every minute of rest, they would deduct 10 minutes from our work time and cut pay accordingly. The Chinese with us were much better off. They had better accommodation too.”

One might ask what stopped these people from returning home pronto once they discovered the reality. Truth is they were actually like slaves, bereft of any kind of agency or avenue of escape. But first, they could not think of returning because the stakes were too high — they had already risked too much.

Dhantala village is in Ranaghat subdivision in Bengal’s Nadia district. It is late afternoon and a seven-year-old girl is having the time of her life on a rickety swing. Her mother is not as carefree; she is wondering what to cook for lunch as there is no money at home to buy even the basic provisions. The little girl’s father, Rafiqul Tafadar, has not been able to find work in the fields.

Rafiqul had gone to Dubai a couple of months ago to work with Nassar Al Refaee Trading Company, a fruit packaging firm. He had earlier been to Iran on a contractual job. When he came back, he had made enough money to construct a pucca house. But the experience this time was different.

Rafiqul’s story has echoes of Mallick’s account and Biplab’s. Add to that his own debt of over Rs 1.5 lakh that he paid the agent after taking a personal loan from the mahajan and which he has no means of repaying, not even the interest of Rs 4,000 accruing every month.

Amirul Mondal is the founder member of Suraksha Mancha, a committee that has been formed by village elders in the Ranaghat area to raise awareness about the seamy side of these jobs abroad. Says Amirul, “Most of the members of the committee were at one point of the time or the other a victim of labour trafficking.”

He says he realised the need for such a platform when his son, Shamimul, returned from Dubai and narrated his experience. To date, Amirul blames himself for his son’s suffering. He says, “Another labourer, Manirul, who had reached Dubai much before my son even got his visa, had warned me. He said it was trap.” Manirul Mondal had spoken about how they were herded like cattle and treated even worse. About how they had to take turns to sleep for lack of space. How 50 people shared one bathroom. How their passports and visas were seized upon arrival. “But I didn’t listen,” says Amirul.

But he didn’t disregard these warnings for no reason. At the root of it all, there was a yearning for a little more money, a somewhat better life. The principal source of income in this part of the state is agriculture. With time, income from agriculture has suffered. Moreover, there are very few people who have their own land and hence have to work as farm labourers. “The wages currently stand at Rs 250 a day,” says Amirul. Even those who have land do not earn well as they have to employ farm-hands. And finally, though the state government claims to have the 100-day work scheme in place, the reality is otherwise.

The Trinamul MLA from Gopalnagar, Bongaon Vidhan Sabha, Biswajit Das, puts the blame squarely on new-age aspirations. He says, “Human trafficking happens because young people are lured by high pay packages. We have tried to solve the issues of employment by giving people jobs as civic volunteers, but they are not happy with little anymore.” Amirul had earlier spoken about a neighbour who purchased a mobile phone for Rs 70,000 after a stint in Dubai.

Das points out that working abroad is also considered fashionable. He says, “The local administration is trying to raise awareness. I am personally keeping vigil on advertisements and handbills circulated in the area. The police, too, conduct random raids on the offices of agents to check their documents and if anything is amiss, they’re put behind bars.”

Ali, however, does not believe that enough is being done to stop trafficking. He says, “The police do not entertain complaints, the human trafficking cell in Bengal does not act all that promptly, and there is also the issue of requisite security for the rescued labourers and the NATC officials.”

Alert on trafficking from West Bengal