Migrants are reluctant to leave home amid pandemic 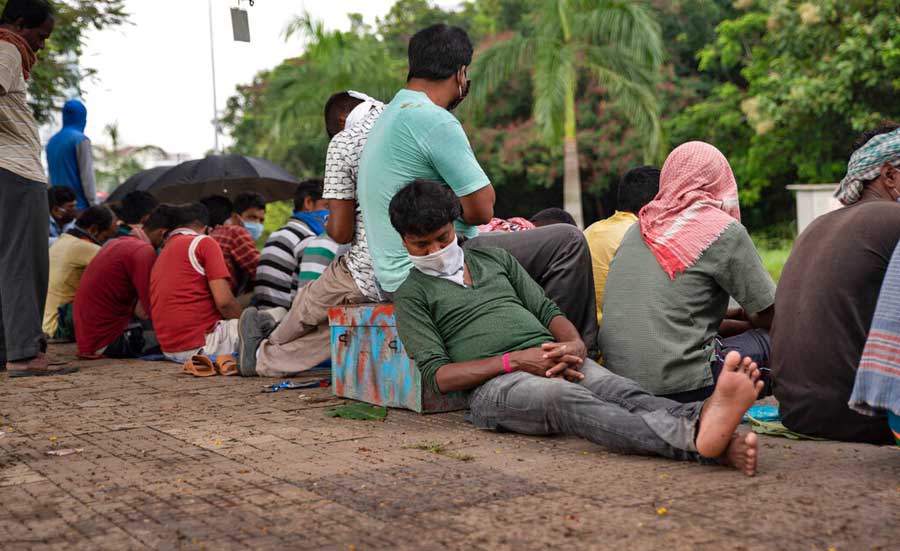 The blisters of the lockdown are still raw.

The head hunters of one of the largest private engineering firms in India have failed to source even half the labour requirement from Purulia after a three-week effort.

The uncommon experience underscores how the ill-conceived Covid lockdown — announced by the Prime Minister with a four-hour notice at night — and its harrowing fallout are still preying on the minds of some prospective migrant labourers and have cast a shadow on the flow of workforce in a labour-surplus economy like India.

“We contacted various labour organising agencies in Purulia, where we never faced any trouble before in sourcing labourers. But for the past three weeks, we have not been able to meet even half the labour demand for our projects,” said an official from the human resource wing of the company on the condition of anonymity.

He said the company had suffered a loss of Rs 2 lakh recently as an air-conditioned bus it had sent to Purulia to ferry 35-odd workers to a project site in Maharashtra had to return empty. The workers declined to board the bus, changing their minds at the last moment.

The workers had been offered a monthly pay of Rs 20,000 and company-provided shelter and food, the HR official said.

“Six months ago, this situation would have been unimaginable,” the official said, referring to the unexpected shift in the labour market where, all of a sudden, supply has fallen short of the demand.

The balance in India’s market for semi-skilled or unskilled workers had always been tilted in favour of the employers because of the labourers’ poor bargaining power. The labour-surplus economy was characterised by large-scale migrations of workers from rural areas to urban centres.

The Purulia development does not appear an isolated one.

Sources said they had come across similar reluctance among the workforce in some other parts of Bengal as well as in neighbouring Bihar, Jharkhand and Odisha — key suppliers of labour to western and southern India.

District officials in Purulia said this week that in anticipation of Unlock 1, they had begun compiling a database of the migrant workers who had returned during the nationwide lockdown, in order to match them with prospective employers and ensure livelihood for them.

After the compilation, the officials had launched a website in June so that companies could make use of the data and take labour-sourcing decisions.

“The company in question used our website in late June, asking for 1,500 workers — 900 masons, 200 fitters, 200 welders and 200 carpenters. But we were able to enlist barely 700 from a district that had seen at least 40,000 youths return during the lockdown,” said district magistrate Rahul Majumdar.

He said the rest were unwilling to leave the villages.

“They all said they would rather work in low-pay rural scheme jobs than go through the harassment they had faced while navigating the closing and reopening of the economy…. That’s why we are trying to help these people in getting employment in various government-run schemes in the state,” he said.

Labour agencies, which supply labourers to project sites across the country, confirmed the trend. “We are finding it difficult to enlist youths for the large-scale infrastructure projects outside the state…. They seem to be scared because of the ordeal they faced when the lockdown was announced,” a labour contractor said.

The labourers agree. “I don’t care about my income right now. Nor do the thousands of other youths like me. Safety and proximity to home are more important, like they are for everyone. Until the virus dies out, we will not be the cogs of an unreasonable machine,” Sambhu Mudi said.

A migrant labourer from Arsha village in Purulia, Mudi was able to make it home from Maharashtra only in mid-June after weeks of attempts yielded him a ride on a private truck plying materials. While Mudi considers himself “lucky to still be alive and healthy”, he is unwilling to take a gamble on what he termed “the new Covid economy”.

Industry insiders and economists said the trend may hurt industrial output in the near future.

“This is a very unconventional picture because it is hard to conceive a scenario where the labourers would refuse to go to their workplaces,” said Saswati Chaudhuri, associate professor of economics at St Xavier’s College, Calcutta.

She said the supply shock in the labour market might result in a disproportionate reduction in aggregate demand, because lower earnings by the labourers would result in lower spending that, in turn, would further squeeze demand and hence industrial output.