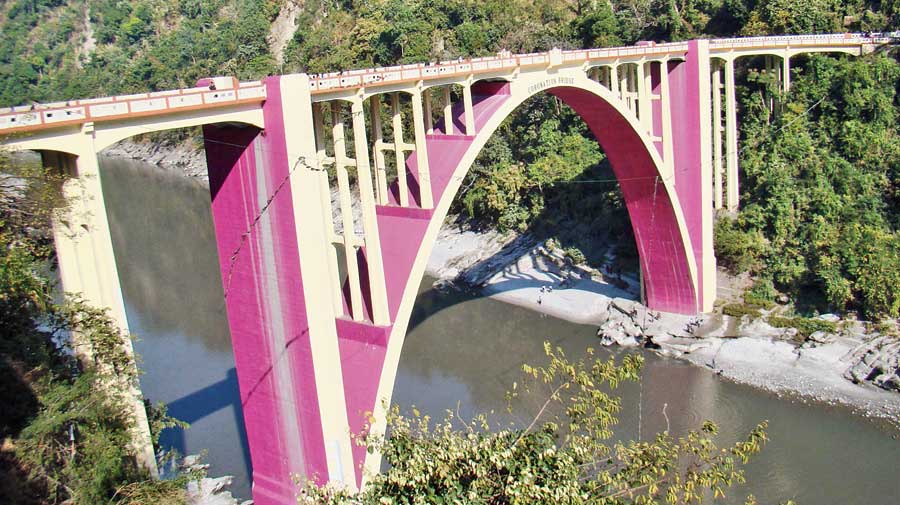 The Coronation Bridge at Sevoke over the Teesta, that connects the Dooars with Siliguri
Telegraph picture
Bireswar Banerjee   |   Siliguri   |   Published 11.09.20, 03:35 AM

The decision by the state PWD to bar vehicles weighing 10 tonnes or more over the Coronation Bridge in Sevoke along NH 31C has prompted residents of the Dooars to demand a second bridge on the Teesta in the river’s downstream near Sevoke Bazaar, some 20km from here.

The Coronation Bridge was built in 1941 to mark the coronation of King George V. In 2011, cracks spotted on the bridge prompted the PWD to carry out repairs.

A tourist attraction, the giant structure can be conserved only by reducing traffic load, say many.

On August 19 this year, the state PWD (NH division) ordered that vehicles weighing 10 tonnes and above could not ply on the bridge. “Some repair work has to be done on bridge but because of monsoon they could not be carried out. The restriction is imposed to avoid any detrimental effect on the structure,” said a PWD source.

But with this curb, goods vehicles bound for the Dooars from Siliguri or vice-versa have to detour along NH27, that is, skirt Jalpaiguri to cross the Teesta.

Apart from the Coronation Bridge, there are two more ways to cross the Teesta. One is a bridge at the Teesta Barrage in Gajoldoba that is not suitable for heavy vehicular movement and the other is the Teesta bridge (there are two parallel bridges now) on Jalpaiguri outskirts. In fact, as of now this pair of bridges — each used for one-way traffic — is the only means for heavy vehicles to cross the river and head for the Dooars and the Northeast.

“This means more time as more distance has to be covered. Also, transport cost rises. From the Dooars, hundreds of vehicles used to ferry teas from estates to Siliguri warehouses via Sevoke. But now, these vehicles have to take the detour like other goods vehicles. People are facing inconvenience in the Dooars. We have decided to launch a movement soon, demanding a second bridge over the Teesta in an alignment like the Coronation Bridge so that direct connectivity between the Dooars and Siliguri is maintained,” said Chandan Roy, founder-secretary, the Dooars Forum for Social Reform, an apolitical outfit.

Earlier, a plan was drawn up by the state and the Centre to build another bridge over the Teesta, as has been mentioned by the Dooars residents. The project, however, has not started even today.

This July, in reply to a letter of MP of Jalpaiguri Jayanta Roy, Union minister for road transport and highways Nitin Gadkari had said that the state PWD was making a detailed project report for building another bridge over Teesta. Gadkari also said that for the project some 20.69 hectares had to be taken from the railways and the process had been initiated.

“We want both the governments (Centre and state) to take up the project on priority basis. The bridge is also strategically important,” said Roy.

The Forum, he said, has lined up certain activities to mount pressure on the state and central governments.

On September 24, they will stage symbolic road blockades in areas such as Malbazar, Odlabari, Chalsa and Nagrakata in the Dooars. “Later this month, we will also go to the office of the executive engineer of the division of state PWD concerned and submit a memorandum to him,” he added.