Lessons in folk art and social harmony in Calcutta 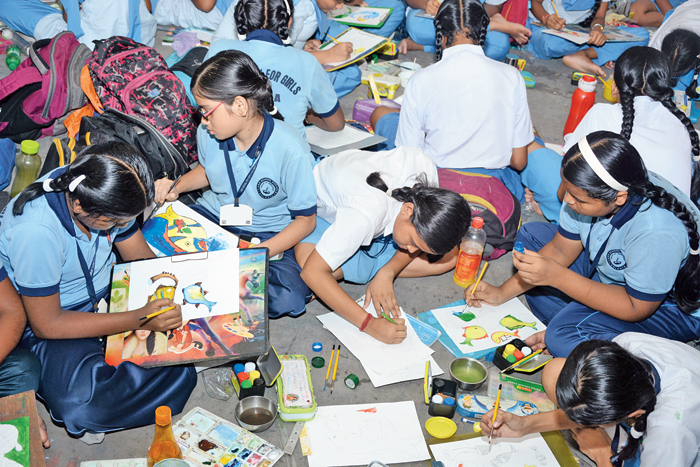 Students of Lake School for Girls at the patachitra workshop on their campus
Picture by Suvadeep Kundu Bhowmick
Chandreyee Ghose   |   Calcutta   |   Published 10.09.19, 08:16 PM

The wedding of a red-and-yellow bird; colourful fishes; Durga in all her grandeur and old folk tales got a fresh lease of life as 60 schoolgirls picked up paintbrushes to create patachitras.

Students of classes V to IX at Lake School for Girls were introduced to Bengal’s traditional art form by Milan-based artist Urmila Chakraborty.

Most of the participants admitted they had little idea about patachitras. “I had seen pat samples at a fair. But today I learnt new aspects of Bengal’s history and culture,” said Gayatri Das, a Class IX student.

The students were asked to tell stories through art, after listening to the folk songs that accompany the scroll paintings.

For Tiyasha Das of Class XI, it was a new experience. “I had not expected to learn so much,” she said.

Chakraborty’s workshop was as much about popularising the art form as promoting social harmony.

“My workshops are more about teaching societal issues, rather than art. The folk tales teach students the importance of solving conflicts,” said the artist who splits her time among Milan, Calcutta and several other cities, trying to bridge the cultural gaps between nations.

This was Chakraborty’s first workshop with schoolchildren. “I have been specialising in patachitra and the stories this art form tells for over a decade,” she said.

The tales and the paintings have moved with the times. Sisters Sonali and Jhumur Chitrakar of Naya village in Midnapore, who were present at the workshop, said the songs and artwork now include issues such as trafficking, child marriage, abuse and dowry.

“In our village, the songs and the art form pass on from one generation to another. Women mostly sing and practise it now. They get invited to showcase their talent. It has spelt empowerment for them,” said

Jhumur, who is barely 18 herself.

Anubha Purkait, the school’s art teacher, found the lessons interesting. “The girls had no idea what patachitra was or how connected our culture was to the art form. I plan to take the lesson forward,” she said.

Chakraborty plans to share selected artworks of the students at her next workshop in South Korea.