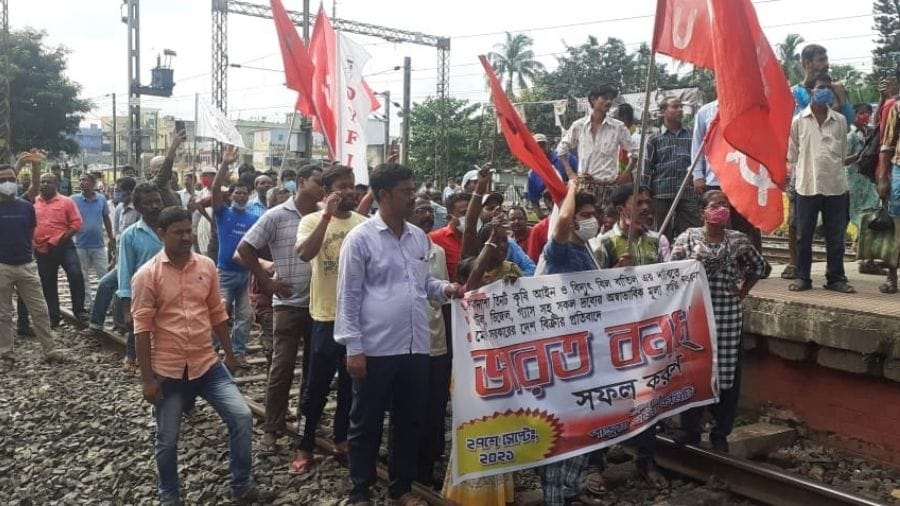 Left activists blocked roads and railway tracks across Bengal on Monday in support of the Bharat Bandh, while normal life remained largely unaffected in the state.

Markets and shops were opened as usual, while public transport operated almost normally, except for a few hitches.

Government and private offices registered usual attendance. Educational institutions are shut in state the due to the COVID-related restrictions.

In Calcutta, CPI(M) members blocked roads at College Street, Jadavpur and Shyambazar Five-Point Crossing but were swiftly removed by the police.

Road blockades were held in most of the major towns and cities in the state, including in district headquarters of Jalpaiguri, West Midnapore, East Midnapore, Hooghly and Coochbehar.

The ruling Trinamool Congress stayed away from the 10-hour bandh, but it supported the demands of the Samyukta Kisan Morcha which is spearheading the agitation.

There was no report of any untoward incident, a police officer said.

Farmer groups have alleged that these laws will end the 'mandi' and the MSP procurement systems and leave the farmers at the mercy of big corporates, even as the government has rejected these apprehensions as misplaced and asserted that these steps will help increase farmers' income.