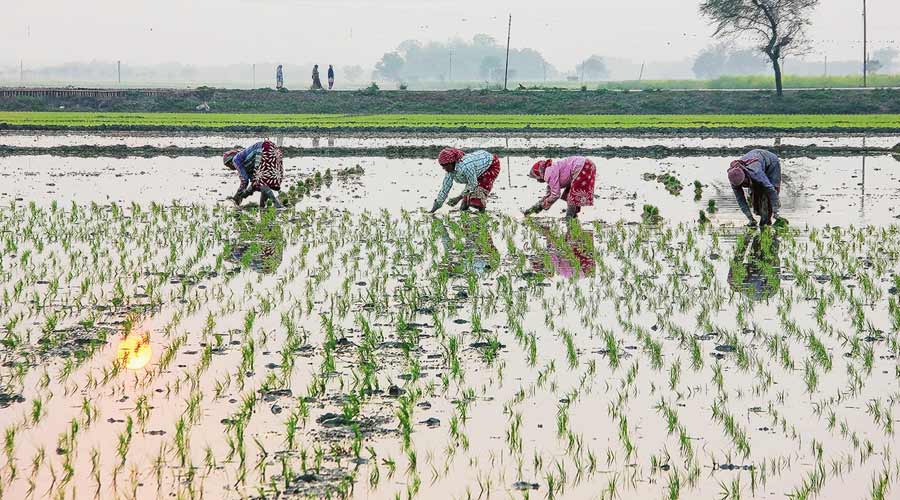 Lack of rainfall in the agriculture-rich districts of Bengal has halted sowing of paddy, leaving lakhs of rural workers in trouble at a time the state government had to press a pause button on the 100-day job scheme because of fund shortage.

Sources in the agriculture department said districts rich in agriculture — like East Burdwan, Hooghly, Nadia, Murshidabad and Birbhum — had recorded severe shortage of rainfall till July 8.

As the districts mainly depend on the monsoon to cultivate fields in absence of a proper irrigation network, the state could achieve only 4.87 percent of the target coverage of 41.81 lakh hectares in this kharif season, said a source.

As the official cut-off date for paddy sowing in the kharif season is August 15, the agriculture department is not ready now to press the panic button over meeting the production target, but is worried about the impact of lack of rain on the rural labour market.

“If the rainfall shortage is covered in the next two weeks, the state will easily achieve the target of paddy sowing on 42.81 lakh hectares by August 15. But the problem is until the sowing starts, rural workers, who are depending heavily on the kharif season, would suffer a lot,” said a senior official.

The official explained that since the labour budget for the 2022-23 financial year under the MGNREGA was yet to be approved by the Centre, no scheme under the scheme could be initiated in the state so far.

“This has created a huge demand for jobs at villages. Had sowing of paddy started on time, it could have resolved the crisis of jobs in rural areas. As the sowing is getting delayed, the rural labourers are in trouble as they don’t have jobs and hence no income,” said another official.

An agriculture expert said the delay in sowing the paddy could leave an impact on the state’s total paddy production.

“The seedlings are prepared in seedbeds and they need to be sowed within three weeks. Around 84 per cent seedbeds are already ready. The sowing can start only after districts get proper rainfall,” said a source.