Dangers of ignoring the threat to the city’s kidneys 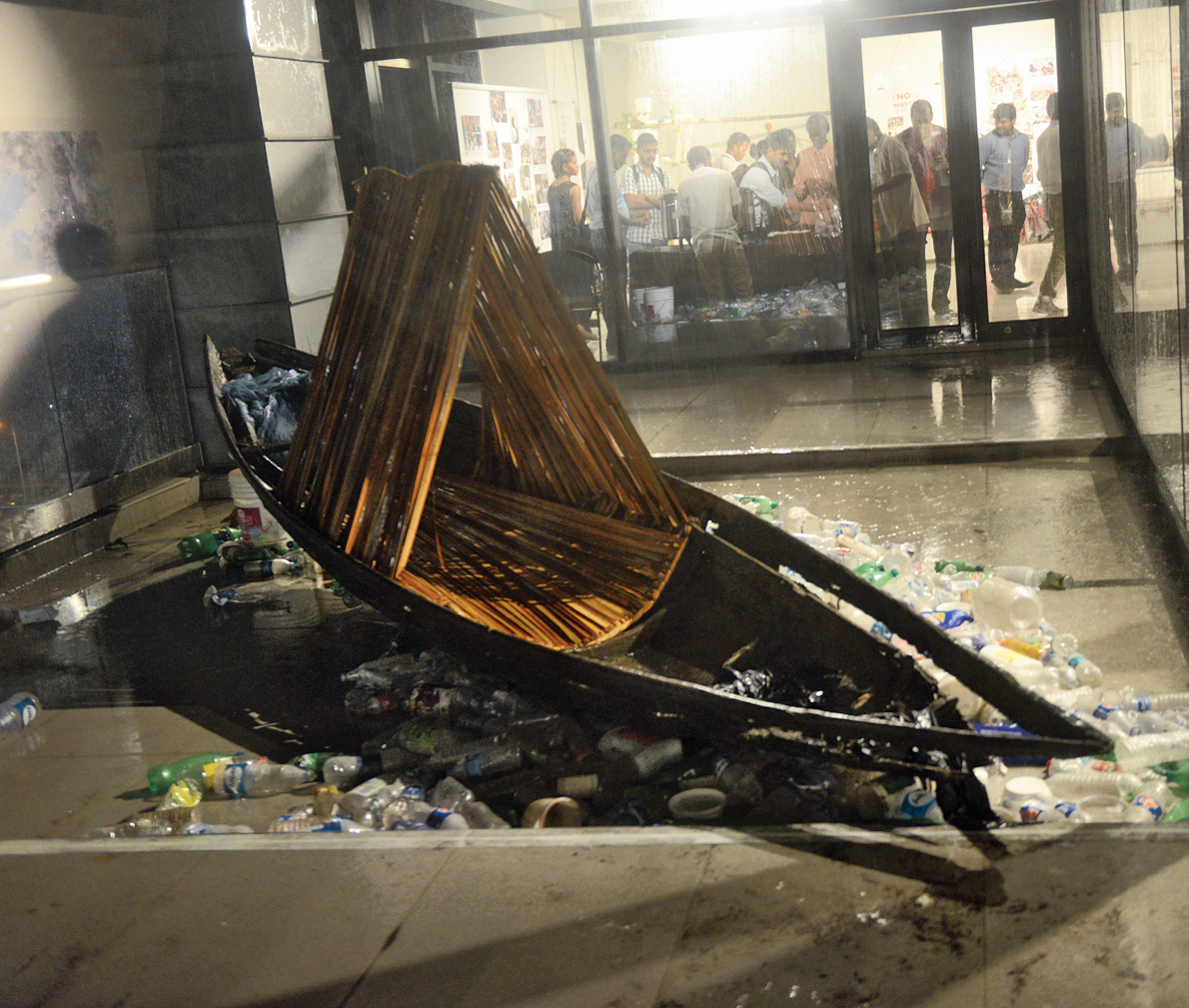 An installation by schoolchildren at an exhibition at the Kolkata Centre for Creativity shows a boat struggling to sail through a sea of plastic bottles. The exhibition is on till September 29.
Pictures by Bishwarup Dutta
Snehal Sengupta   |   Calcutta   |   Published 24.09.19, 11:49 PM

A boat struggles to sail through a sea of plastic bottles

An exhibition by children from two schools in Calcutta’s wetland areas reminds everyone the dangers of ignoring the threat to the vast stretches of water bodies to the east of the city.

The exhibition is part of the Climate Diplomacy Week 2019 organised by the German consulate and curated by an artists’ collective that works with children to focus on the challenges faced by the East Calcutta Wetlands.

At least 50 students from two schools — the Bamunghata High School and the Khereda School — participated in workshops held at their schools over the past few days where they were taught how to upcycle and recycle everyday waste such as plastic bottles, jars, caps and even tyres.

The students came up with installations, which were put up on the fifth floor of the Kolkata Centre for Creativity, off the Bypass.

Most of the exhibits show how rapid changes are taking place at the 12,500-hectare of water bodies known as the city’s kidneys at the cost of the rich biodiversity there.

A map of the wetlands has numerous black dots representing human settlements that have come up after filling the water bodies.

Jurgen Thomas Schrod, the German deputy consul general in Calcutta, said the focus was on the wetlands as climate change was “a real and imminent threat” that first affected greenery and water bodies before anything else.

“We need to raise as much awareness as we can. If we can get the residents of the area to understand that their homes are in an area that is ecologically sensitive, they will also take steps to conserve it and protect it,” Schrod said.

Phuleshwari Mondal, a Class IX student of Bamunghata High School who took part in the workshops, said she did not know that she lived in an area that had been declared a Ramsar site in 2002.

Jurgen Thomas Schrod, the German deputy consul general in Calcutta, at the exhibition

Mondal came to the exhibition armed with a set of rattles created from discarded soft drink bottle caps and bags made from used newspaper. She said she had no clue before the workshops that such things could be made from “waste”.

“Earlier, we would generally throw these into the water. We learnt not to do so and to make them useful again,” she said.

Nobina Gupta, an artist who runs Disappearing Dialogues — the collective that partnered with the German consulate to hold the workshops, said they wanted to teach children how to conserve the ecosystem they live in and make waste management fun. “The social, cultural and ecological aspects in this ecosystem are entwined, but unfortunately it’s losing its unique structure and needs conservation.”

“Our objective is to make them aware of their own heritage and to empower them to speak for themselves. And that sense of belonging will develop only when they realise what role they play in the ecosystem,” Gupta said.

The Ramsar Convention on Wetlands is an intergovernmental treaty that provides the framework for the conservation and wise use of wetlands and their resources.

The convention was adopted in the Iranian city of Ramsar in 1971 and came into force in 1975.

Much of Calcutta’s liquid waste drains into the East Calcutta Wetlands. The waste gets naturally treated before reaching the Bidyadhari river. The waste serves as food for fishes and plankton.