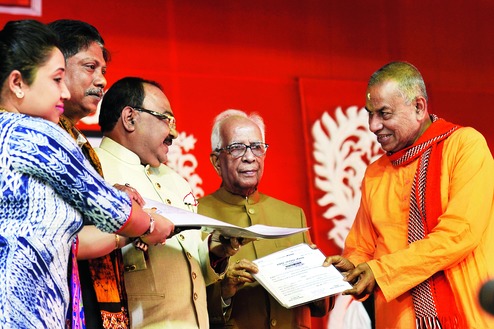 Sunday's programme was part of the four-day event to celebrate the platinum jubilee of Ramakrishna Mission Ashrama, Narendrapur, along with the diamond jubilee celebration of the Vidyalaya (school) and the golden jubilee of the industrial training centre. The event kicked off on the Narendrapur campus on Friday.

Chakrabarty's mother collected the award on his behalf.

The governor stressed on Swami Vivekananda's motto of building character through education.

Swami Suviranandaji Maharaj, general secretary, Ramakrishna Math and Ramakrishna Mission, Belur Math, was among the other speakers on Sunday.

Before these inaugurations, education minister and alumnus of the school Partha Chatterjee had inaugurated the annual Vidyalaya exhibition.

Sandipan Maharaj, the headmaster of the Vidyalaya, said the school had produced countless stalwarts since its inception in 1958.

He gave the keynote address on "Ramakrishna Missioner Sikshar Prabha".

Purnendu Basu, minister of technical education, had inaugurated the golden jubilee celebration of the industrial training centre on Friday.

The centre conducts short-term vocational courses under the Bengal state council of technical and vocational education and skill development.

The centre has helped school dropouts since its start in 1967, Ritesh Maharaj, the principal coordinator and monk in charge of the centre, said.