Jessop and Company Limited, the 196-year-old engineering company, has been in the news for the wrong reasons following two fires on the premises of its Dum Dum factory within seven days. 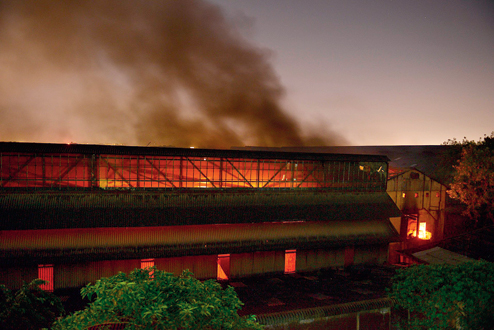 Jessop and Company Limited, the 196-year-old engineering company, has been in the news for the wrong reasons following two fires on the premises of its Dum Dum factory within seven days.

The state government ordered a CID probe into the fires following allegations of arson. Four men have been arrested for their alleged involvement in the fires and more arrests are likely. According to police, the accused had stolen things from the factory premises earlier.

Barrackpore police on Wednesday started a suo motu case against Jessop owner Pawan Ruia for alleged violation of a high court order to secure its perimeter. The case was forwarded to the CID on Thursday. The agency is also probing cases of trespassing and theft on the premises of the closed factory.

The fire department also lodged a separate case about multiple fires in the factory in the recent past.

According to sources, Ruia is likely to be summoned to the CID headquarters next week.

Metro presents a primer on the company and its present troubles.

Breen & Company was founded in Calcutta in 1788. Henry and George, sons of William Jessop, acquired Breen & Company on behalf of Butterley Company and the two companies were merged in 1820 and renamed Jessop & Company.

Ruia, his family and associates are the owners of Jessop but neither he nor his family members hold any position in it. They control Jessop through a maze of overseas companies. The directors are Saumitra Ghose, Baishali Roy and Rupendra Nath Kumar. The Ruia Group has so far maintained that it has no control over the assets of the Dum Dum plant.

Is it still functioning

No. The engineering unit that had once built the country's first iron bridge across the Gomti in Lucknow and was part of the team that built Parliament was shut down during the Lok Sabha polls in May 2014. The factory re-opened on August 9, 2014, for a day and Ruia promised that production would start soon. But the unit shut down again next morning.

The Mamata Banerjee government passed a bill on February 27, the last day of last Assembly session before the 2016 state elections, to take over the company along with Dunlop, also owned by Ruia.

The bill has been sent for Presidential assent. Union home ministry is the co-ordinating agency in this matter. It sought feedback from 12 ministries that raised several queries. The Bengal government was asked to respond to them, which it has done. Once the bill gets President's nod, the takeover process will be executed. Ruia is expected to challenge the bill in court.

Going by the Singur experience (the Tatas had challenged a government bill), the process may take years. The state government has been paying Rs 10,000 a month to 1,100 workers of Jessop and Dunlop.

Theft from the factory premises has been a regular affair since the unit shut down. In 2016, the police recorded 10 cases of theft. Cops have been attacked while trying to prevent thieves from leaving with factory property on trucks. The criminals are allegedly hand in glove with a section of employees, police and local leaders.

Ruia is named in an FIR that the police lodged suo motu on Wednesday and the CID is probing the allegation. Shortly after the FIR was lodged, Ruia met fire minister Sovan Chatterjee. Sources said Ruia claimed he was not involved with what had happened at the factory in the recent past. Chatterjee said he "did not listen to Ruia".

According to police sources, the CID might arrest Ruia for the sake of investigation. Police have been deployed on the factory premises round-the-clock. Civic workers have been engaged to clear the overgrowth in the factory.

Industry observers wondered what could be the possible impact of sending Ruia to jail for fire and theft. While he has certainly failed to revive the company, arresting him may send the wrong signal to the industry, said one industrialist.

Jessop, which used to make railway wagons, needs a complete overhaul to be competitive in the national market.

The company's biggest asset is land. Spread over 70 acres, less than a kilometre from Dum Dum airport, the land is potentially prime real estate. The area is dotted with highrises. The market value of one cottah land is Rs 60 to Rs 65 lakh. The Jessop factory is on 4,200 cottahs, which can fetch more than Rs 2,700 crore according to some estimates.

But the land is factory land and cannot be used for real estate without government permission. Moreover, the local municipality has to sanction any building plan on it.