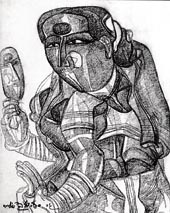 As an artist, Thota Vaikuntam has never found it necessary to avoid the decorative. In fact, he has always welcomed it as an essential part of our culture. The Hyderabad-based artist, known for his paintings of Telengana women, was in the city recently to inaugurate his recent charcoal drawings at Gallery Sanskriti.

“We all are decorative by nature. Men or women, we love to decorate ourselves with jewellery, with flowers, with clothes, bindis, cosmetics,” explained Vaikuntam.

Vaikuntam, 64, had ventured into the art field in the 1980s with a series of studies in charcoals which brought out the artist within him. He was using his Baroda-Hyderabad art training to chart his own course. And today, the art director of films like Mabhoomi, Ranganlakala, Dasi and Mati Mayi, Vaikuntam has “no more time for films”.

For him, the human face is the most significant part of the human body that plays an important role in our lives. “I have been reading faces since I was a child in my village. Today, I no longer have to see these people, they appear in my mind automatically,” smiles the artist.

The current series, called Mukham, shows women with nose rings, large bindis and flowers in their hair. Some appear smug, some pleased, some with eyes closed in piety. There are men, too, moustachioed and draped in traditional South Indian attire and bald priests with long tilaks.

Known for his use of vibrant but flat areas of colour, Vaikuntam says that he wants to try out new things with tones. Drawing, he says, is the most important part of an artist’s expression.

“All my paintings start off as charcoal drawings, where I plan what I want to do next,” explained Vaikuntam.

The Mukham series reflects his next big venture — a series of large compositions in colour, where the theme will be festivities like Dussehra and Batkanma in his village, Burugupally. Burugupally is today the nucleus of his creativity.

“I know the place, its culture and its social traditions, its traditional values, that I cherish. Unfortunately, we are losing them due to our changing lifestyle. They are disappearing like the huge tree, or Burugu, that gave the village its name. You can say that my canvasses will attempt to capture some of these values for posterity,” signed off the artist.