In fond memory of Uday Shankar 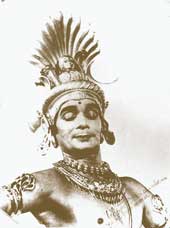 Dance is a primitive form of expression that emulates and explores the eternal force of life. Indian dance, despite being a treasure-trove of movements, expressions and variety, remained for a long time, the exclusive domain of the desi rich. It was first released off its shackles by a visionary, Uday Shankar. He borrowed elements from classical forms and re- worked on them as he choregraphed ballets. He toured abroad extensively with his troupe and mesmerised the West with his version of Indian ballets. The West Bengal State Music Akademi and West Bengal Dance Group Federation have been celebrating this pioneer’s birth anniversary by organising a festival of dance annually. This year's fest starts today with a colourful procession from Golf Club Road to Rabindra Sadan at 1.30 pm. Some of the well-known dancers and dance troupes, including Malabika Sen (Bharata Natyam) and Madhuboni Chatterjee (Bharata Natyam) and groups including Mamata Shankar Ballet Troupe, Nrityangan and Nrityayan, will be performing in this week-long event. A special performance by Ananda Shankar Centre for Performing Arts will be held on December 11 to celebrate Ananda Shankar’s birth anniversary.