Advertisement
Home / West-bengal / ‘If we are all sisters and brothers, how can we kill one another?’

‘If we are all sisters and brothers, how can we kill one another?’

On Christmas Eve, 2 messages: one by Calcutta's archbishop and the other by a follower of Vivekananda 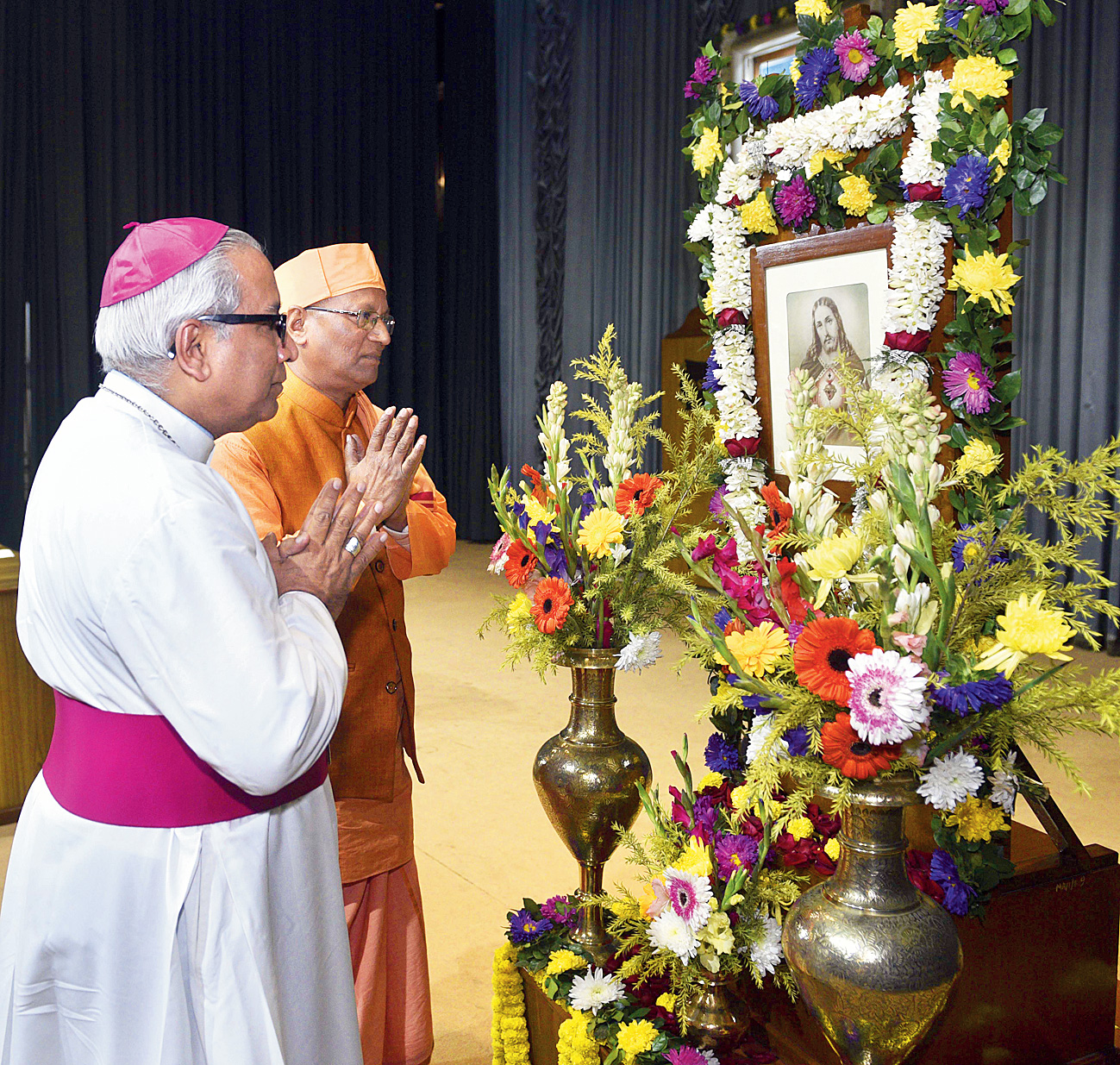 Archbishop of Calcutta Thomas D’Souza and Swami Suparnananda, secretary of the Ramakrishna Mission Institute of Culture, stand with folded hands before a portrait of Jesus on the dais at Vivekananda Hall at the Golpark institute on Monday.
Gautam Bose
Mita Mukherjee   |   Calcutta   |   Published 24.12.18, 09:45 PM

Christmas Eve occasioned the confluence of two messages, one delivered by the Archbishop of Calcutta and the other by a follower of Swami Vivekananda.

“If we are all sisters and brothers, how can we hate one another… how can we kill one another? We cannot do that,” Archbishop Thomas D’Souza said at the Ramakrishna Mission Institute of Culture on Monday.

The Archbishop and the monk spoke extensively on the spiritual aspects of Christmas in their speeches. The emphasis on “openness in religion” and “acceptance of other faiths” emerged as the focal points.

The Archbishop said: “Swami Vivekananda in his famous Chicago address had called all those who were present his sisters and brothers. It was a beautiful expression but a very strong message. On Christmas Eve, let us bring this message…. If we are all sisters and brothers, how can we hate one another… how can we kill one another? We cannot do that. If we have the same humanity, have the same feelings as human beings, how can we not accept others…? If it happens, it saddens us. We can’t hate or kill others unless there is loss of humanity, compassion, sensitivity and concern for others.”

Swami Suparnananda thanked the Archbishop for recalling the “great message” of Swami Vivekananda.

The Ramakrishna Math and Ramakrishna Mission had invited Archbishop D’Souza to address the Christmas Eve gathering at its Golpark institute because, as a senior monk had said, “we need to understand other religions more than ever”.

As part of the exemplary gesture, a priest from the Calcutta Archdiocese, Father Rodney Borneo, went to the Ramakrishna Mission Ashrama in Narendrapur.

There, Father Rodney called it “an historic occasion”.

“I feel today is an historic occasion because a Christian purohit (priest) is sitting in your temple and feeling at home. I’m feeling at home…. I feel I’m at my girja (church). My God is here. My loved ones are here,” he said in Bangla.

The audience in the temple broke into applause as he spoke.

“Our relationship with God is broken when we differentiate between people,” Father Rodney said.

Swami Sarvalokananda, secretary of the Ramakrishna Mission Ashrama, Narendrapur, said: “We usually think he (Father Rodney) is a Christian priest and I am a monk and we are different but none of us is different. We are one. We propagate truth. The Christian priest is doing so, and so is the monk…. There can be no two truths. Truth is one.”

Swami Sarvalokananda spoke of the significance of what Jesus stood for in today’s context.

“The world is racked by violence… people cannot trust each other… people have forgotten to love each other…. So Christ’s words of brotherhood, peace and love are extremely relevant today.”

Swami Sarvalokananda, secretary of the Ramakrishna Mission Ashrama, Narendrapur, and Father Rodney Borneo (right), a priest with the Archdiocese of Calcutta, at the Christmas Eve gathering in Narendrapur.
Sanat Kumar Sinha