If I can’t deliver, I will quit, says BJP MP Raju Bista 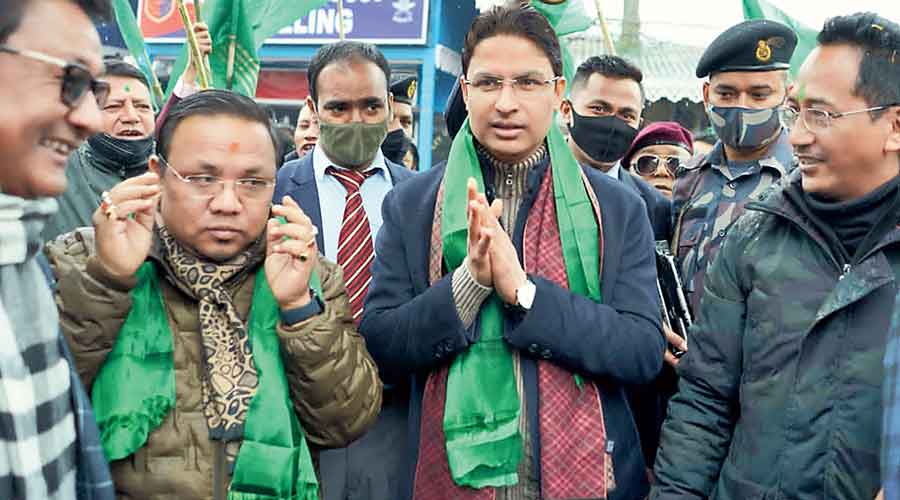 BJP MP Raju Bista on Friday said he would quit politics if the Centre failed to provide justice to the people of the Darjeeling hills, Terai and the Dooars by 2024.

The BJP had promised to grant tribal status to 11 Gorkha communities and find a “permanent political solution (PPS)” for the region. Most in the hills have interpreted the PPS as a separate state of Gorkhaland.

“I am speaking on record. If the people of Darjeeling, Terai and the Dooars do not get justice (by 2024), Raju Bista will resign from politics and will not contest any election in future,” the MP said on the last day of the campaign for Darjeeling municipality elections.

On May 17, 2019, which was the last day for campaigning for Darjeeling Assembly byelection, Bista had then created a flutter by uttering the “Gorkhaland” word after remaining silent for two months on the issue as Bengal was voting for Lok Sabha polls.

The Darjeeling Assembly bypoll was held soon after the Lok Sabha elections had been over in Bengal.

Addressing a gathering at Chowrasta here, Bista had then said: “What will Gorkhas do? They will bring Gorkhaland.” They were a reference to GNLF leader and BJP candidate Neeraj Zimba.

When reminded of the 2019 promise, Bista on Friday said he still stood by his statement.

Bista said his biggest fear was that people would mark him as an incompetent MP if he couldn’t deliver justice to the people who elected him. “Day and night, I think that if I choose to remain away from politics tomorrow, people should not say that he was not a good MP. I fear this and I am trying to work on this issue day in and out,” said Bista.

The Darjeeling MP, however, said he was in constant touch with senior BJP leaders on the issue. “I am confident that only the BJP will do something for our people” he added.

The Centre has so far formed two semi-autonomous bodies for the hills. The Darjeeling Gorkha Hill Council (DGHC) had been formed in 1988. After it ceased to
exist, the Gorkhaland Territorial Administration was constituted in 2012. Both these bodies were formed by the Congress government at the Centre.Bista did not lose an

opportunity to hit out at the Trinamul Congress-led state government. “Until permanent solution is worked out or Gorkhaland is created, the West Bengal government will not allow any administrative set-up to function properly in the hills.... They do not want the people of the hills to stand on their feet fearing that the demand (of Gorkhaland) would be raised again,” said Bista.

In the run-up to the Siliguri Municipal Corporation (SMC) and Darjeeling civic elections, Kurseong BJP MLA B.P. Bajgain had written to the state BJP that he would not campaign for the party unless a Gorkha was included in the state committee.

Bajgain has stuck to his words and kept himself away from the campaign.