Tripura House, the stately Ballygunge Circular Road mansion that is listed as a Grade 1 heritage property, will have a residential highrise share a portion of its 100-cottah compound after the West Bengal Heritage Commission gave its nod to a project rejected by the Calcutta Municipal Corporation. 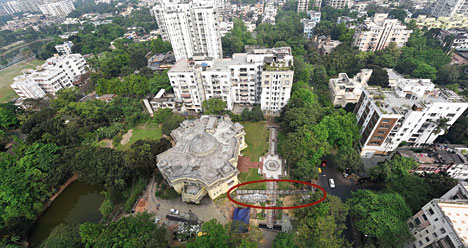 Ballygunge: Tripura House, the stately Ballygunge Circular Road mansion that is listed as a Grade 1 heritage property, will have a residential highrise share a portion of its 100-cottah compound after the West Bengal Heritage Commission gave its nod to a project rejected by the Calcutta Municipal Corporation.

The G+12 apartment building with 22 units, each carrying a price tag upwards of Rs 6 crore, has been planned to the west of the two-storey Tripura House. A barricade has been put up to carve a 30-cottah construction site out of the original estate.

Businessman Utsav Parekh, whose Nexome Group is partnering the owners of Tripura House for the project, said a distance of 24 feet would separate the new building from the heritage mansion.

"I am well aware of the consequences if any damage is done to Tripura House, which is why we got the celebrated architect Hafeez Contractor to do the design. We have spent two years getting the necessary permissions," Parekh, also the co-promoter of Bengal Aerotropolis that built Andal airport, told Metro.

The heritage conservation committee of the municipal corporation had refused permission to build a highrise within the Tripura House estate by citing the possibility of damage to the old building.

Tripura House, which was built in 1891 by Maharaja Bir Chandra Manikya and renovated by Maharaja Bir Bikram in 1931with some additions and alterations, is listed in the municipal corporation's Graded List of Heritage Buildings as a Grade I heritage property. The criterion for this status is "architectural style".

Any external change to a Grade I heritage property is illegal.

The state heritage commission is an appellate authority that can be approached when the municipal heritage conservation committee denies permission for a project.

Artist Suvaprasanna, the chairman of the heritage commission, told Metro over phone that the project was cleared after confirming that it would maintain a safe distance from Tripura House.

"There is a mandatory distance that any construction site needs to maintain from a heritage building. We have verified that the project maintains this gap. At our intervention, they (the promoters) have cut down on horizontal expanse and are instead doing vertical expansion," he said.

The 30 cottahs earmarked for the project comprise a rectangular plot, including a portion of the driveway of Tripura House. A separate driveway is to be created for Tripura House.

The municipal corporation had last year downgraded the heritage status of the building that housed the old Kenilworth Hotel to Grade III, enabling its demolition by the present owners. Workers started breaking down the three-storey white landmark near the crossing of Middleton Street and Little Russel Street in late-February, triggering allegations by heritage conservation activists about a builder-official nexus.

The civic body said the heritage downgrade of the building happened last year in accordance with law.