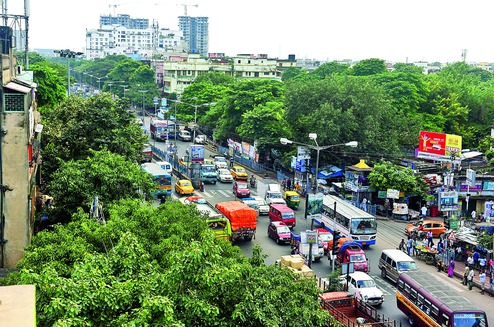 Sept. 22: A six-lane elevated corridor has been planned over BT Road between Tallah Bridge and Dunlop to break the gridlock caused by increasing traffic on a thoroughfare without space to grow horizontally.

The 5km project would cost the government around Rs 1,200 crore, an expense that officials said was the only way out of the dead end of its hands-off policy on land acquisition.

"We need to double the capacity of the six-lane BT Road to keep up with the volume of traffic. Since there is no scope for that, an initiative has been taken to create a six-lane elevated road over the existing one. A detailed project report will soon be prepared by the PWD (roads)," said a senior official at Nabanna, which houses the chief minister's office.

BT Road, the abbreviated name of Barrackpore Trunk Road, starts at the Shyambazar five-point crossing and connects Calcutta to Barrackpore. The major portion of the 22km road, most of it between Shyambazar and Kamarhati, is 21 metres wide and has six lanes.

"Based on the current rate of traffic growth, the capacity of BT Road would reach saturation point by 2021," the official said.

In the late Nineties, the volume of traffic on BT Road was less than 7,000 passenger car units a day. But the carriageway was congested even then because of encroachments and illegal parking.

By 2010, traffic volume had increased to 12,000 passenger car units a day, worsening the daily congestion. "The elevated road should take care of the average increase in traffic volume over the next 30 years," a PWD engineer said.

According to a bureaucrat, the state government never even considered buying land for expansion because persuading all landowners to let go off plots along the project alignment was not feasible. "An elevated road emerged as the only alternative to solve the problem of growing traffic. This is a test case. If the project succeeds, it might make the state think different in areas where land acquisition is a barrier to development," he said.

Several road-widening projects in Bengal have been grounded by land logjams. The National Highways Authority of India (NHAI) gave up on widening National Highway 35, which connects Barasat and Bongaon in North 24-Parganas, after the state government failed to provide the required land.

The downside to the government's alternative plan for BT Road is cost. "Had the existing road been widened, the budget would have been about Rs 300 crore, including the cost of land acquisition. Now the government has to spend four times more," the bureaucrat said.

Bengal's target is to set up a kitty of Rs 14,000 crore for infrastructure projects. Sources said the finance department had asked about 30 departments to return unused funds so that these can be utilised for new projects like the elevated corridor over BT Road.

If this works out, the government intends to propose an elevated road between Kona and Vidyasagar Setu over National Highway 117. This stretch is likely to reach saturation point by 2021.

"A 6km elevated stretch would entail expenditure of about Rs 1,400 crore. A smooth run for the BT Road project would strengthen our case for similar expansion by the NHAI along NH-117," an official said.