Hero’s welcome for doctors at NRS 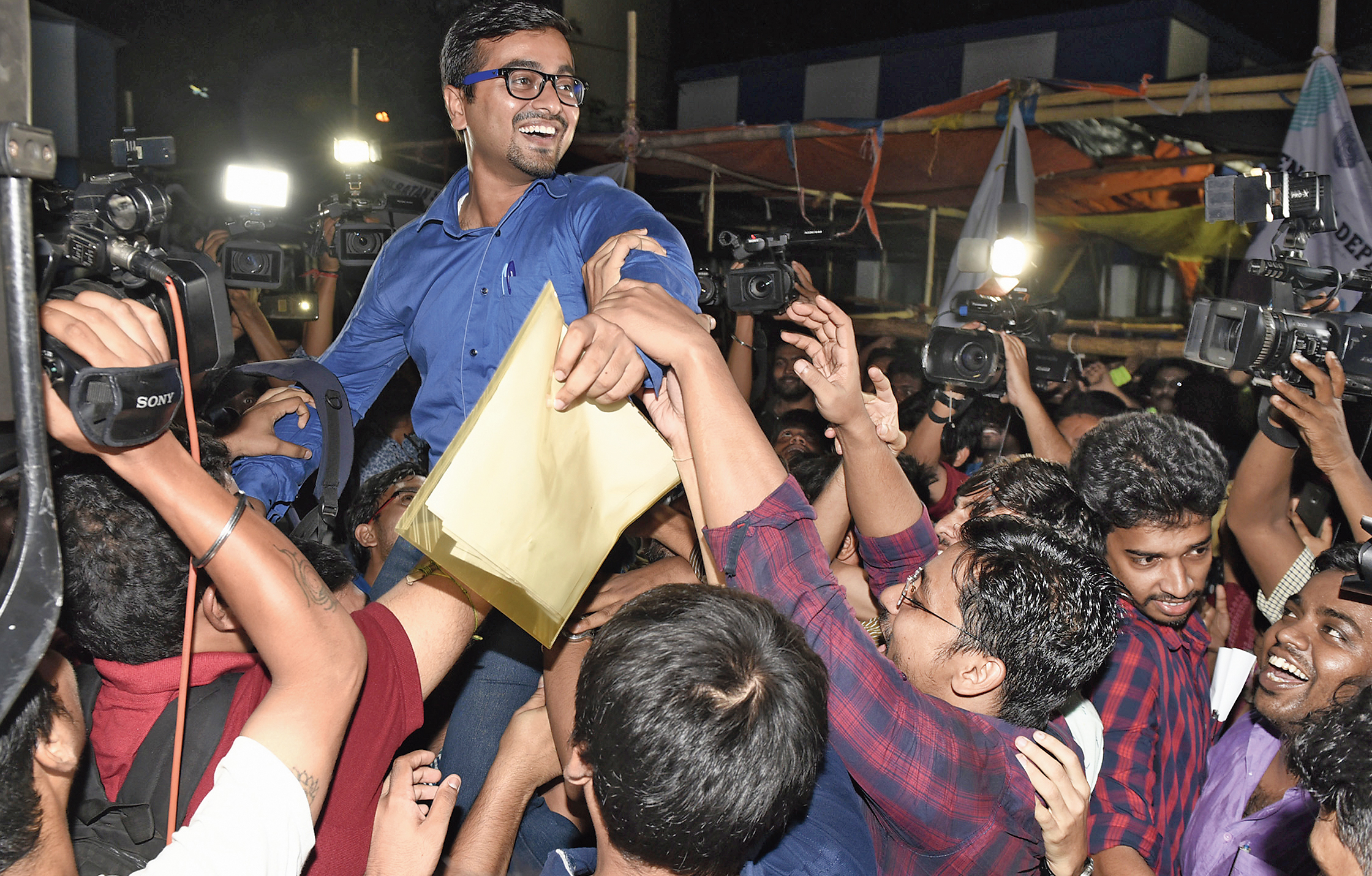 Junior doctors hoist a member of the team that met chief minister Mamata Banerjee at Nabanna on their shoulders after the representatives returned to NRS Medical College and Hospital on Monday evening.
Picture by Sanat Kr Sinha
Subhajoy Roy And Snehal Sengupta   |   Calcutta   |   Published 18.06.19, 01:26 AM

Up on the shoulders of their comrades, several junior doctors who met chief minister Mamata Banerjee at Nabanna on Monday were greeted like heroes returning victorious from a battle.

Around 8.30pm, the junior doctors announced they were withdrawing their ceasework and would resume duty at the earliest. They, however, did not specify any deadline.

As the bus carrying the 31 junior doctors who met Mamata entered NRS Medical College and Hospital, the jubilant protesters on the campus surrounded it on all sides. The representatives got off the bus one amid slogans: “Ashche kara? Lakkhi chhele (Who have come? All good boys.)”

They were showered with flowers and carried on shoulders as a victory rally marched through the hospital premises.

The slogans heard on the campus played around the word Lakkhi chhele, a term Mamata used while addressing the junior doctors at the meeting when she asked them to end their ceasework.

A junior doctor said: “The chief minister had called protesting doctors ‘bohiragoto’ (outsiders) during her visit to SSKM Hospital on Thursday. We then coined the slogan ‘Aamra kara? Bohiragoto. (Who are we? Outsiders)’. Our new slogans are a play on the word Lakkhi chhele.”

The bus ferrying the 31 doctors entered NRS through the gate on APC Road, just beyond which the junior doctors had been sitting on protest since Tuesday.

A procession with the 31 doctors, who were being showered with flowers, started at the gate and ended at the academic building, around 300m away. The junior doctors then entered the building to attend a “general body” meeting, where their next steps were to be decided. “We are withdrawing the ceasework. We express our gratitude to the chief minister,” said a junior doctor after the meeting. 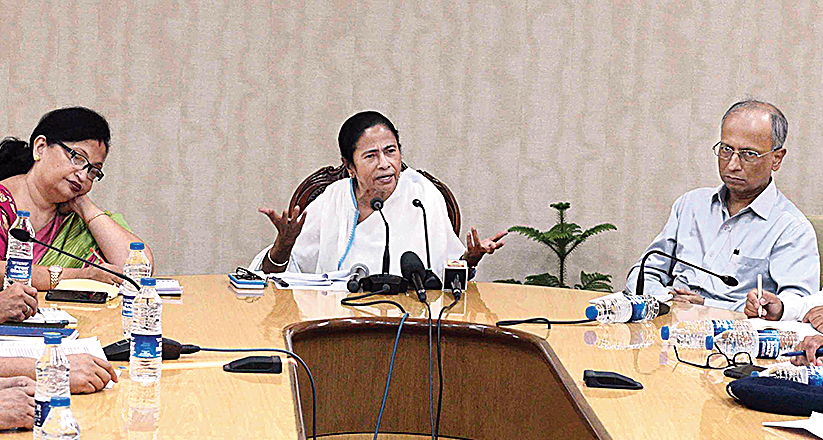 Chief minister Mamata Banerjee at the meeting
The Telegraph picture

But the doctors didn’t make it clear when they would resume duty — on Monday night or Tuesday morning.

They also added that they would wait for three days to see whether the government was implementing some of the promises the chief minister made.

“The chief minister told us all demands couldn’t be met in a short time. But we will wait for three days to see whether some demands that can be met during this short period have been met,” a junior doctor said.

When some journalists asked them when the APC Road gate, which had been closed till Tuesday, would reopen, the doctors said it would be thrown open immediately. The doctors then went to the gate and removed the hospital bed frames that were used as barricades to prevent people from entering.

Earlier in the afternoon, the doctors on ceasework managed to get a TV set installed in front of their agitation area to watch the proceedings at Nabanna. A junior doctor said the TV was brought from the caretaker’s room located close to the spot.

Till about 2.30pm, the junior doctors were not sure whether they would attend the meeting at Nabanna because the government had not yet made it clear whether it would accept their demand to telecast the meeting live.

But once the word reached them that the government would do so, the junior doctors immediately made arrangements to install a TV in front of their agitation area. Arrangements for live telecast were also made in the auditorium of the hospital.

While the meeting was under way, the agitating doctors clapped several times. When Mamata said police would not slap any case on the protesting doctors, the ones at NRS shouted in joy.

There were jeers when the chief minister said her government had improved the infrastructure of hospitals a number of times since she came to power in 2011.

However, the mood had turned into one of joy and victory when the meeting ended.

A draft of the minutes of the meeting chief minister Mamata Banerjee held with junior doctors at Nabanna says a dozen broad decisions were taken. They are