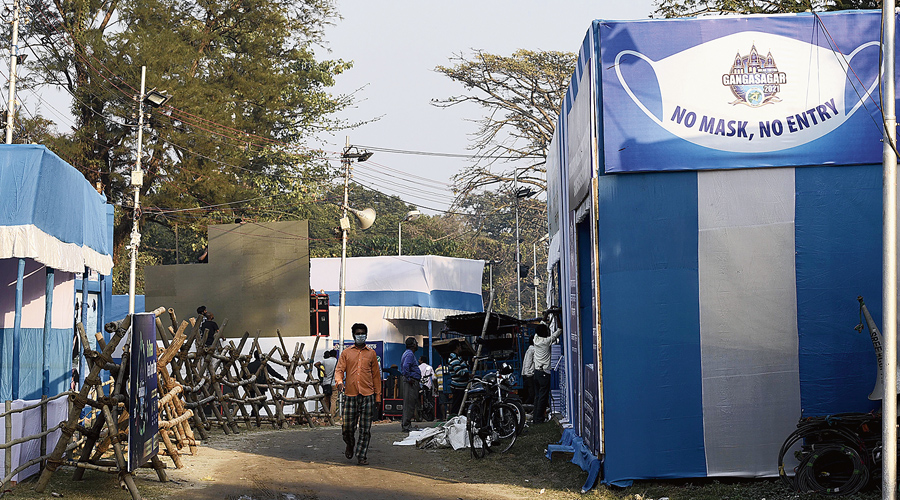 The Calcutta High Court on Wednesday emphasised on the need for ‘e-snan’ (e-bathing) at the Gangasagar Mela, as it allowed the festival to be held amid the coronavirus pandemic.

The HC said it was important that people go for e-bathing in order to avoid crowding for the holy dip at the confluence of the Ganga and the Bay of Bengal, in view of the pandemic.

A division bench comprising Chief Justice T.B.N. Radhakrishnan and Justice Arijit Banerjee asked the Bengal government to provide ‘e-snan’ kits -- a small container with the holy water of Gangasagar -- to pilgrims at the fair site in Sagar Island for free.

It asked the government to provide the kits for a nominal fee to people who order for it from other places.

The state administration already announced that such an arrangement has been made.

The government also informed the court that the number of pilgrims who have arrived this year is much less than that in other years.

It told the division bench that all health protocols are being maintained in the fair which attracts lakhs of pilgrims every year.

In a report submitted to the High Court, the state’s Director of Health Services (DHS) said that the risk of Covid-19 transmission through bathing in flowing water like a river or saline water in a sea is extremely low.

“However, as a measure of abundant precaution, pilgrims are allowed to go for a dip in a staggered manner maintaining safe distance between one another,” the report by the DHS said.

The Calcutta High Court on January 8 had directed the Bengal government to file a report on Wednesday regarding the arrangements made for organising the Gangasagar Mela, based on which it would decide whether or not to allow the annual fair this year.