Experts’ panel puts Mollar Bheri out of bounds for civic body; search on for new site 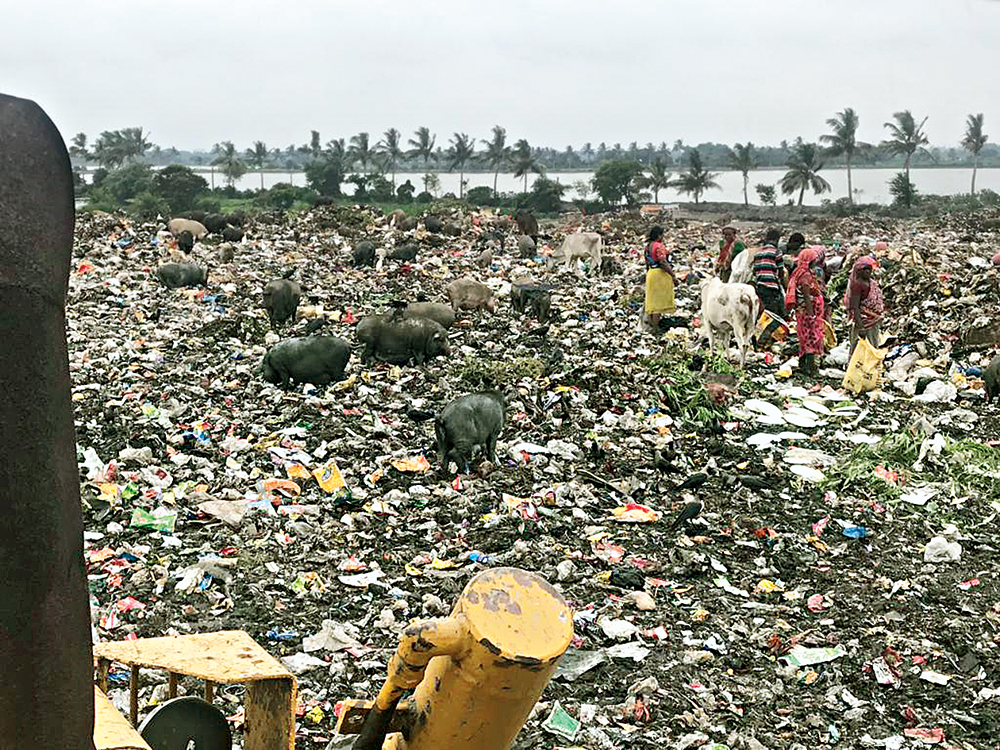 The expert committee, set up by the National Green Tribunal to inquire about the violation within the internationally acclaimed East Calcutta Wetlands, has recommended that the Bidhannagar Municipal Corporation “stop further dumping of solid waste at the Mollar Bheri site”. Solid waste continues to be dumped at the bheri which falls within the wetlands area, it also observed.

“As East Kolkata Wetland is a Ramsar Site, Bidhannagar Municipal Corporation shall stop further dumping of solid waste at the Mollar Bheri site and is required to find the alternative / new site for MSW (municipal solid waste) facility” stated the report. Comparative satellite maps of the area clearly show that the size of the waste dumping site at Mollar bheri, at the rear side of Sector V, has almost doubled in the past 15 years. The report also observed that the activity is polluting the fishery ponds around — the mainstay of livelihoods of thousands.

The East Calcutta Wetlands is insulated by a Calcutta high court order of the 1990s that bars any land-use change in the area and was subsequently listed as a Ramsar site, on being selected as wetlands of international importance, that automatically brings with it a series of restrictions.

“We are not aware of the report that you mention, but we will abide by the judicial verdict,” mayor Krishna Chakraborty told The Telegraph Salt Lake on Wednesday.

Chakraborty pointed out that the civic body, in consultation with urban development department, is searching for a new site for solid waste disposal but admitted that they were yet to find a suitable one. “We have been offered a plot in Barasat, but transportation to the spot will take a lot of time and hence seems unsuitable,” added the mayor.

The civic body, she added, was considering various technological solutions to minimise waste so it could be dumped in a smaller area. “We will soon start barricading part of Mollar Bheri as per the order of the National Green Tribunal,” said Chakraborty, adding that others including New Town Kolkata Development Authority also dump their waste here.

Earlier, the tribunal had fined the civic body Rs 10 lakh for not complying with its directive to fence the dumpyard so that the adjoining water bodies do not get contaminated and threatened to enhance the fine to Rs 25 lakh if the order was not implemented quickly. “Two months down the line, the civic body is yet to take any action on ground and risks further penalty,” pointed out environment activist Subhas Datta, the petitioner.

The six-member committee, comprising senior scientists from the union environment department and the central pollution control board as well as representatives of the state pollution control board, the State Fisheries Development Corporation, the district magistrates of South and North 24-Parganas, finalised the current report over the last five months mainly on the basis of satellite imageries from 2005 to 2019, registered police complaints and field visits.

The committee was constituted in end-May by the NGT after Datta complained that the 12,500 hectre-spread wetlands was widely encroached. According to experts, millions of gallons of waste water generated by Calcutta and adjoining cities get naturally treated in the wetlands, hence acting as the city’s kidney, and then is used to generate fish and vegetables that sustains close to a lakh people.

The committee observed that “substantial portion of water bodies/ agricultural land has been converted into residential land… and constructions were carried out since 2005” and shared that during inspection they found open advertisement for land in wetlands which is illegal.

The report referred to over 350 complaints that East Calcutta Wetlands Management Authority itself lodged in the last 13 years and referred to the comparative satellite maps of the area. The report annexed the comparative maps of various mouzas within the East Calcutta Wetlands which clearly show how construction has increased manifold in the last 15 years, including in mouzas falling within Salt Lake.

The committee recommended setting up of “a task force for cases of violations of Rules/Act relating to EKW (East Kolkata Wetlands)” immediately. It also advised the east Calcutta authority to prepare a management plan for the area so that its ecosystem can be preserved. “The report vindicated what we have been complaining since long,” observed Datta.