This year, Madhyamik examinees from the Ultadanga area are also being offered a free ride to the examination venue 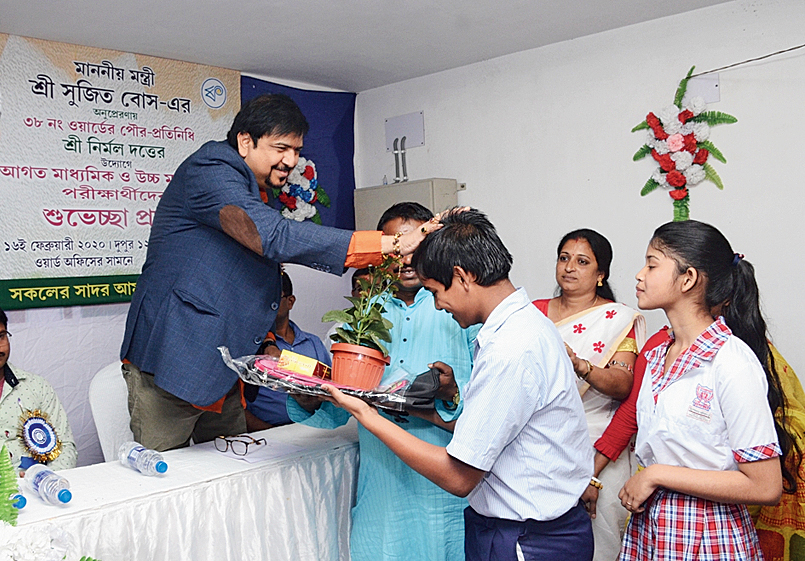 A gold ring will be given to three students from Duttabad doing the best in Madhyamik examination this year. Their educational costs will also be borne for a year.

The announcement was made at a programme held on Sunday at the recently built Durga Mancha. “I want to introduce an element of competition among students of my ward. Top ranks in the district or in the Bidhannagar sub-division are too distant a dream for them. I have never got a chance to go to school. So I want to do as much as I can for our students,” said Nirmal Dutta, councillor of Ward 38 which includes Duttabad.

Minister Sujit Bose was present at the programme and handed over a sapling and a bag to 70 examinees.

A Madhyamik examinee being greeted by councillor Nirmal Dutta before taking the free auto ride to the examination venue.
(Basudeb Behera)

This year, examinees from the Ultadanga area are also being offered a free ride to the examination venue. “We have pressed 100 auto rickshaws into service to take students to schools in the vicinity, be it Salt Lake, Lake Town, Beleghata or even further away in Maniktala or Shyambazar,” said Dutta, who is also the secretary of the Bidhannagar unit of Indian National Trinamul Trade Union Congress. Santiranjan Kundu, councillor of the Calcutta Municipal Corporation’s Ward 32, is also with him in this venture, he said.

Students were thankful for the service. On Tuesday, the first day of the examination, Bidhannagar Government High School student Ranit Roy was making his way to the auto stand in Ultadanga from his Police Abasan residence when volunteers spotted him as a Madhaymik examinee. “I was gifted a water bottle, a pen and a rose and promptly put on an autorickshaw. The driver refused to take the fare when we reached Tank 8,” said the boy, whose examination centre was Acharya Prafulla Chandra High School for Boys in BK Block.

The auto drivers are happy to offer the service but have one grouse. “Yes, we are travelling out of our official routes for rendering a service to society. A certificate by minister Sujit Bose is pasted on our windshields. Why are the green police still bothering us, demanding papers?” complained Tapas Bose, an auto driver.