Thick clouds of smoke hung heavy over the most famous landmark associated with Calcutta as fire raged at the godown on the Strand Bank Road, along the Hooghly and less than 100metres from Howrah bridge, on Saturday.
Pictures by Pradip Sanyal and Bishwarup Dutta
Subhajoy Roy   |   Howrah   |   Published 09.06.19, 01:38 AM

A large portion of a godown along the Hooghly and barely 100 metres from the Calcutta end of Howrah bridge was gutted in a blaze that started around 2.15am on Saturday and raged for more than 12 hours.

The godown on the first-floor of the building on the Strand Bank Road stored all kinds of inflammable items, ranging from tarpaulin sheets and nylon ropes to tent cloth and medicines, but did not appear to have any fire-fighting mechanism, a fire brigade official said.

Since morning, residents across large parts of north and central Calcutta could see tall columns of smoke rising above and surrounding the Howrah bridge.

The fire brigade stands on a portion of the godown roof to fight the blaze with water sourced from the Hooghly. Smoke was billowing out on a volcanic scale because of highly inflammable goods stocked in the godown.
Pictures by Pradip Sanyal and Bishwarup Dutta

People living in quarters and shanties close to the gutted warehouse said the first flames were seen rising from some shacks located along the circular railway tracks. The warehouse building stands between the railway tracks to its east and the river to its west.

“The fire started in the shanties around 2.15am. It first spread to the ropes and drums of chemicals kept along the boundary wall of the warehouse. The tall flames then leapt to the first floor of the warehouse ,” said Bablu Sardar, who lives in a shanty.

A part of the godown roof had already caved in because of the prolonged exposure to intense heat. The right side of the picture shows the damage caused to the roof.
Pictures by Pradip Sanyal and Bishwarup Dutta

The Calcutta Port Trust is the owner of the building, but has leased out the space to companies that run the warehouses. Firefighters, who went inside the gutted warehouse, said it appeared to them that the godown didn’t have any fire-fighting arrangement.

“We didn’t notice any water hydrants in the building. The ceiling of the gutted godown didn’t have water sprinklers and fire alarms. There were some fire extinguishers, but we have to check if their shelf life had expired,” said a fire service official. 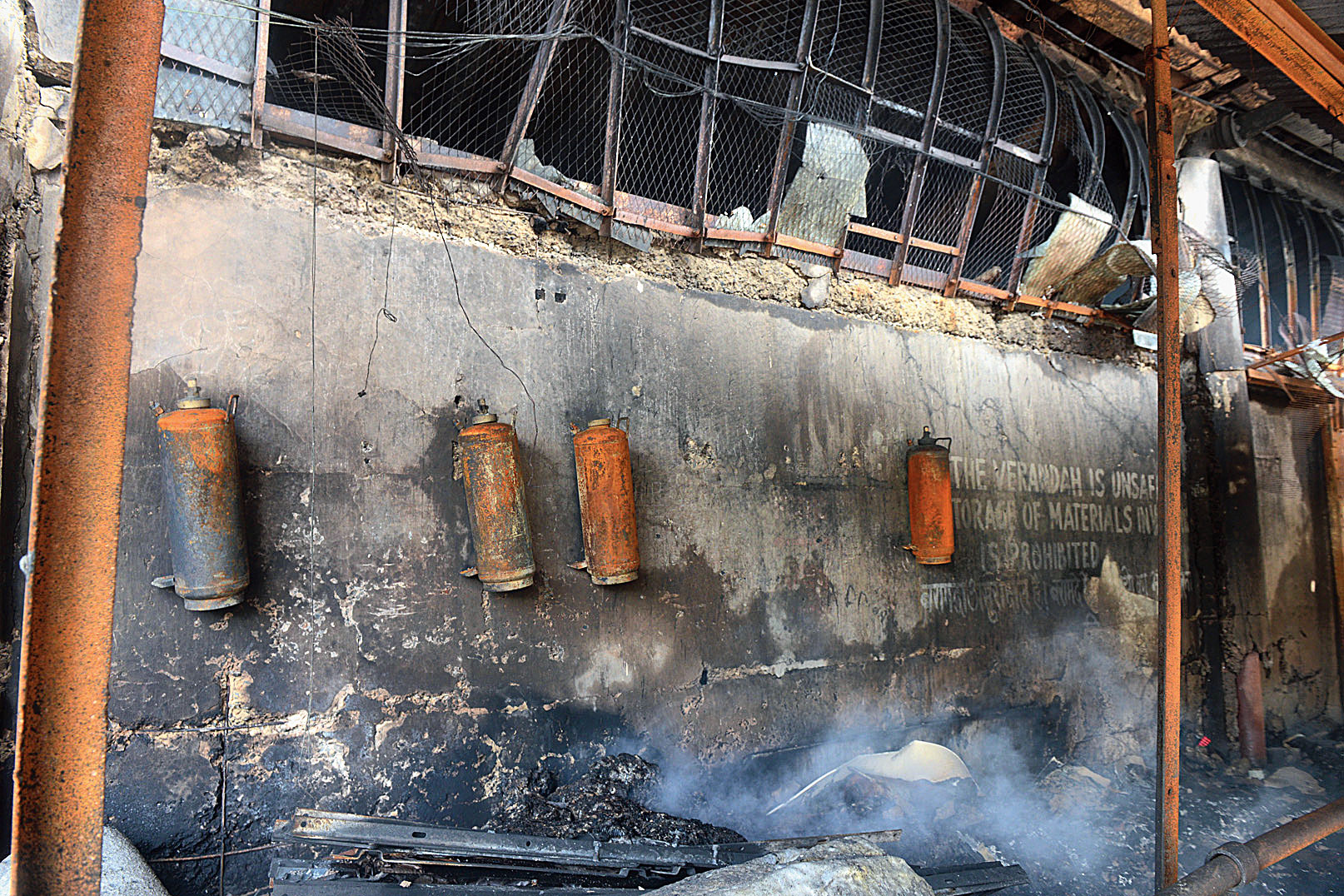 The port trust official said that they had asked all lessees to ensure proper fire safety arrangements in the godowns after a fire broke out in another port trust owned warehouse along the Hooghly in October 2017.

“The responsibility of making fire-safety arrangements lie with the lessee,” said the official. But a retired fire brigade official said that the onus for installing fire-safety measures falls on both the owner and occupier. 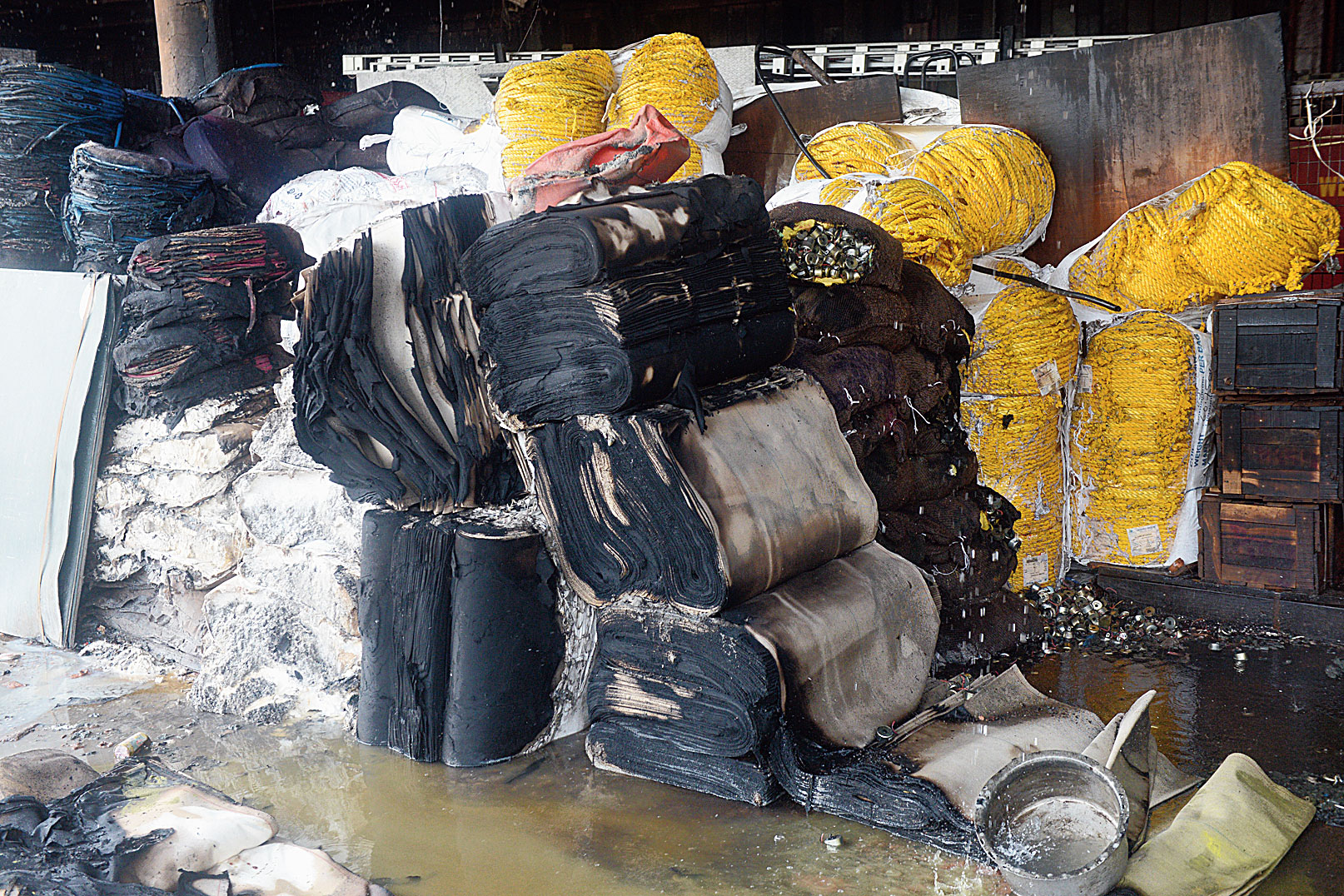 Goods burnt in the fire lie in the godown after the blaze was doused.
Pictures by Pradip Sanyal and Bishwarup Dutta

“The port trust must say what actions it took against the lessee if it didn’t take adequate fire-safety measures despite being told by the port authorities,” the retired official said. 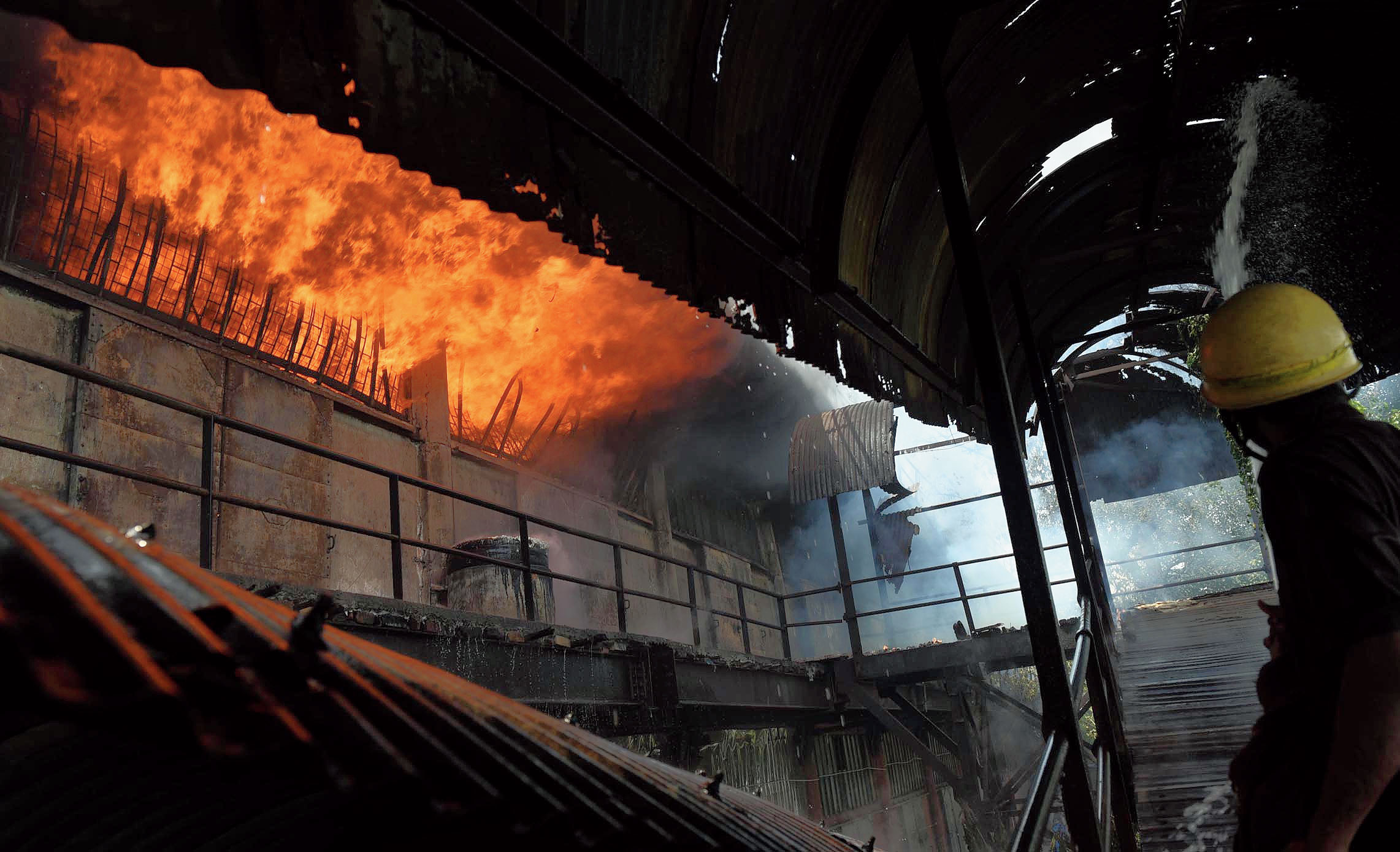 Flames leap from the first-floor godown on Strand Bank Road in Calcutta on Saturday.
Picture by Pradip Sanyal

The fire gutted one of the four godowns run by Inland, JG2. The gutted godown stocked medicines, fabric, tarpaulin sheets, tent cloth, rubber tubes used in bicycles, paints and chemicals among others, said a firefighter.

Though there has been no casualties, Kamal Sarkar, a man who appeared to be in his 40s, fell ill while clearing goods from a godown. He was rushed to Calcutta Medicial College and Hospital.