Glimpses of an unseen city Time travel on tram, bus and carriage 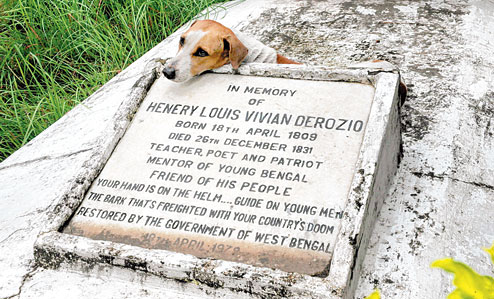 ANASUYA BASU Thirty Readers Of The Telegraph Enjoyed A Tour Of 30 Must-visit Places In The City On Sunday Morning, As Part Of The TT30 Celebrations. Here’s A Look Back At The Third Explore Calcutta Tour   |   Published 06.08.12, 12:00 AM

The morning dew glistens on blades of grass on the Maidan. The white marble of Victoria Memorial reflects the sunlight during a break in the drizzle. An artisan rushes to cover the clay mould of Mahishasura as the rain starts.

The sights and sounds of my city came alive during the third Explore Calcutta tour organised by The Telegraph and Calcutta Walks as part of the TT30 celebrations.

The exploration began on a tram that rumbled out of the Kidderpore depot, the sound of its bells transporting us to another era. It rolled past Fancy Market, the shops still shuttered. Soon the colour scheme outside the window changed to green as we approached the “new” Fort William — the old one was near the GPO.

Faux silver horse-drawn carriages were waiting for us after we got off the tram. I have laughed many times at these garish vehicles but a ride through Red Road on one of them was magical, the breeze whipping the face as I watched the Chowringhee skyline across the lush green expanse of the Maidan.

The carriages halted at the main gate of Victoria Memorial, bathed in sunlight. The white marble was taken from the same quarry as the Taj Mahal, the Calcutta Walks explorer told us. The Taj of the Raj was how he described the monument.

A bus took us to our next destination, the South Park Street Cemetery. The silence there was punctuated by the plaintive call of birds. Gorosthanay sabdhan, we were warned, lest we slip on the thick carpet of moss on the walkway. Strangely, the cemetery was not eerie at all. Perhaps, one should come at night.

The cenotaphs and plaques stood cheek by jowl. A dog stood guard at Derozio’s grave. He apparently does duty day and night.

The bus then took us past various landmarks like the Park Mansions, Asiatic Society and Murshidabad House that was home to Mir Jafar and now stands in utter neglect across St. Xavier’s College. Keeping the Ochterlony Monument to the left, we entered the central business district. We learnt that the red brick structure of Central Telegraph Office has stacks of letters for the dead as letters addressed to Englishmen in the East India Company often reached the city after they had fallen prey to tropical diseases at a young age.

St. John’s Church, with the restored Zoffany painting, the tomb of Lady Canning (after whom is named the syrupy ledikeni) and the mausoleum of Job Charnock, was a top draw. A drive through Chitpur Road brought us to the quaint Chinese church at Tirettabazar.

At the Magen David Synagogue, the largest in Calcutta, we saw the Star of David along with Hebrew script at the entrance. Tall stained glasses let plenty of light into the lofty hall inside. A gallery runs through the entire synagogue for the women to sit separately. Interestingly, with only 30 members of the Jewish community left in the city, the Muslims of Canning Street look after this magnificent synagogue.

The day’s journey ended after a drive through Dalhousie to Tipu Sultan mosque but it only served to whet my appetite for more helpings of my city’s past.

I am already planning my next exploration.