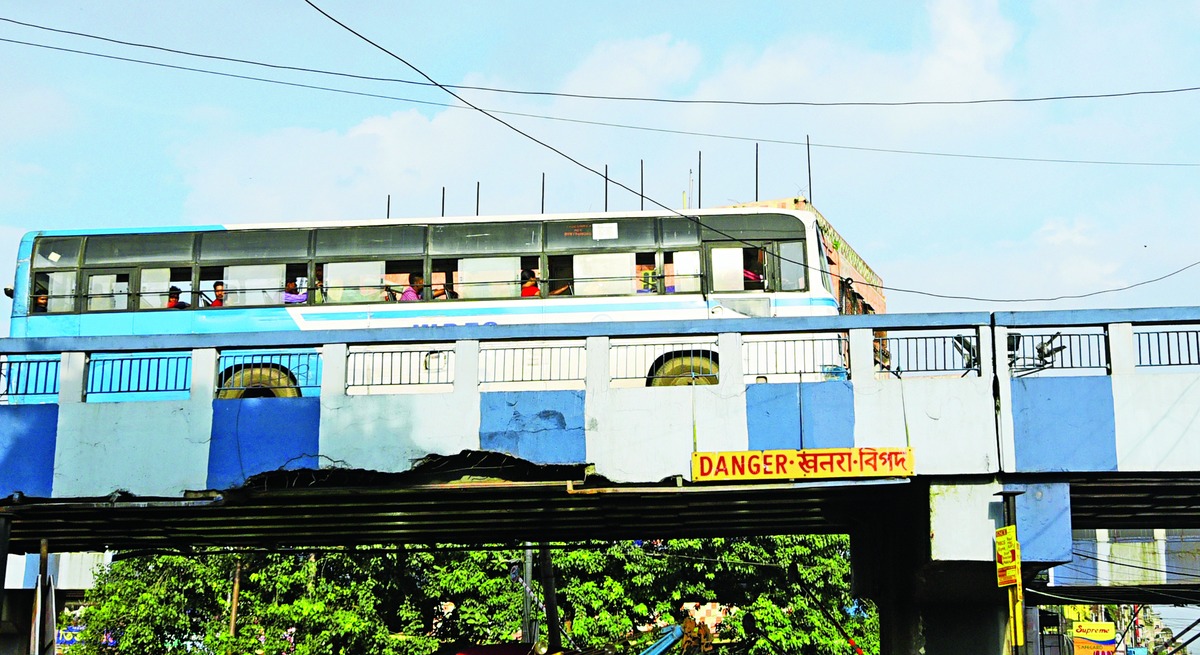 Burrabazar: Chunks of concrete have come off the outer wall of the Brabourne Road flyover, exposing the steel reinforcement within. A sign beside the damaged portion, as seen from Strand Road, screams "Danger. Khatra. Bipad" in bold red letters.

The signage is meant to act as a height warning for heavy goods vehicles but has ended up being an unintended disclaimer that anyone who uses the flyover does so at great personal risk.

Portions of the Brabourne Road flyover, a 40-year-old structure, look bad enough to inspire a chain of panic-mongering WhatsApp forwards. But this isn't just about judging a bridge by its cover. A survey done last year before the first of two East-West Metro tunnels passed under the bridge had revealed that the structure was short on maintenance.

The 1.2km flyover from Burrabazar to Brabourne Road is among the busiest in the city because of its proximity to Howrah and location in the central business district. Ironically, the structure is under the care of the Calcutta Port Trust, the same agency that follows a strict maintenance protocol for the cantilever Howrah bridge.

Like the public works department, whose maintenance of the collapsed Majerhat bridge has been found to be pathetically poor, the port authorities have apparently ignored the health of the Brabourne Road flyover despite warnings about its afflictions.

In its report to the Calcutta Municipal Corporation and the port trust, the Kolkata Metro Rail Corporation (KMRC) had specified what was wrong with the flyover. "The survey was done for eight spans of the flyover. The report pointed out that the expansion joints and bearings of the structure were not functioning properly," said a state government official who was part of the think tank that decided to close the Brabourne Road flyover between July 6 and 11 last year.

This was the period when the East-West Metro tunnel was being bored right underneath the road on which the piers of the flyover stand.

Bridge expansion joints are separations between two decks and are meant to absorb heat-induced expansion and contraction, vibration and jolts caused by subsidence or earthquakes. Under the deck slab are the girders, supported by bearings designed to absorb the vehicular load.

"Most of the eight spans were not in good shape during the survey. They were full of dust and debris. The rubber sockets covering the expansion joints needed replacements along with the bearings," the official said.

More than a year later, the port trust seems to have done little by way of maintenance.

An official said the carriageway of the flyover had been last relaid in 2012-13. The bearings weren't replaced, though.

What makes the flyover even more vulnerable is the constant possibility of container trucks trying to sneak under it and scraping the underside.

"About a year ago, I saw a 10-wheel truck with a container get stuck under the bridge around 11pm . That's when the concrete came off. The tyres of the truck had to be deflated for it to pass under the flyover," said Rajkumar Sonkar, who has shop in the flower market in that area.

The underside of the bridge bears multiple injuries caused by the big boys who have tried to go through.

According to an official of the Howrah Bridge Traffic Guard, there was talk of installing a height barrier a year ago but it never came up. "At night, truck drivers miss the signage because there is no illumination," he said.