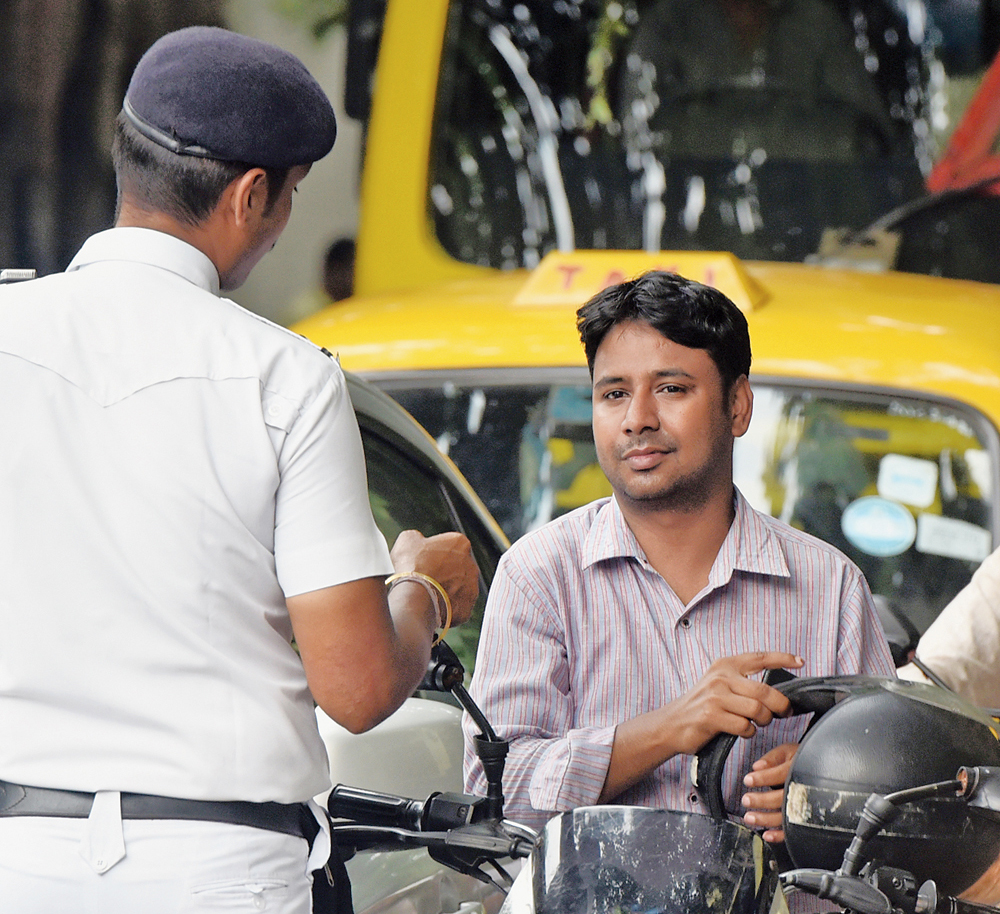 A policeman asks a biker to wear his helmet that was hanging from the handle of his motorcycle on Mayfair Road in Ballygunge
File photo by Pradip Sanyal
Our Special Correspondent   |   Calcutta   |   Published 02.07.19, 10:15 PM

A traffic constable, who tried to stop a helmetless motorcyclist from fleeing after hitting a pedestrian, was dragged by the two-wheeler for about 100m near Quest mall on Monday night.

Tapan Oran, the constable with Calcutta police’s traffic wing who was part of the drive to prevent reckless driving by two-wheelers in the night, suffered multiple cuts and bruises on his elbow, knees and legs.

The biker could not be caught till late on Tuesday. Police said the CCTV footage did not give a clear image of the bike’s registration number.

The police said Oran was dragged along Syed Amir Ali Avenue for at least 100 meters before he lost grip on the bike.

The incident happened at the crossing of Shamsul Huda Road and Syed Amir Ali Avenue around 10.45pm on Monday when a drive against errant bikers was on at a check-post jointly manned by Karaya police station and the East Traffic Guard. An officer present at the spot said a bus was standing when the signal turned red.

“A motorcycle overtook the bus from the rear and came to the front. The motorcyclist was not wearing a helmet. But before he could be caught, the signal turned green,” said the officer.

The bike started moving and hit a pedestrian who was trying to cross over.

“As the bike slammed the brake seconds after it collided with the pedestrian, constable Tapan Oran tried to grab the biker,” an officer in the traffic department said.

The pedestrian, who had been hit, had lost control and was on the road by then. Oran jumped over the pedestrian, got hold of the bike’s rear seat even as the biker tried to flee.

Calcutta police have started drives against errant motorists at night since an incident last month when city model Ushoshi Sengupta was allegedly heckled by a gang of helmetless bikers at the Exide crossing. Every night at least 25 check-points are set up in the city to prosecute motorists violating road rules. In the last few weeks, bikers without helmets and those travelling with more than one pillion rider have turned out to be the biggest offenders.

CCTV footage of Monday night’s incident shows that Oran tried his best to hold on to the bike and run, but eventually fell on the road and was dragged for at least 100meters before he lost grip on the vehicle. Oran was rushed to the Calcutta National Medical College and Hospital.

A senior police officer at Lalbazar said instructions had been re-issued to the officers who conduct the drives that they should click the photograph of the offending vehicle instead of trying to catch them, specially moving ones, to ensure their own safety.

“There is a standing instruction to the force not to try and catch a moving vehicle. The priority is to get the registration number of the offending vehicle. Once the vehicle is identified, it can be prosecuted. But chasing vehicles could lead to dangerous consequences,” the officer said.

Calcutta police commissioner Anuj Sharma visited Oran at the Calcutta Police Hospital on Tuesday evening to hand over a reward of Rs 5,000 for setting a brave example of dedication in duty.

Sharma also held a meeting with senior officers of the traffic department and instructed that traffic cops always keep their body-cameras on while on duty.

“Officers mostly switch on their cameras while prosecuting motorists for drink driving. But it should be switched on for all types of prosecution so that there is footage in case of any controversy later,” said an officer.

As the CCTV footage did not give a clear picture of the vehicle’s registration number, the biker could not be identified till Tuesday night.

Sharma told his officers on Tuesday that the raids would continue and there would be special raids comprising senior officers and force from multiple police stations and traffic guards to send a strong signal to the law violators.