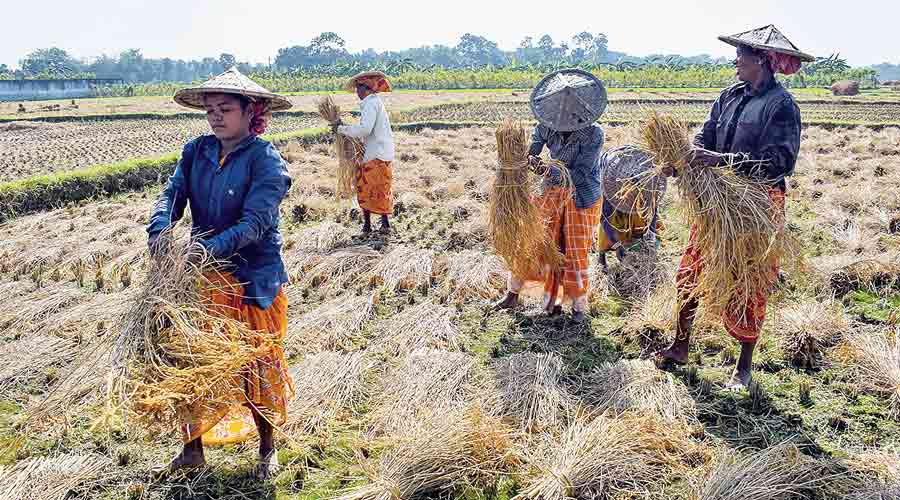 The state fisheries department has directed officials in coastal districts to ensure that no fisherman stays overnight on boats anchored to river banks, in a bid to avoid accidents during the upcoming Cyclone Jawad.

Officials of the state fisheries department have alleged that the “bad habit” of fishermen of sleeping on boats during storms for a “wait and watch approach” on the next day's catch proved risky in the recent past.  “We have told officials to make renewed campaigns among fishermen and their associations so that nobody stays on boat during the upcoming cyclone” a senior official of the state fisheries department said.

On November 10, 2019, at least nine fishermen were killed in South 24-Parganas, apart from over a dozen in Bangladesh, when moored boats capsized and were swept away by tidal waves at Namkhana and Raidighi harbours.

Additional director of fisheries (marine), South 24-Parganas, Jayanta Pradhan, said: “We began campaigning in all fishing harbours along with the fishermen’s organisations so that no one stays on boats. We have appealed to them not to risk their lives.”

The Bengal government asked all district administrations to ensure maximum preparedness for the weekend, and has mobilised allied departments and disaster management wings ahead of the “intensified deep depression” that Jawad is slated to bring.

The Indian Meteorological Department stated that low pressure over the Bay of Bengal  intensified into a deep depression on Friday morning and was likely to turn into a “severe cyclonic storm” by Saturday morning.

Sources said the cyclone is likely to reach the Andhra Pradesh-Odisha coasts on Saturday, and thereafter recurve and move along Odisha to reach Puri with wind speed of 80-90kmph (up to 100 kmph).

The cyclone will supposedly then move north-northwest towards Bengal, triggering heavy rainfall (7-20 cm) in East and West Midnapore. North and South 24-Parganas, Jhargram, Howrah, and Hooghly districts are slated to get heavy rainfall (7-11cm).

Chief minister Mamata Banerjee reviewed the situation on Friday and asked district administrations to arrange relief materials and be ready for “unforeseen situations”.

The government has also issued a renewed notification on Friday to caution residents in these districts, many of whom will be witnessing such an incident for the second time within six months this year, against venturing outdoors and has reiterated its concern about mature crops that might be damaged unless harvested immediately.

South 24-Parganas district magistrate P. Ulaganathan said: “We  stand prepared with sufficient boats, civil defence volunteers, and JCBs (earthmovers) to face the situation. At the same time, we have advised the WBSEDCL, PWD, PHE, health, agriculture departments to be prepared as well.”

In East Midnapore, the district administration has shifted 10,000 persons from low lying areas including Digha, Contai, Ramnagar, Khejuri and Nandigram.

The administration has asked tourists visiting spots including Digha, Tajpur and Mandarmoni not to venture onto the beaches or into the sea. “We have instructed hoteliers to convey the restrictions to their guests. Any adventurous attempts is likely to land them in jail,” an official of the East Midnapore administration said.

To ensure the clampdown, police have deployed nearly 500 civic volunteers as well as NDRF personnel in Digha, Mandarmoni and Tajpur.

All 20 block administrations in East Midnapore have also been equipped with tree-loppers and portable saw-cutting machines for early road clearance in the event of possible uprooting.

East Midnapore ADM (general) Souvik Chattopadhyay said: “We have taken up all possible precautionary measures and are hopeful of handling any type of adverse situations caused by the cyclone.”

Most of the district administrations in South Bengal including in the coastal district have geared up to ensure the early harvesting of crops on Friday, particularly of the ‘Aman’ paddy variety.

The South 24-Parganas district magistrate said that around 11,000 people had been evacuated till Friday evening and all boats that had gone to the sea have returned. He added that the Coast Guards were doing an aerial survey to avert any untoward incident.