He is incomparable as a human being, says actor Prosenjit Chatterjee 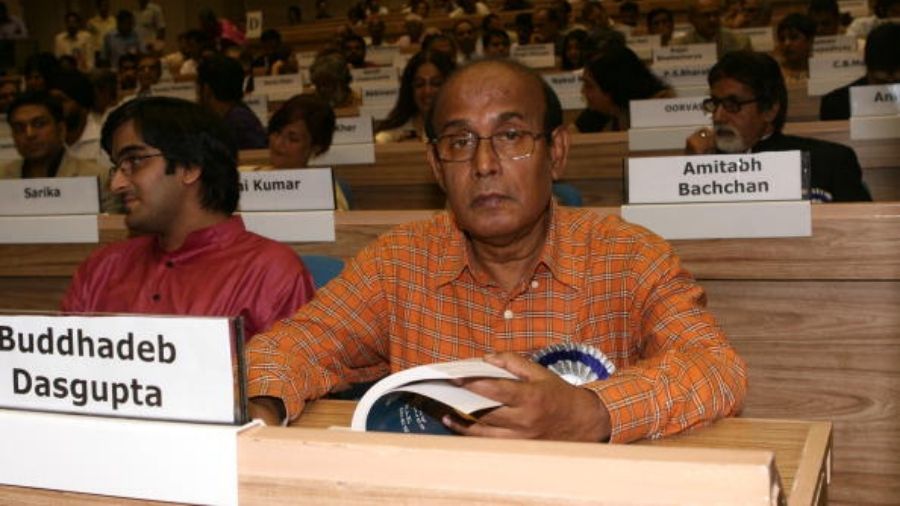 Actors and directors across the Hindi and Bengali film industry, including Prosenjit Chatterjee, Srijit Mukherji and Deepti Naval, remembered celebrated filmmaker Buddhadeb Dasgupta as a "sensitive poet" and "God of cinema".

The 77-year-old National Award-winning director, who had been battling kidney ailments for quite some time, died at his residence in Calcutta early on Thursday following a cardiac arrest, his family members said.

Dasgupta began his career as an economics lecturer in a college before taking a plunge into filmmaking in the '70s, after having enrolled his name as a member of Calcutta Film Society.

Chatterjee, who worked with Dasgupta in the 2004 drama "Swapner Din" and "Ami, Yasin Ar Amar Madhubala" in 2007, took to Twitter and posted a heartfelt note.

The actor remembered him as a "shining name", not just in the Indian cinema but also in the "international film world".

"Fortunately, I had the opportunity to do two films with him and I went with him to various film festivals to find out how much his other genre of cinema is appreciated internationally... Buddha Da is also incomparable as a human being. Be well, stay with us through your work," Chatterjee wrote in Bengali.

Naval posted a picture with the filmmaker from 1984's "Andhi Gali".

Calling Dasgupta one of the finest directors of Bengali cinema, Naval wrote, "I had the good fortune of working with him in a Hindi film called 'Andhi Gali' and since have had a huge regard for Buddha Da not only as a fine director but also as an extremely sensitive poet and a wonderful, gentle human being."

"Urojahaj", which released in 2019, was the last film Dasgupta directed. The Chand Roy Sanyal-headlined drama had its world premiere at MAMI.

Roy Sanyal posted a series of pictures with the filmmaker on Instagram and wrote he was so gutted with the news of Dasgupta's passing away that he was unable to talk to anyone.

The actor, who also worked with him in "Tope" (2017), said his growing up years in Delhi were dotted with Dasgupta's films.

Roy Sanyal remembered the director as a taskmaster and "a man of perfection".

"For a regular Bengali, Buddhadeb was the God of cinema and he leaves behind a great legacy of films. He was in a league of his own. Not in my wildest dreams could I have imagined that at some point in my career, I would actually get to work with him..."

"It's been an honour to have worked with you in 'Urojahaj," actor Parno Mitra wrote on Twitter.

Mukherji said Dasgupta's films, which boast of impeccable storytelling, have shaped up his cinema memory.

Mukherji especially remembered Dasgupta's two films -- 1982 drama "Grihajuddha", which had the Naxalite movement in Bengal of the 1970s as the backdrop, and 1989 drama "Bagh Bahadur", about a man who paints himself as a tiger and dances in a village.

"Even his last film 'Urojahaj' bore the stamp of his class and poetry in every frame. Goodbye, Memory-maker."

Actor Paoli Dam, who worked with him in two episodes of a Doordarshan show in 2008 and "Tope", said Dasgupta's films were a lesson on "filmmaking, philosophy, life and perspective."

"I grew up on Buddhadeb Dasgupta films. And one can imagine how elated I will always feel to have worked with him. It is very rare for any actor to be blessed with a chance to work with a director of that calibre in their lifetime. I got that..."

Actor Sudiptaa Chakraborty said she was fortunate to have collaborated with the filmmaker on two of his projects -- "Mondo Meyer Upakhyan" (2002) and "Kaalpurush" in 2005, which also featured Mithun Chakraborty and Rahul Bose.

"Poet and Filmmaker Buddhadeb Dasgupta is no more. In the post Ray-Ghatak era, he was one of the most celebrated and valued Indian (and Bengali) filmmaker in the international diaspora," she said.

Bose took to Instagram and described "Kaalpurush" as one the most satisfying films of his career.

The actor said Dasgupta was a "part poet, part filmmaker", which was reflected in his cinema, from his storytelling and framing to the sound.

"It took time for me to understand Buddhada's style of direction. But once we understood each other the relationship flowed with ease."

The actor remembered the filmmaker as a sensitive, emotionally acute "with an impish sense of humour" and said he would miss the time spent with him during shootings and travelling to various film festivals.

Filmmaker and Bengal MLA Raj Chakrabarty tweeted his condolences to Dasgupta and wrote, "Recipient of numerous national and international honours, legendary filmmaker and renowned poet, #BuddhadebDasgupta has passed away. Sincere condolences to his family and friends."

"Mirzapur" star Pankaj Tripathi, who worked with Dasgupta on "Anwar Ka Ajab Kissa", said he shared a "very wonderful and loving relation" with the filmmaker.

"He was a master of cinema. I remember we would chat a lot about cinema, life. Later I met him at a film festival and I have always loved being around him. It is a sad day today for all of us but his cinema will stay alive among us," he said.

Dasgupta is survived by his wife and two daughters from his previous marriage.