CM joins chorus of protest against the farm bills passed on 'black Sunday' and the suspension of eight Rajya Sabha members, including two from the Trinamul Congress 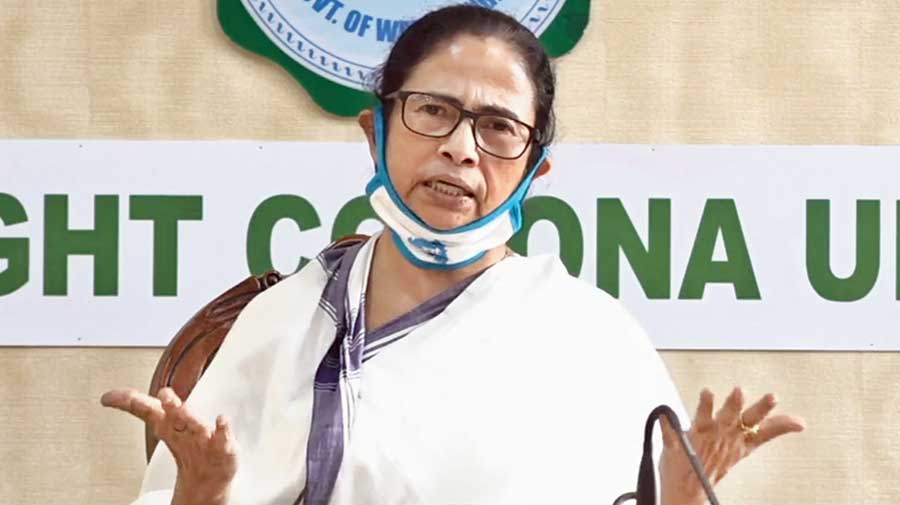 Mamata Banerjee on Monday called Narendra Modi “the naked king”, his government “fascist” and accused the BJP of killing democracy as she joined chorus of protest against the farm bills passed on “black Sunday” and the suspension of eight Rajya Sabha members, including two from the Trinamul Congress.

Hours after the Prime Minister had himself issued a statement, defending the Centre’s farm legislations, the Trinamul Congress chief alleged Modi was running the nation in a “Hitleresque fashion”, pushing it to a famine, while promising to take the fight on the floor of the Parliament to the streets.

“Robbing everyone in broad daylight…. Disempowering everybody else. Only one will rule from a room? Why do we keep warning ourselves about Hitler? The country is being run in a Hitleresque fashion. Total fascism being used to run it…. History will remember yesterday as a black Sunday,” said Mamata in a news conference in the evening.

“Misleading the people totally. O naked king, where are your clothes (reference to Hans Christian Andersen’s 19th century literary folktale The Emperor’s New Clothes)? If now the people ask that, what will the BJP say in response?” asked the Bengal chief minister.

Aware of the importance of issues such as farmers’ rights, Mamata announced not only her own party’s movements but also urged all nonBJP forces to come forward for the farmers and the common man.

On Monday morning, soon after the Rajya Sabha suspended the eight MPs, including Trinamul’s Derek O’Brien and Dola Sen, for the remainder part of the monsoon session over their “unruly behaviour” during the passage of the farm bills, Mamata took to Twitter.

“Suspension of the 8 MPs who fought to protect farmers interests is unfortunate & reflective of this autocratic Govt’s mindset that doesn’t respect democratic norms & principles. We won’t bow down & we’ll fight this fascist Govt in Parliament & on the streets. #BJPKilledDemocracy,” she posted. With her party and poll strategist Prashant Kishor’s IPac picking it up the hashtag “#BJPKilledDemocracy” began trending nationally on Twitter, with tens of thousands of tweets in a matter of hours.

Having generated noise on social media, Mamata went to the mainstream media in the evening.

“The Centre is enabling the rise of middlemen, who will rob the farmers in broad daylight…. Deliberately pushing the nation into a famine. The pandemic, Corona is on, which they couldn’t prevent… now they are creating a famine and telling farmers mawro na (go die). This is reminiscent of the Bengal Famine of 1943 under the British Raj,” she said at a news conference.

Mamata said what had happened on Sunday was, at best, “utterly condemnable”.

“Working for the people, we do not care about a censure motion from the BJP. We think Trinamul Congress and other Opposition parties, what they did together, did absolutely the right thing. We are proud of them. Whom the BJP censures does not matter, because the people across the country are censuring the BJP,” she said.

For the first time since her anticitizenship matrix movement — discontinued because of the pandemic — Mamata gave a call for a panIndia joining of forces against the BJP.

“We think now is the time for every (non-BJP) party across the nation to build movements…. I am all for this panIndia alliance with the people. For that, if Trinamul has to take the backseat, I am readily willing. The people should occupy the front rows of this. Let the parties back them from behind. This BJP government must go,” she said.

“These are dangerous times for the whole nation. Lies are presented as truths and truths as lies, through the abuse of social and mainstream media by the BJP, for years now. Anybody raises a voice for the truth, they will raise questions on their patriotism. Do not teach us patriotism, Bengal is the birthplace of the very sentiment,” she added.

Mamata accused the Modi government of trying to further make the labour codes unfavourable for employees.

“Economy destroyed, they failed on all fronts…. They cannot even catch an earthworm, but have the audacity to chase pythons,” she said.

State Youth Congress chief Shadab Khan led a protest against the farm bills outside the Raj Bhavan in Calcutta on Monday afternoon.

After a demonstration and “gherao” of the Raj Bhavan, Khan and some other participants in the programme were detained by the police from the site and released later.

Similar programmes were carried out in all district headquarters across the state by the youth wing of the Congress.