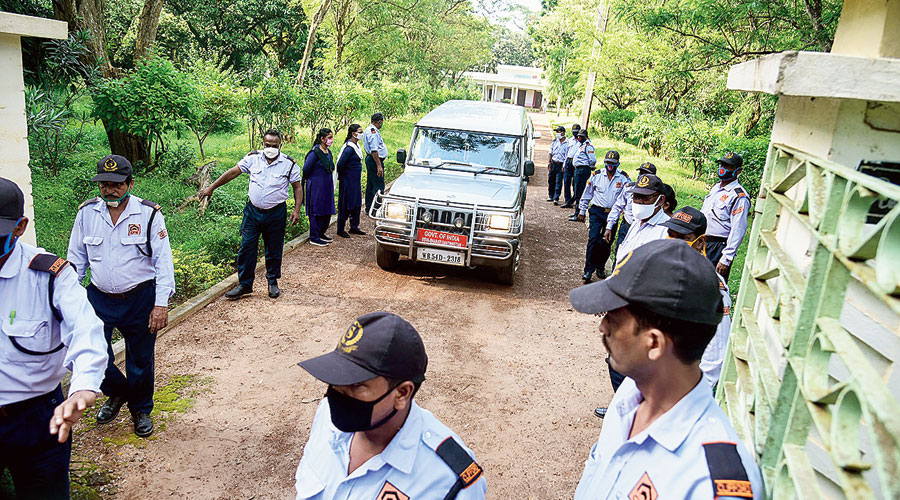 A two-member team of the Enforcement Directorate on Thursday came here for a two-hour closed-door meeting with Visva-Bharati vice-chancellor Bidyut Chakrabarty and officiating registrar Ashok Mahato.

The central agency that deals with economic offences was asked to probe the source of funds that had apparently been mobilised for the vandalism on varsity campus on August 17 over protests against a boundary wall on Pous Mela ground.

“It was a closed-door meeting of ED officials with the VC and officiating registrar. They held preliminary discussions and said they would visit the campus again,” said a varsity official.

Many see the involvement of the ED as an attempt by the Centre to nail the Trinamul, whose leaders, including MLA Naresh Bauri, were accused by the central varsity authorities of mobilising the mob on campus. ED sources in Calcutta said the team, consisting of officers of assistant director rank, visited Santiniketan to find out if there was a cognisable offence that merited a probe by the central agency.

On their way back to Calcutta, the ED sleuths went to see the vandalised gate and the Pous Mela ground. However, the officials did not get down from their car.

Earlier, the ED had sent a letter to Birbhum police seeking copies of five FIRs lodged over the incident of vandalism and construction of a wall on Pous Mela ground. They had also sought action-taken reports in all the five complaints. Police sources said they were yet to send any such document to the central agency.

“We have not sent any document related to the case as we are carrying out our own investigation,” said a senior police officer.

Leaders of Bolpur Traders’ Association, who have been accused by Visva-Bharati of taking part in the vandalism, said the ED should find out whether the tender process to construct the boundary wall had been done properly.

“If ED officials talk to us, we will request them to inquire into the tender process that was issued to construct the wall on the Pous Mela ground. The Rs 90-lakh tender was done without going through the stipulated process of e-tendering process. We will request the ED to look into the role of the varsity authorities, including its VC who is yet to return the security deposits worth Rs 1 crore of around 1,500 traders,” said Subrata Bhakat, treasurer of the traders’ association.

The varsity had taken security deposits from traders for taking part in last year’s Pous Mela.

In a related development, the contractor assigned to build the wall has submitted a report that he had suffered a loss of Rs 6 lakh because of the vandalism.

The ED team of officers from the agency’s Calcutta office reached the varsity’s central office at 11.45am. After the meeting, they went to the Ratan Kuthi guest house and stayed there for an hour. The team left Santiniketan around 3pm.

“After refreshments at the guest house, the team left Santiniketan and the varsity’s security personnel escorted the team up to the Birbhum border,” said a source.