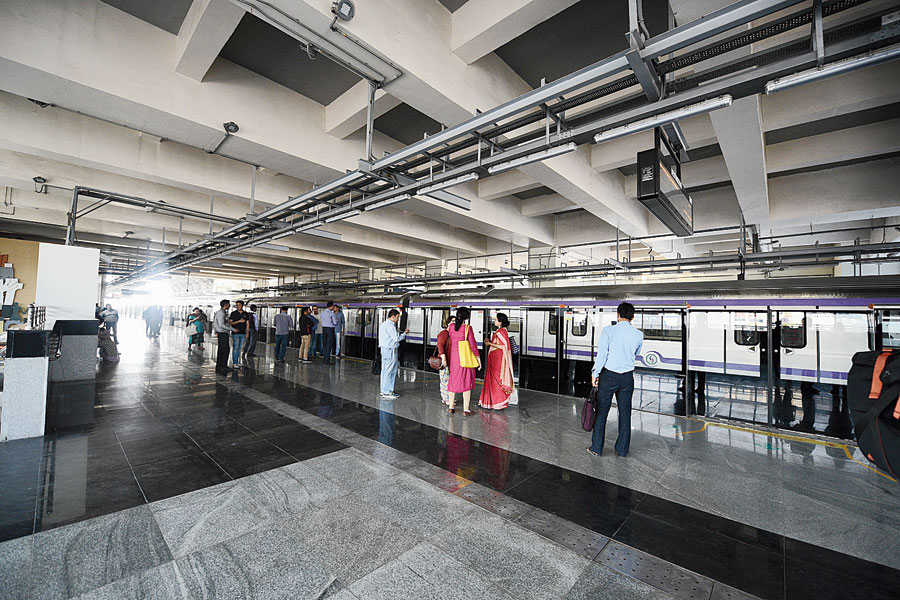 More signage, better information and communication system and platform screen doors — Calcuttans got a taste of East-West Metro on the first day of its commercial run on Friday.

Trains ran on a 5km stretch between Salt Lake Sector V and Salt Lake Stadium stations, which was unveiled on Thursday. A large number of seats on almost every train were empty throughout the day.

The first trains in either direction started at 8am and the last trains at 8pm.

Once the entire 16.5km corridor is functional, trains will run between Sector V and Howrah Maidan. A 500m stretch will be under the Hooghly river.

Each coach has information display boards where the names of the station coming up and the end station are displayed, along with the time and date. The display is in Bengali, English and Hindi.

Announcements are also being made at the stations about the approaching trains. Display boards at the platforms are giving real-time information about a train’s arrival.

The doors of the East-West trains are wider than the north-south ones.

The platform screen doors are helping in two ways. Apart from preventing suicides and accidents, they are helping passengers know the position of the train doors.

On Friday, passengers were seen standing in front of the screen doors. Metro officials said this would make boarding easier compared with the north-south line, where passengers have no clue where the doors would be, resulting in commotion.

A Metro official said that at least once on Friday, the doors of a train didn’t open because they were not aligned with the platform screen doors. “The doors opened on second attempt,” the official said.

This newspaper had earlier written about how drivers were having problems aligning the train doors with the platform screen doors during the trial. 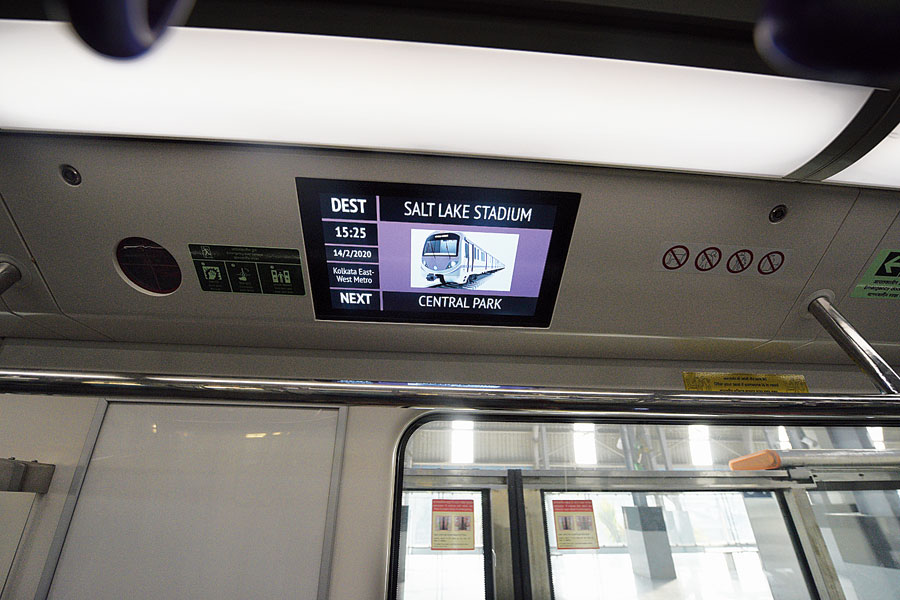 A display board inside an East-West Metro train

Each station has washrooms in the passenger area. There are boards showing the location of the washrooms. The north-south line does not have the facility.

Each station has ample signage guiding passengers to platforms, booking counters, washrooms and other areas. Once a passenger steps on the concourse level, there are boards displaying the direction to the platform from which a train is leaving. After getting off a train, too, passengers will be guided by signage to the exit.

East-West Metro is not free of niggles as of now. Here are some of them.

The automatic ticket vending machines are not functional. At Sector V station, Metro saw some passengers trying in vain to operate a machine.

A Metro official said the software needed to make the machines functional is yet to be integrated. “The integration is on,” the official said.

The train this newspaper boarded at Sector V station was broadcasting a message that it would travel till Howrah Maidan. The passengers were confused.

“The service is open till Salt Lake Stadium, right?” asked a commuter. Minutes later, the correct announcement was made.

“There must be some mistake, which we’ll rectify,” the official said.

In at least two stations, Sector V and Salt Lake Stadium, only one ticket counter each was open. As a result, long queues had formed despite there being only a handful of passengers.

“If there are more passengers, we have provisions to operate more counters. Passengers won’t be inconvenienced,” said Metro Railway spokesperson Indrani Banerjee.