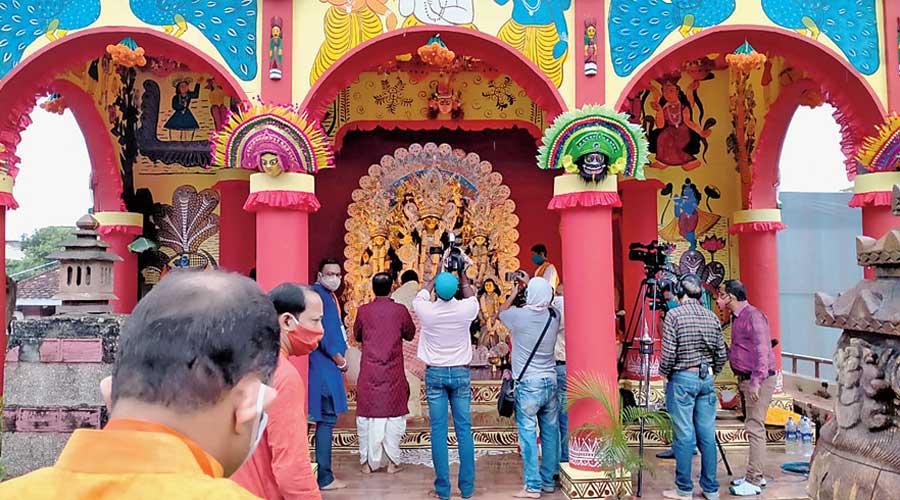 The Bengal BJP seems to have no interest in organising its Durga Puja this year as no prominent leader is keen on shouldering the responsibility of conducting the four-day affair launched virtually by Prime Minister Narendra Modi in 2020.

Multiple sources in the BJP have said as of now, there is no confirmation on whether the party’s Puja will be held this time or not.

“Even small local clubs have begun preparations for the Puja. We have not as yet and that’s what I can tell you as of now,” said a state BJP leader.

During the Assembly election campaign, several central and state BJP leaders promised that they would take the autumn celebrations to a global scale after coming to power in the state. At meetings after meetings, Modi and Amit Shah shed tears on how the Mamata Banerjee government had compromised with Bengal’s sentiment by imposing restrictions on idol immersions in a few years when the ritual and Muharram coincided.

Sources in the BJP said a section of state leaders, such as those close to Trinamul turncoat Sabyasachi Dutta, thought that discontinuing the Puja would be a blunder, but that realisation hadn’t led to any action at the ground level.

According to a state office-bearer, informal discussions on whether the BJP would organise a Puja this year did take place, but no decision could be reached as no senior leader was willing to take the ownership of the Puja.

“We know Dilipda (state BJP chief Dilip Ghosh) is against this Puja. But some of us have spoken to other leaders about the need to organise the Puja this year as well.… Let’s see what happens...”, a state BJP functionary told The Telegraph.

The uncertainty about the Puja is primarily because of the sudden decline of the faction — one of several in the bitterly divided party — led by Bengal BJP minder Kailash Vijayvargiya and Mukul Roy as they were behind the Puja last year.

The BJP had held its Puja in 2020 at Eastern Zonal Cultural Complex in Salt Lake, near Calcutta.

“Kailash-ji has not been seen here since the election results on May 2, and Mukul-da has gone back to the Trinamul Congress.… So, the leaders in their faction have lost prominence and are in no position to organise Puja,” said a source.

Leader of the Opposition Suvendu Adhikari is yet to reveal his stand on the issue, but sources in the party said he was unlikely to take charge of an event that was started by Mukul Roy.

The change in the mood about Durga Puja in the BJP can be linked to the electoral debacle that created a kind of despondency in the party.

Multiple middle-level leaders in the BJP, most of whom are old-timers, told this correspondent that discontinuing with the Puja would further damage the party as several questions would be raised about what the senior leaders had been saying in public.

“Until a few months ago, we had been trying to prove the BJP’s Bengali credentials.… This approach led the party to organise last year’s Puja and if we discontinue it this year, it will look so odd,” said a source.

Sayantan Basu, a state BJP general secretary said: “It isn’t a political party’s job to organise a Durga Puja.… But nothing has been decided by the party as yet.”