While Duare Sarkar has given Bengal govt a chance to showcase its human face, the huge turnout has also thrown up challenges for Mamata Banerjee and her ministers 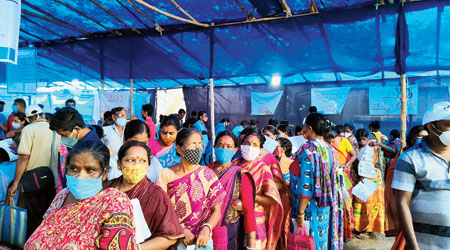 Duare Sarkar, the scheme that takes the Mamata Banerjee government almost to the doorstep of homes in Bengal, had clocked 2.67 crore footfalls by Monday, less than a month after its second edition was flagged on August 16.

Officials are estimating the count to touch 3 crore next week, making it the biggest government outreach programme anywhere in the country.

The unparalleled response carries with it not only the heart-warming glow of having been able to connect directly with such a multitude in the state government’s effort to deliver welfare but also daunting challenges.

Duare Sarkar is an outreach programme under which government officials set up camps in a locality to receive applications from the residents of the neighbourhood who wish to enrol themselves to access welfare schemes or get corrected caste certificates and documents linked to land. The first edition of the programme is also credited with helping the Trinamul government storm back to power.

“The second round is a huge success if we compare it with the first edition of the Duare Sarkar camps earlier this year when 1.75 crore footfalls were recorded. It is the biggest public outreach programme organised by any government in the country,” said a senior government official.

According to the officials, the massive reach of the programme makes it a unique model that is likely to be followed in other parts of the country.

“In India, public outreach initiatives have been limited to immunisation programmes like Pulse Polio drops. The Bengal model of Duare Sarkar is indeed an experiment that has recorded unprecedented success.… There is little doubt that it will be replicated in other states,” said a bureaucrat.

It is expected that the scale and scope of the welfare drive, which is perceived to have helped the Mamata government neutralise anti-incumbency in the Assembly elections, will be expanded in the coming days, the officials said.

“The ruling party is set to make this reach out a hallmark of its governance ahead of the 2023 panchayat elections and the 2024 Lok Sabha polls by taking government services to the localities,” a source said.

While the initiative has given the state government a chance to showcase its human face in the time of the pandemic, the huge turnout has also thrown up challenges that the Mamata government has to address in the coming days.

Sources said the number of applications through the camps suggested that the initiative would saddle the state exchequer with an additional expenditure of at least Rs 25,000 crore.

“The government will have to shoulder a burden of Rs 17,000 crore under the Lakshmir Bhandar scheme. Another Rs 8,000 crore is estimated to be required to run schemes like the enhanced Krishak Bandhu programme (direct benefit transfer to farmers) and other pension plans, beneficiaries of which would be much more than the initial estimates,” an official said.

According to him, unless the state government takes measures to augment its revenue generation, the initiative — likely to be repeated in the coming years — cannot be pursued in its existing format.

The other challenge is the continuous delivery of the promise of services, which is the main objective of these camps.

A section of the officials said that people had started lodging complaints that the Swasthya Sathi cards were not being accepted by some private hospitals and nursing homes.

“The health department is flooded with complaints of Swasthya Sathi cards being refused. It has been found that bills under the scheme are being cleared after a few months and the private hospitals are not ready to accept the delay in payment. This does not send a good message about the pet project of the state government,” an official said.