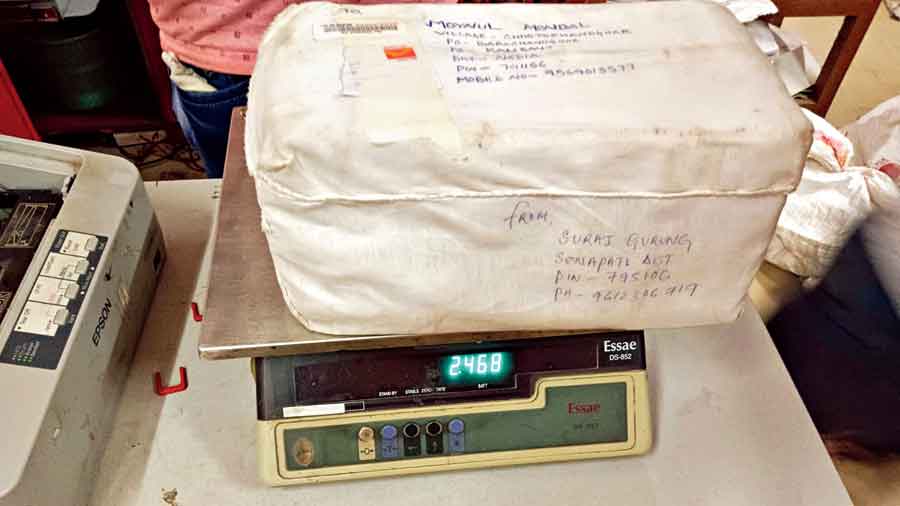 Northeast-based drug dealers have allegedly been using the Indian postal service to deliver consignments to Bengal, the issue coming to the notice of the Special Task Force (STF) of police following a suspicious parcel that arrived at a post office in Nadia district.

The parcel, which arrived last Wednesday, was found to contain 2.468 kilos of a crude opioid.

Acting on a tip-off on the parcel sent from Senapati district of Manipur, the STF laid a trap and asked a senior official of the Meera post office in Nadia’s Kaliganj to call consignee, Moynul Mondal of Baro Chandghar village, to collect it from the post office on Friday.

Smelling trouble, local trader Moynul sent his relative Abbas Mondal to collect the parcel. Abbas was asked to open the parcel at the post office which revealed the contraband item.

The STF officials immediately arrested Abbas as he tried to escape and booked him under the relevant sections of the Narcotic Drugs and Psychotropic Substances (NDPS) Act. Moynul has gone absconding since.

Abbas was produced before a court in Krishnagar on Saturday which ordered 10 days of police custody.

The STF has begun a probe to see if any employee of the postal department was involved with the racket and the authenticity of the sender’s name on the parcel.

Police sources in Krishnagar said that several suspected parcels delivered in several areas under Kaliganj block in June made intelligence officers curious. The issue was eventually handed over to the STF who in its probe discovered that a drug smuggling network was allegedly using the postal services in Nadia's Kaliganj, Plassey and adjacent areas of Murshidabad Rejinagar, which also has suspected links to Bangladesh.

Sleuths have claimed that using the Indian postal service appears to be convenient for smuggling rackets, especially in rural areas.

“It came to our notice that drug suppliers have begun using the postal services network to deliver drugs through parcel, particularly in remote rural areas where alertness among postal employees is limited with poor surveillance and scanning facilities,” an investigating officer said.

“In most such post offices, parcels are not scanned and the identities of the consignee and sender are seldom examined. Smugglers have been exploiting this situation,” the officer added.

A senior postal official of Nadia North Circle superintendent’s office admitted to their limitations. “We don’t have any mechanism to scan the parcels. There are certain problems with scanning the content too as it might infringe privacy. Usually, a declaration (on the item)  is obtained from the sender.… But there is little scope to check if the person is sending what he has stated in the declaration.”