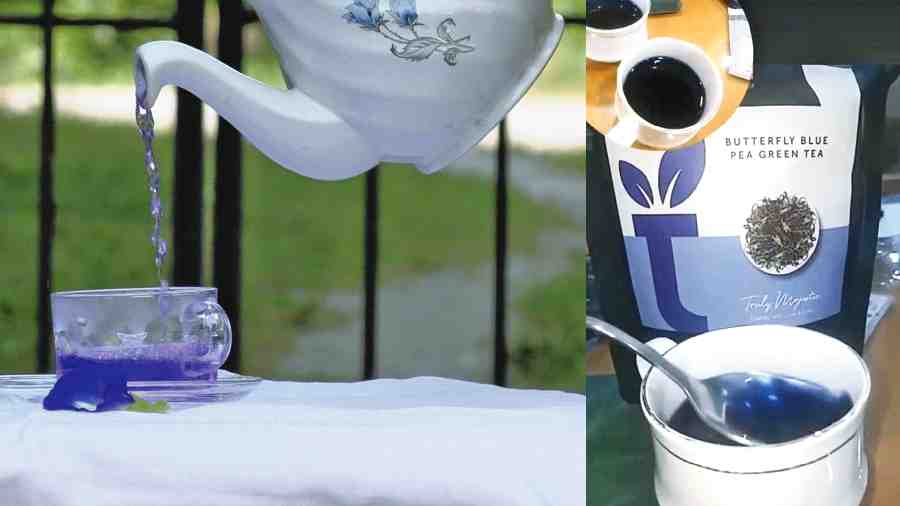 The Majherdabri tea estate on the outskirts of Alipurduar town has come up with blue-coloured green tea that it has sold for Rs 6,500 per kilo.

“We are the first tea estate in the Dooars to prepare the blue pea green tea. Initially, we had produced only 5 kilos of the tea but sold within a short span. Each kilo of the tea was sold at Rs 6,500. Curious tea drinkers bought it from us,” said Chinmay Dhar, the garden’s manager.

The tea, sources said, was prepared by mixing the extract of Asian pigeonwings (Clitoria ternatea), a common blue flower known as Aparajita in Bengali.

Earlier, Majherdabri came up with other specialty teas such as white tea and moonlit tea. They intend to merchandise these special varieties through their own outlets and other sellers, garden sources said.

South 24-Parganas district administration launched 11 decorated totos to use them as mobile units of Duare Sarkar facilitation counters at Sagar island on Wednesday.

Since several areas in Sagar block are difficult to access, the local administration formed a special team of officials in the special outreach of the state government.

On the first day of the programme of this ongoing fourth phase of Duare Sarkar camps, the mobile units visited Dhaspara Sumatinagar-II gram panchayat areas, the BDO added. Officials of Balagarh block, Hooghly, visited Janotosh Mukherjee, 85, the grandson of mathematician and barrister Ashutosh Mukherjee, to get him enrolled under the old-age pension scheme.