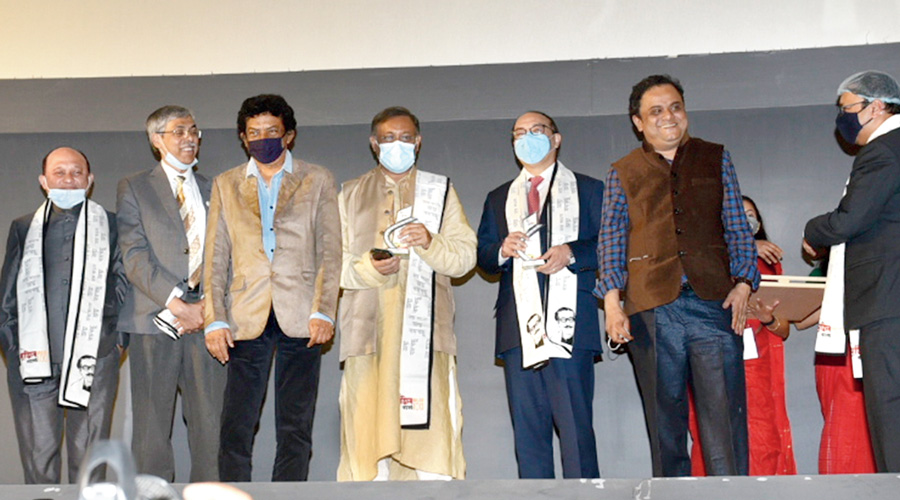 Hasina: A Daughter’s Tale, a 2018 docudrama on the life of Bangladeshi Prime Minister Sheikh Hasina, was screened at Nandan-I during the inauguration of Third Bangladesh Film Festival in Calcutta on Friday.

The film festival is part of a bouquet of programmes that the country’s information ministry and the deputy high commission in Calcutta are hosting in the city to commemorate Father of the Nation Bangabandhu Sheikh Mujibur Rahaman’s birth centenary and the 50th year of Bangladesh’s independence.

Bengal minister Bratya Basu and indian foreign secretary Harsh Vardhan were present at the inauguration (in picture by Bishwarup Dutta) of the film festival.

The film — directed by Piplu Khan and produced by the Centre for Research and Information and Applebox Films — on Hasina has won international acclaim not only because of its narrative, but also because it has shown untold stories from Hasina’s life. In an attempt to get a peak into her life, the camera has followed her inside her kitchen and library.

“Sheikh Hasina’s life with all the twists and turns and her journey as the daughter of Bangabandhu Sheikh Mujibur Rahman has come alive on screen and we think all of you will like it,” said Muhammad Hasan Mahmud, who inaugurated the film festival. Thirty-two Bangaldeshi films would be screened at the festival.

On account of popular demand, the film on Hasina would be screened again at Nandan-II on Sunday evening, said the organisers.

It took around five years to make the one-hour-ten minute film, which captures through Hasina’s eyes the heyday of freedom struggle in Bangladesh, the capturing of her father by the Pakistani forces and finally, the assassination of Bangabandhu and his entire family. Several commentators have called the film, narrated in her voice, a brief history of Bangladesh as Bangabandhu is at the centre of the neighbouring country’s history.

“Bangabandhu is an asset of both the Bengal on two sides of the border as well as that of the world… People involved in the world of art and culture on two sides of the border should come forward and collaborate in making films on Bangabandhu and the Liberation War and that would be a befitting tribute to this great man,” said Bratya Basu, science, technology and biotechnology minister in the Mamata Banerjee cabinet.