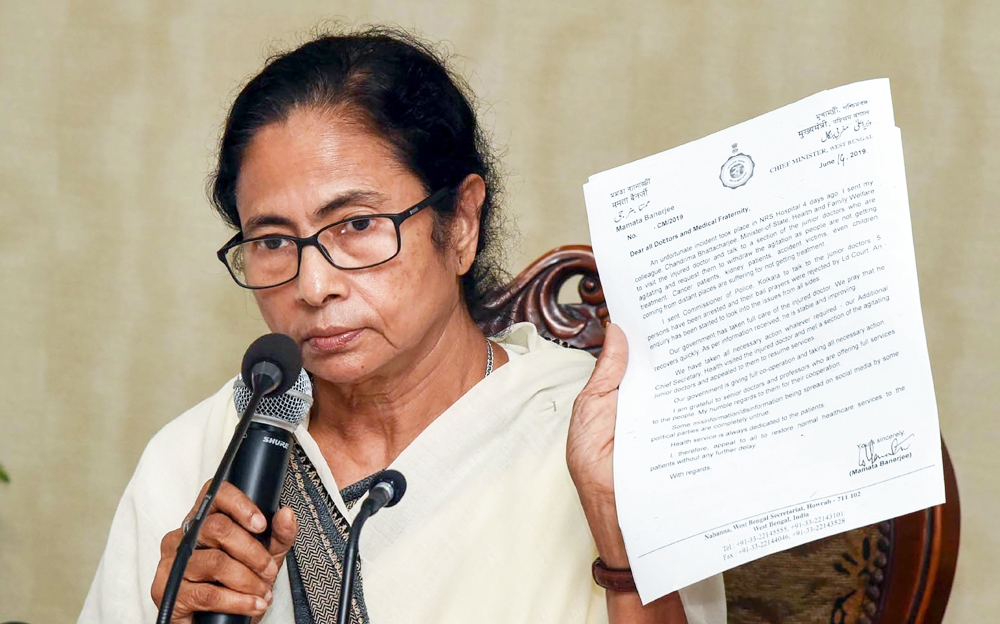 “We had been unsuccessful in bringing the junior doctors to Nabanna. But today I heard they have finally decided to go for talks with the CM at her chosen venue. We are keeping our fingers crossed. It’s high time the standoff was resolved and patient services resumed,” said physician Sukumar Mukherjee, who had led a team of five doctors to speak to Mamata at Nabanna on Friday.

“The CM waited for them for hours on Friday and we again sought time on Saturday and she had agreed. But on Saturday too, we failed. But since they have agreed now, we are happy despite our failure.”

Several senior doctors who have expressed solidarity with the juniors have also been trying to persuade them to resume their duties once the chief minister changed her tone and adopted a flexible approach.

One such doctor at SSKM who did not wish to be named said the junior doctors at NRS were showing maturity in taking decisions.

The doctor, one of 180-odd who had signed a mass resignation letter at SSKM, said he would withdraw his resignation if the problem was resolved.

“We had signed the mass resignation letter for two reasons. We wanted to show solidarity with the junior doctors and also use it as a tool to pressure the government. But all along, we were hoping the problem would be resolved amicably. Now that things have started moving towards that, we expect normality to return,” he said.

He said senior doctors were working overtime to keep the emergency wards and outpatient departments functional. “Despite our efforts, most of the wards are only partially functional. It’s not possible to treat thousands of patients at government medical colleges with only senior doctors. It’s possible for a few days but we need the support of junior doctors for smooth functioning,” the doctor said.

Doctors at private hospitals too felt the talks should take place at the earliest.

“The deadlock between the government and the junior doctors needs an immediate solution. The security of the doctors, paramedics and institutions must be ensured as it’s not possible to work under fear and duress,” said Gautam Mukhopadhyay, surgical oncologist and secretary of the Bengal Oncology Foundation.

“Every professional has the right to demand a safe and congenial environment at the workplace. The sufferings of the common people have to be given priority and the government must come up with a viable solution, safeguarding the interests of all,” said Mukhopadhyay, who visited NRS during the day.